Friction with US may affect Turkey's trajectory in NATO

US President Donald Trump and Turkish President Recep Tayyip Erdogan shared a fist bump in Brussels, but a figurative fistfight continues between Congress and Ankara. 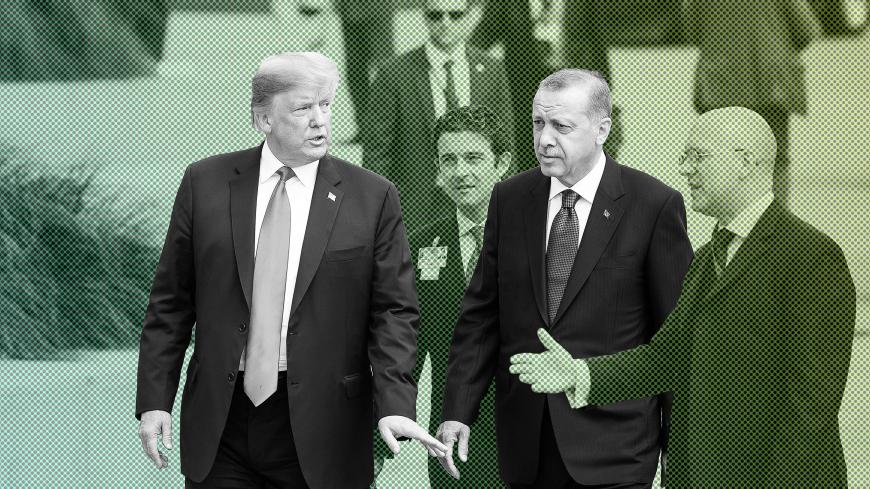 The NATO summit in Brussels July 11-12 witnessed amicable fist bumping between US President Donald Trump and President Recep Tayyip Erdogan of Turkey. The interaction was particularly noteworthy given the unprecedented row that took place between Trump and European leaders. His jovial gesture stood in stark contrast to his bellicose posturing with others.

When Trump reportedly said of Erdogan, “I like this guy,” Turkey’s pro-government media — and nearly all Turkish media is controlled either by the government or by pro-government figures — welcomed the remarks. The Turkish side interpreted it as America's endorsement of Turkey’s increasingly autocratic leader at a time when his image and relations are ebbing with the West in general.

In a previous Al-Monitor piece written on the eve of the NATO summit, I predicted the meeting would be considered Erdogan’s first foreign policy test following his June 24 electoral victory. I emphasized that he would pass that exam easily, as the other attendees would be preoccupied by the expected tension between Trump and other European leaders and the upcoming Helsinki meeting between Trump and his Russian counterpart, Vladimir Putin. I was right about that, but I hadn't predicted Trump would go so far as to say he actually likes Erdogan and the two would share a strongman "bro" moment.

After such a show in Brussels, many people believed the release of jailed American pastor Andrew Brunson was a foregone conclusion. Alas, a Turkish court rebuffed appeals to free Brunson, and the trial was adjourned until Oct. 12.

Trump expressed his disappointment in a July 19 tweet, writing, “A total disgrace that Turkey will not release a respected U.S. Pastor, Andrew Brunson, from prison. He has been held hostage far too long." Trump also called on Erdogan to do something to free the pastor: “He has done nothing wrong, and his family needs him."

The reaction in Congress was harsher. Senators led by Foreign Relations Committee Chairman Bob Menendez (D-N.J.) and Bob Corker (R-Tenn.) introduced bipartisan legislation "to restrict loans from international financial institutions to Turkey until the Turkish government ends the unjust detention of US citizens." Sen. Jeanne Shaheen (D-N.H.) had visited Turkey and met with Erdogan trying to secure the pastor's release days before his hearing. Ankara responded to the accusations with a well-worn line about Turkish courts being independent. That argument was quite unconvincing, particularly as Turkey has been using it for the past two years.

The heightened friction between Washington and Ankara is expected to affect NATO as well.

However, the American administration is still puzzled by how to deal with Erdogan and doesn't want to take the blame in the long-running game among European leaders of “Who lost Turkey?” For instance, US Secretary of Defense James Mattis wrote a letter July 7 to both the Senate and House Foreign Relations Committees to ease their objections to the sale of US F-35 fighter jets to Turkey. Mattis said preventing the sale would remove Turkey from the NATO supply chain and in turn disrupt the alliance’s defense capabilities. Yet, despite Mattis’ calls, Congress could amend the US defense authorization bill at the last moment to impede the sale of 100 F-35s to Ankara until a report on Turkey’s purchase of S-400s is submitted.

Brunson has been suddenly granted a transfer to house arrest in a surprise reversal, but the damage had already been done. According to Aviation Week's Pentagon editor, Lee Hudson, Brunson's treatment has caused the United States to re-evaluate all military sales to Turkey, not just Lockheed Martin's F-35s.

Turkey is an important ally that continues to participate in NATO missions such as Afghanistan and to use parts of NATO missile defense systems. Yet the S-400 missile system is not only incompatible with NATO systems, it's considered a threat to the F-35. For NATO, Turkey still remains relevant to Western defense today, as it was during the long years of the Cold War. Thus, a possible rift over military cooperation between Turkey and the United States would inevitably have a negative impact on NATO as well. This is exactly what Putin has been working toward for some time by pitting Erdogan against the West.

“Keeping Turkey in ‘the West’ is a reasonable goal, but the question is, at what cost to the West? Given the deep changes in Turkish foreign policy over the last two years, it is not clear whether Ankara still regards NATO as the cornerstone of its security, or if it sees the alliance instead as part of a collapsing regional and international order,” Schenkkan wrote in his brief titled “Dealing with the New Turkey: Recommendations for US Policy after the Elections.”

“Is NATO the backbone of Turkey’s strategic posture, or is it a risk to be hedged against? Turkey’s value as a partner to the United States, and the cost-benefit analysis of investing in that partnership, depends on Ankara’s own approach toward the alliance," Schenkkan wrote. He went on, “Washington must continue to communicate to Turkey the consequences of pursuing an apparent strategic realignment through its purchase of the S-400, its imprisonment of American citizens and employees, and its authoritarian consolidation. More specifically, this communication should establish a sliding scale of consequences that will fall into place if Turkey continues down its current path."

He listed two elements to consider: “As approved in a Senate measure in mid-June 2018, [the US should] block Turkey from obtaining F-35 fighter jets if Ankara goes ahead with the purchase of the S-400 air defense system from Russia. Use the sanctions authority under the Countering America’s Adversaries Through Sanctions Act, ... which would place Turkey under harsh secondary sanctions if it chooses to purchase the S-400 from the sanctioned Russian entity that provides the system.”

Almost all indicators point to a looming American arms embargo on Turkey reminiscent of the one in the mid-1970s following the Cyprus dispute. This time, an embargo could be coupled with sanctions that would have a much stronger impact on NATO’s defense strategy in a highly sensitive geopolitical region at a volatile time.

It's ironic that the realistic propositions to set the Turkey-US and Turkey-NATO relations on more realistic ground come from people working for civil society institutions that uphold a value-based approach, instead of that which realpolitik dictates.