Could Hifter's about-face on control of Libya's oil lead to real progress?

Khalifa Hifter’s decision to return control of the oil ports under his authority to the National Oil Corporation, three weeks after seizing them, could be seen as a goodwill gesture that will prompt genuine progress toward an agreement between the two sides. 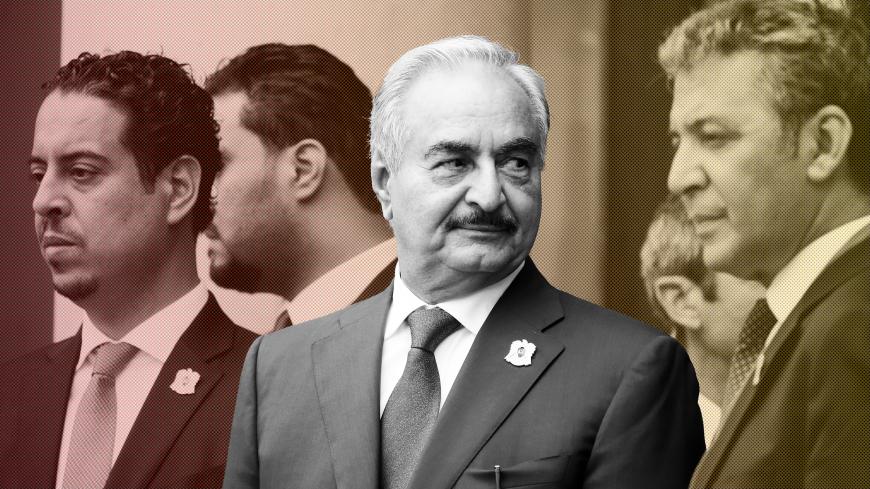 Khalifa Hifter (C), the military commander who dominates eastern Libya, leaves after an international conference on Libya at the Elysee Palace, Paris, May 29, 2018. - REUTERS/Philippe Wojazer

As noted in an earlier Al-Monitor article, the dispute was never really about who should have the right to export Libya’s oil, but rather about the system that distributes oil revenues among various entities and who has the right to preside over the system. Hifter has yet to explain why he relinquished control — and likely never will. He wisely avoided smuggling oil and his reversal could represent his bowing to international pressure. Behind the scenes, it appears that he made the case for the governor of the Central Bank of Libya (CBL) to be replaced, and then as it became clear that this desired outcome was never going to materialize, he backed down to a far more moderate face-saving concession.

In reality, Hifter’s decision to hand over the oil crescent ports to the Eastern NOC was likely initially impulsive, and then two loose goals wound up being grafted onto it. Those goals are 1) to conceal his weakness at briefly losing control of the oil crescent ports to militia leader Ibrahim Jadhran the previous week by showing strength by standing up to the international community; and 2) to secure consistent funding for his Libyan National Army (LNA) — the center of his political and military power — by forcing his political adversaries in western Libya to reshuffle administrative control of the CBL and alter the distribution of oil revenue.

He achieved the first goal quite admirably as his action was initially received quite well by those demographics in eastern Libya to which he is beholden — namely the eastern tribes, the communities near the oil installations and his core supporters around Al-Marj.  To facilitate the second goal, he established five preconditions for reopening the eastern oil ports. As postulated in an earlier article, the most important of these was the replacement of CBL Governor Sadiq al-Kabir by Mohamed al-Shukri, who had been appointed bank governor by the parliament of the eastern government (the House of Representatives) and is thought to be a competent technocrat. Hifter had accused Kabir of political partisanship and funding terrorists. Among the other preconditions were convening a joint local and international investigative commission on oil revenue management and a commitment to the French plan for Dec. 10 elections. On their face, these preconditions are all reasonable goals, especially as they rightly point out that the primary problem in Libya is about moving to a system of guaranteeing equitable and transparent revenue distribution. Nonetheless, effectively blockading Libya’s oil infrastructure was an illegal and financially harmful way to try to achieve them.

Given all this, is Hifter’s volte-face to be lauded? Hifter’s recent decision to return authority of the eastern oil ports back to the National Oil Corporation comes as only one of his preconditions was conceded to: The Government of National Accord and the Tripoli-based CBL, as well as the P3+1 (the United States, UK, France and Italy), have all endorsed his demand for an international audit of Libyan oil revenue and expenditure management. This is certainly a noble step, but a shame that it had to cost Libya over a billion dollars in lost revenue to achieve.

To actualize this compromise, Government of National Accord Prime Minister Fayez al-Serraj requested that the UN Security Council establish an international committee to audit both the Tripoli and Bayda-based accounts and their expenditures to date. This means that Hifter has agreed to an audit of the eastern CBL, which is generally thought to be under his sway and in which he may actually have some skeletons buried in the basement. This is clearly an unmitigated positive. However, it's worth noting that while the Government of National Accord has no authority to participate directly in an audit and although Sadiq al-Kabir has publicly embraced the audit, it is difficult to say how well kept the CBL’s official books are and how accurately they correspond to the way in which money truly flows out of the bank.

In the wake of these momentous events, UN envoy to Libya Ghassan Salame addressed the UN Security Council on July 16. He urged it to further consider Hifter’s underlying requests, warning that if frustrations over "the distribution of wealth and the endemic plundering of resources" were not addressed, then crude production is unlikely to stabilize. This is an acknowledgment that the audit, in and of itself, has not actualized any of Hifter’s initial key demands and that the core demand is in the best interest of all Libyans.

So why the backtrack? The agreement by the Government of National Accord regarding the international audit suggests that behind the scenes there might be a gradual willingness to strike some kind of transparent revenue-sharing agreement. Hifter’s concession could be seen as a reciprocal gesture of goodwill to help it be promptly facilitated. Indeed, time has also been a crucial factor and although there was initially some public enthusiasm for Hifter’s move, support began to quickly diminish after people realized that the negotiation of Hifter’s demands would likely be drawn out and have a prolonged negative impact on fuel and power supplies, as well as on the costs of basic household goods. Furthermore, amid the significant pressure, condemnation and threat of sanctions by the international community, it has also been reported that only the United Arab Emirates (i.e., not Egypt or Russia) had promised to back Hifter’s supposed plan to export crude through the illegitimate Benghazi-National Oil Corporation. Even the UAE backtracked on this promise, effectively forcing Hifter to do the same — if he ever had any concrete intention of pursuing such a risky strategy.

Therefore, Hifter’s decision can be seen as either grudgingly accepting reality or as a major compromise on his part, perhaps even the defiant strongman’s trick of a slight admission of failure, couched as a principled success. In the short term, it will no doubt damage his reputation domestically. He did not deliver his eastern constituents either a greater share of the spoils or regional ascendancy. Internationally, the apparent abandonment of Hifter by the UAE, combined with Egypt's conspicuous silence over the events, indicate these relationships are more fraught than is usually assumed. Additionally, the kerfuffle over the oil crescent demonstrably strained Hifter’s relations with his only major Western patron, France. French officials effectively went against their client by reiterating that he was in breach of Security Council Resolution 2362 by attempting to export oil outside of the Tripoli-based National Oil Corporation’s control. Additionally, the French government played a significant role in the negotiations that made him change his stance regarding the international auditing committee, offering him a face-saving way out the impasse.

This unfortunate episode may have keyed important international actors into the essential fact that distribution of oil revenue is a far more important and intractable problem in Libya than organizing a timeline for elections, and that a resolution of this dilemma necessitates action at the central bank. Since no progress on a political settlement can be made so long as militia smuggling remains profitable due to the black market dinar rate and the extensive subsidies, stasis at the CBL effectively turns Libya into a frozen post-Soviet-style conflict until international actors impose changes on Libya’s macroeconomic arrangements.

On the bright side, international actors are clearly more aware now than ever about what really needs to be done to break the stalemate. Indeed, if there is any glimmering of political will in London, Washington, Rome or Brussels, the most motivated and neutral power could convene the major Libyan players and force open a new space for genuine political negotiations on the distribution of oil revenues. Such negotiations would need to culminate in a new social contract for all Libyans. We should all thank Hifter for illuminating, to a broader audience than ever, that this alone is the way out of Libya’s political gridlock.

Lachlan Wilson contributed to this piece. 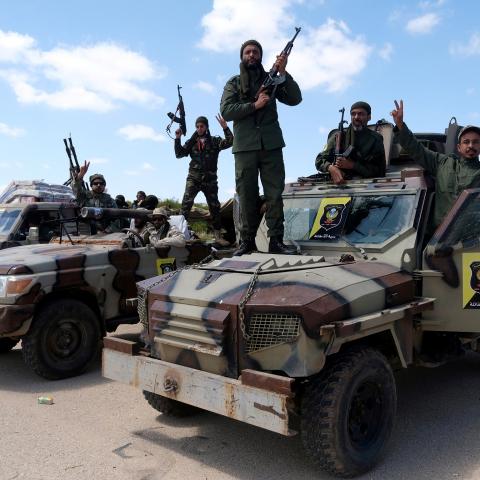