Will Libya devalue its dinar?

In Libya, devaluing the dinar is not about creating jobs, but stabilizing public finances, preserving foreign currency reserves and solving the ongoing liquidity crisis. 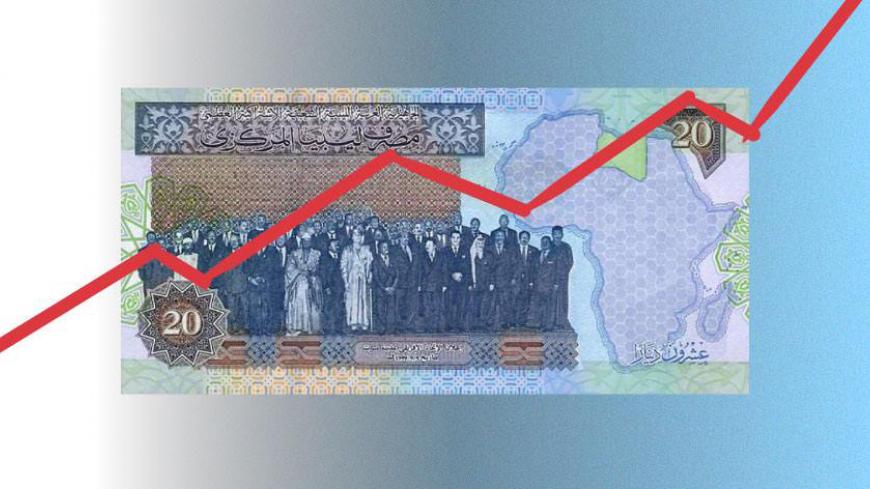 Nearly six years after the fall of Col. Moammar Gadhafi in 2011, the tally of political, social and security-related challenges facing Libya is considerable. International efforts to reconcile the deep political and institutional fragmentation between Libya’s rival political and military factions have stalled in recent months. Pockets of conflict continue to simmer in smuggling hotspots in western Libya, around oil ports and facilities in the oil crescent region, and in eastern Libya as the Libyan National Army forces of Field Marshal Khalifa Hifter continue to pummel jihadi forces in Benghazi and Derna.

Yet against the backdrop of this persistent instability and lawlessness, it is the dire state of the Libyan economy that is keeping many Libyans up at night. Last month, the value of the Libyan dinar fell as low as 9 to the US dollar on the black market, down from 6 dinars, while the ongoing liquidity crisis (over 90% of Libya’s liquidity is estimated to be outside the banking system) means that citizens are unable to withdraw money from their banks and are often not receiving their salaries because their employers simply do not have access to hard cash.

As Libya’s financial institutions attempt to revive an economy burdened by exploding state salaries and subsidy bills, depleted foreign currency reserves and high levels of corruption, Libya’s oil revenues are inconsistent at best and failing at worst due to low production and low oil prices. The country’s oil production currently sits at around 760,000 barrels per day, but frequent blockades, strikes and the ongoing contest between political rivals and their allied militias over the control of the all-important oil exports means production has frequently dropped to as low as 500,000 barrels per day in recent months.

On top of that, institutional fragmentation means that the internationally recognized branch of the Central Bank of Libya (CBL) housed in Tripoli and its rival parallel CBL in eastern Libya are adopting different and often conflicting monetary policies to deal with the crisis. More serious are divisions within the Tripoli faction. A conflict between the Tripoli-based Audit Bureau, which functions as a financial watchdog, and the CBL is hampering attempts to introduce new economic measures. In a rare statement, the Audit Bureau described the CBL as incompetent and complicit in the laundering of foreign currency and smuggling it out of Libya.

Sadiq al-Kabir, the governor of the Tripoli-based CBL, recently pointed out that the Libyan dinar has been under attack. This statement was supported by the Audit Bereau with indication that the plunge of the dinar’s value in the black market is mainly based on speculative rather than real demand. Some financial experts also claim that merchants and importers are deliberately conducting speculatory actions to force the CBL to ease restrictions on letters of credit.

The laws governing the banking sector in Libya authorize the CBL to revise the exchange rate of the dinar against other currencies in response to changes in supply and demand, as well as other economic policy priorities. Although Kabir may be considering devaluing the dinar, he has been reluctant to announce this publicly and appears to have been resisting pressure from the internationally recognized Government of National Accord to do so. In his last press conference on April 23, Kabir said that painful economic decisions are necessary but fell short of outlining any major policy solutions for Libya’s ongoing economic crisis. The AB is also advocating temporary devaluation among other nonfiscal measures to rescue the economy. However, critics of this approach fear that devaluation would achieve nothing, functioning instead as a hidden tax that will create extra social and security costs for Libyan citizens.

In normal economic situations, devaluation is used as a way to increase international competitiveness as overseas demand for a country's goods and services is important in setting the pace of economic growth. When discussing devaluation, creating jobs is often the aim. When the prices of imported goods rise in a local currency, this limits imports, boosting local outputs and the purchase of local goods. Locally produced goods and services are made attractive to foreigners after devaluation sufficiently increases exports. This brings the balance of trade into balance or even into surplus.

However, none of the above applies to Libya. Libya, as an oil exporter and a rentier state, would devalue its currency to stabilize public finances, preserve foreign currency reserves and solve the liquidity crunch by making letters of credit for imports worth much more in the local currency, increasing government revenues and balancing the current account. In Libya, the public sector is inflated with 1.3 million employees (out of a population of 6 million). Therefore, in Libya, devaluation is not exactly about boosting local outputs and solving unemployment.

By allowing the dinar to weaken, the CBL aims to keep the oil revenues and currency reserves stable and hence combat the liquidity crunch of the public sector. Oil is priced in US dollars, but the important fact is that most government expenditures are in dinars (e.g., salaries) and hence the importance of oil revenues and the amount of dinars they produce.

It stands to reason that Libya will have to undergo a devaluation of its currency eventually; the question is when and under what political circumstances. With no breakthrough in the political standoff, daily life under devaluation would be sky-high prices, continued lines outside banks and looting. While devaluation is unpopular in Libya, a political breakthrough would restore hope and help Libyans endure their economic suffering.