The opening of the Lancaster Eden Bay Hotel on the Beirut coast was inaugurated despite allegations that it did not have an occupancy permit from the municipality. 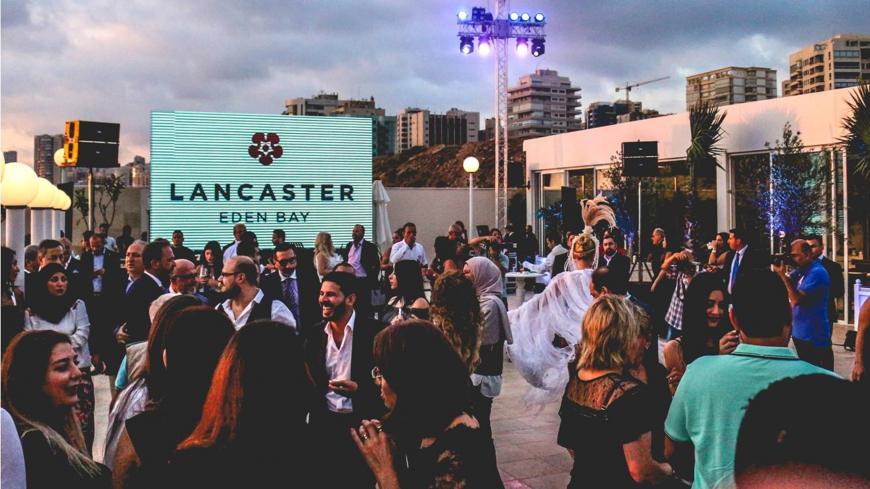 A picture from the glamorous but controversial opening of the Lancaster Eden Bay Hotel, Beirut, Lebanon. Posted June 27, 2018. - Facebook/beirutlifeprestige

BEIRUT — Lancaster Eden Bay Hotel opened June 25 on Ramlet al-Baida seashore in Beirut, despite all the legal conflicts that occurred with the construction of the project. It had an invalid building permit, and the municipality of Beirut did not grant the hotel an occupancy permit. However, project owner Wissam Achour insisted on opening the hotel as a fait accompli.

On May 9, Nahnoo — an NGO founded in 2009 that works to protect public property and cultural heritage in Lebanon — published a report by the municipality’s engineering department on Lancaster Eden Bay Hotel. The report stressed that the occupancy permit could not be obtained until certain conditions were met. The project had eight violations to the building permit it originally obtained from Beirut Gov. Ziad Shebib in September 2016. The construction needed certain adjustments, and all violations needed to be demolished in order to obtain an occupancy permit, according to the report.

Previously, on Aug. 17, 2017, Jad Tabet — head of the Beirut Order of Engineers — published a report pointing out the eight violations the project committed since it was launched.

Questions were raised as to how the hotel opened despite its violations.

Nahnoo’s executive director, Mohammad Ayoub, told Al-Monitor, “Since this project is a hotel, its owner had to obtain approval for the first phase of his project; [this approval] would allow him to rent out rooms, operate a swimming pool and a restaurant. Minister of Tourism Avedis Guidanian grants this approval to investors in Lebanon if their project meets all legal requirements. This two-month approval is renewable until the project is granted an occupancy permit.”

Ayoub added that in this case, “Achour will most definitely renew his approval because he is unable to obtain an occupancy permit [from the Beirut Municipality] since he can only resolve the violations by demolition,” knowing that construction of the hotel has been completed.

On March 29, Minister of Public Works Youssef Fenianos granted a temporary license allowing Eden Bay to erect tents and tables on the beach in front of its hotel, on condition that they are only temporary, until the end of summer 2018. This facilitated the opening of the hotel.

On June 9, a number of citizens staged a sit-in in front of the Beirut municipality building in downtown Beirut to protest the Lancaster project. Meanwhile, Achour Holding’s employees organized a solidarity march in support of the project and of the company providing their livelihoods.

The Lebanese Coast Coalition was formed in May 2017, by groups and individuals from various areas in Lebanon, with the aim to protect the Lebanese coast as a natural and cultural wealth, stopping any violation against it.

This coalition, along with Green Line Association (an NGO dealing with environmental issues in Lebanon), created an event online for June 25 and headed to the opening ceremony on the shore facing the hotel with loudspeakers calling on those present to reject beach theft. Protesters addressed Lancaster owners, saying, “This beach is for all people. No matter how loud your ceremonial music is, our voice will rise above it.”

Most of Lebanon's beaches are being encroached upon by private investments. Only a few public beaches remain. Many NGOs are trying to confront these projects, Lancaster Eden Bay included. It is violating the shores by building a hotel on public property. Its building permit is in violation of the comprehensive plan for land arrangement that prevents construction on Ramlet al-Baida since it is considered a protected area.

A large number of security forces created a security barrier between the protesters and the hotel under the pretext of taking regular security measures, and prevented the protesters from reaching the seashore facing the hotel. Protest organizers told Al-Monitor that a few days earlier, hotel security guards prevented a number of fishermen from getting to the coast.

Ayoub noted, “This project is a disgrace to the stature of the state. It proved that money rules and such actions are supported by ministers and senior officials who grant illegal licenses.”

Lama Karama, a lawyer for the Legal Agenda, an NGO founded in 2009 that aims to keep abreast of legal developments in Lebanon, told Al-Monitor, “The opening is against the law not only because the basic building permit is still being challenged before the State Consultative Council, which is yet to issue its final judgment, but also because of the lack of an occupancy permit.”

She added, “Opening the hotel and allowing it to start welcoming tourists is defying the law. Several judicial decisions to stop the implementation of the license were issued. When a case is closed, the project must be shut down. The municipality of Beirut’s engineering department issued its report, and the hotel opened still. All of these are signs that the project has, from the start, disregarded the law.”

And yet, the hotel started officially operating and renting out rooms for 511,000 Lebanese pounds ($340) a night since its opening.

Although most people who visit Ramlet al-Baida are low-income residents of Beirut who cannot afford to pay for a private resort ticket, Ayoub refuses to use these people as the only argument for his defense. “The beach is a common right for all people. Unfortunately, we live in this city but we sometimes forget it has seashore amid this urban chaos and private investments, let alone the pollution all around the outskirts of the city,” he said.

Meanwhile, the Lebanese Coast Coalition is currently considering its next steps and further moves for the ongoing lawsuit to revoke the permit.

Hashem Adnan, a member of the Beirut Madinati movement, told Al-Montior “the coalition needs to be more organized and we need to attract new members, syndicates, beach lovers and beachgoers. We need to turn this into a popular social force defending the shore from the north to the south. Lancaster is neither the first nor will it be the last project to violate the law. Still, it shows upmost insolence in dealing with the beach while undermining the judiciary and the Lebanese state as a whole.”

Ayoub added, “We will plod away at revoking the approval of the minister of works. We will file additional lawsuits against the company and carry out a series of symbolic movements and peaceful sit-ins in the street, in addition to working more on communication with parliamentary blocs.”

Bahij Abu Mujahid, Achour Holding’s legal agent, told Al-Monitor, “[The hotel] offered a great number of job opportunities in the local market. The tourism sector, which has been suffering for years, was lifted with Achour’s personal initiative to pump money into it. We believe that many Lebanese people happily attended the event to celebrate.”

Abu Mujahid added, “Meanwhile, I do not think media outlets, NGOs and civil authorities have to right to judge whether or not the permits are legal. Only competent departments are authorized to do so. We have obtained the necessary permits from these departments. The security forces and the competent regulatory authorities are currently looking into whether or not we meet the legal requirements.”