Rouhani, Trump in a war of words

A war of words erupted between the Iranian and American presidents, signaling an increase in tensions and unleashing recriminations. 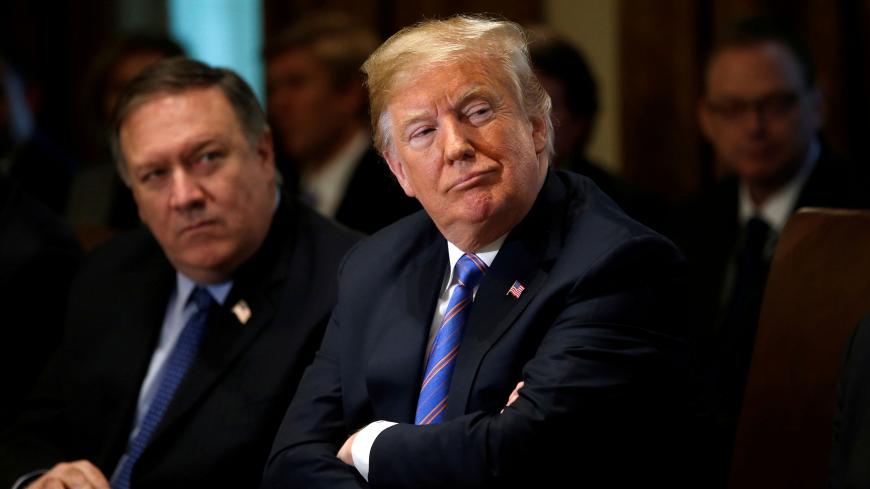 US President Donald Trump, seated next to Secretary of State Mike Pompeo (L), listens during a Cabinet meeting at the White House in Washington, July 18, 2018. - REUTERS/Leah Millis

The Iranian and American presidents have issued threats to one another in a sign of increasing tensions between their countries.

During a speech to Iranian officials July 22, President Hassan Rouhani said the United States is pursuing regime collapse and disintegration against Iran. He added, “America should know that peace with Iran is the mother of peace, and war will be the mother of wars. We will not accept threats, and we have deterrent capabilities.”

Shortly afterward, US President Donald Trump responded to Rouhani’s speech, tweeting in all capital letters, “To the Iranian President: Never ever threaten the United States again or you will suffer consequences the likes of which few throughout history have ever suffered before. We are no longer a country that will stand for your demented words of violence and death. Be cautious!” Interestingly, Trump’s tweet followed shortly after Secretary of State Mike Pompeo addressed a group of Iranian Americans in southern California in a speech advertised as “Supporting Iranian Voices.” The speech was largely uneventful.

Online, many Iranians tweeted with the hashtag #StopMeddlinginIran. Their comments focused on US support for groups that have carried out attacks against Iran, US withdrawal from the nuclear deal and sanctions against Iran. Mohsen Rezaei, secretary of the Expediency Council, tweeted, “Mr. Trump told Mr. Rouhani be cautious. You who have more than 50,000 troops under the Iranian blade, and you make threats like a madman. You must be cautious.”

Bahram Ghassemi, spokesman for Iran’s Foreign Ministry, called Pompeo’s speech “hypocritical and absurd.” Ghassemi added that the event was little more than “propaganda” and that the speech “showed clearly” US meddling in Iran’s domestic affairs, which “violates international commitments.”

The head of the Basij Organization, Gholam Hossein Gheybparvar, called Trump’s tweets “psychological warfare.” He said Trump would “be damned to take action against Iran.” Gheybparvar also said Iran would not compromise on its “revolutionary ideals.” He described Trump as “crazy” and said the United States “will not be satisfied with anything short of Iran’s destruction.”

While the United States and Iran engaged in a war of words, there was other news on the domestic front. The Guardian Council reinstated Sepanta Niknam, a city council member from the city of Yazd. Niknam, a member of the Zoroastrian minority, was suspended after a conservative rival who lost in the council election argued that a non-Muslim should not represent Muslim citizens.

Zoroastrians are recognized in Iran’s constitution, and Niknam had previously sat on the Yazd council without controversy. The Guardian Council voted in favor of permitting religious minorities to serve as city council members. Jews, Christians and Zoroastrians have allotted seats in Iran’s parliament.

In another development, Iranian American art dealer Karan Vafadari and his Iranian wife, Afarin Neyssari, were released from Evin Prison on bail. Both had been imprisoned since July 2016. According to Vafadari’s sister, who announced her brother's release, he and Neyssari had been arrested after the Islamic Revolutionary Guard Corps ordered them to vacate an “ancestral homeland.” Vafadari, charged with “plotting against national security” and being in possession of alcohol and marijuana, was sentenced to 27 years and Neyssari to 16. Approximately a dozen dual nationals are detained in Iran.