Rouhani should make use of the mandate that Iran’s supreme leader has given for further transparency, which will weaken corrupt networks that are harming the country more than any external enemy. 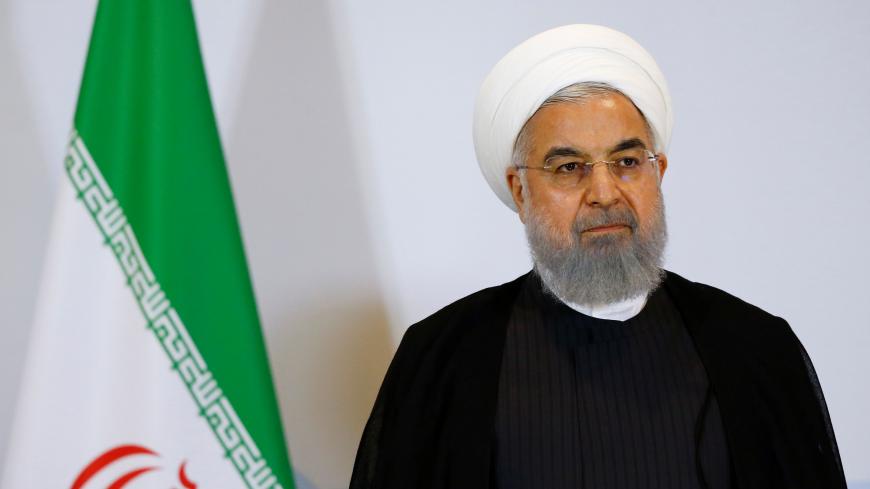 Iran’s recent domestic political developments have surprised many observers and analysts. Historically, the country’s political factions have tended to unite in the face of increased external pressure. However, this time, the reaction to intensified US pressure has been an escalation of domestic tensions, including calls for the impeachment of moderate President Hassan Rouhani.

One can try to understand the level of domestic tension and animosity within the factional paradigm, but the coincidence of these developments with major upheavals on the country’s foreign exchange market — including the devaluation of the rial to an unexpected and unprecedented level — suggests that other factors are at play. In fact, various announcements by Rouhani and his ministers regarding the publication of names of entities who have received hard currency allocations at the official exchange rate points to the political dimensions of the current situation. In other words, there are strong indications that the ongoing economic crisis in Iran is a direct consequence of domestic political shifts that are overlooked due to an overemphasis on external factors such as sanctions. As such, two interrelated domestic processes need to be understood: the pushback by some of the interest groups who feel that Rouhani’s post-nuclear deal reforms are undermining their interests, and the domestic competition over the future orientation of Iran’s international positioning.

The latter process explains why Foreign Minister Mohammad Javad Zarif recently felt it necessary to comment on the domestic tensions by stating that at the current juncture, “domestic cohesion” was more necessary than bread and water. However, it is also clear that those networks that have fueled the recent economic crisis by generating artificial demand for hard currency have little regard for the well-being of the economy and have sacrificed national interests for their own political goals. Thus, it is important to try to identify which interest groups feel most threatened by Rouhani’s reform process and how they put pressure on the administration.

As in other countries, Iran is no stranger to the overlap of business and political interests. For example, the Islamic Coalition Party (Motalefeh) was originally an association of traditional merchants — often referred to as “bazaaris.” Over the past few decades, it has become a political party that has participated in bargaining processes with the government. The Society of Industrial Producers (Jamiayate Tolidgarayan) is another example of a business interest group that has become a political entity.

In most cases, the political presence of business interests is not as visible as the abovementioned two entities, and it is valid to argue that the developments of the past two decades, and especially the imposition of external sanctions and spiraling internal corruption, have empowered a mafia-style interdependency between politics and business, as was explained in a recent Al-Monitor article. Furthermore, a number of semi-state entities belonging to military, religious and revolutionary foundations represent a different layer of overlap between political and business interests. While these groups have their clear interests, they need to operate in an economy in which the government remains a key player due to its monopoly on oil and gas revenues and its role as the main provider of hard currency. It is clear that in such an environment, the real private sector is overshadowed, and each of the mentioned interest groups — as well as the government — have carved out their own spheres to benefit from the country’s vast economic potential.

Such a mode of operation is only possible as long as interests are distributed based on an opaque and informal political culture. That culture has thrived over the decades of external pressure and sanctions, and in many incidences, secrecy and opaqueness were even presented as legitimate and necessary instruments to beat and circumvent sanctions. At the same time, anyone who worked to increase transparency and accountability was sidelined through arrests and harassments. Consequently, major embezzlement cases were facilitated and even tolerated as part and parcel of a culture of opacity.

However, the Rouhani administration’s decision to enter negotiations with world powers to lift the nuclear-related sanctions and work toward transparency and accountability clashed with the mentioned approach. This reform process started with greater transparency about government expenditures and allocation to different organizations. Furthermore, government organizations were compelled to make as much information as possible available for public access. In parallel, the administration engaged in a number of reforms that were necessary to reconnect the country’s banking sector to the global financial system. It is not a coincidence that massive efforts have been made to reject the laws and regulations that the Iranian government has introduced within its action plan related to the Financial Action Task Force. It is this type of transparency that the corrupt networks fear. If such illegal and unjustified interests are exposed, many seemingly pious businesspeople, officials, Islamic Revolutionary Guard Corps commanders and others will lose their standing within Iranian society. Here, it is important to underline that such corrupt interests are not confined to one particular faction or specific groups. Rather, all political orientations are represented within the opaque circles.

Within this context, Rouhani’s recent instruction to all ministries to publish the names of individuals and entities that have received hard currency at the official exchange rate could be seen as a tool to further escalate the contest with pressure groups — and it is no secret that those networks have pushed back against the government. One recent example includes a statement by Asadollah Badamchian, a senior member of the Islamic Coalition Party, in which he called on Rouhani to apologize to the people, resign and hold new elections — opining that a conservative president would manage the country more efficiently. The close affiliation of the Islamic Coalition Party with traditional merchants may also explain the motivation for the recent spate of protests in the Tehran Grand Bazaar.

In the meantime, the Rouhani administration has continued to push for more transparency to expose shady interests. The most visible of such moves was the recent publication of the names of entities that had received foreign exchange at the official exchange rate to import mobile phones and the establishment of a committee to document the abuse of hard currency allocations by the Ministry of Information and Communication Technology. In addition, the Central Bank of Iran has published a long list of entities that have received hard currency at the official exchange rate. In one major corruption case that became public, officials at the Ministry of Industry, Mining and Trade have stated that the importation process of about 4,500 cars that had been imported illegally had been stopped.

Incidentally, Supreme Leader Ayatollah Ali Khamenei reacted to the heightened political tensions in a speech on June 27. In his own way, he also asked for greater transparency and for support for the administration.

As such, though the corrupt networks have plenty of pressure instruments at their disposal, Rouhani should make use of the mandate that Khamenei presented in his speech to push for further transparency and weaken those networks that are harming the country more than any external enemy. In this process, some of the politicians and groups close to Rouhani will also go down as corrupt. But if the process produces a greater degree of accountability and transparency, it will be worthwhile — even though in the short term it will be a painful process with a lot of uncertainties.