Film about Egyptian superstar a hit everywhere but Egypt

In Europe, Iranian director Shirin Neshat’s "Looking for Oum Kulthum" is seen as a landmark artistic collaboration across the Middle East, but Egyptian critics are unimpressed with its historical inaccuracies. 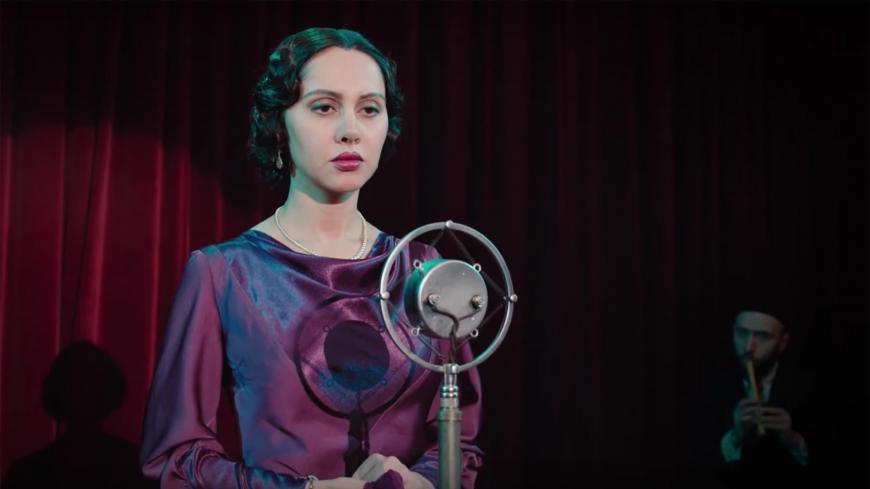 CAIRO — Iranian director Shirin Neshat’s “Looking for Oum Kulthum," a movie that looks at the past and present of women's lives in the Middle East, has received a warm welcome from international and regional critics ever since its debut — but not in Egypt.

The film was shown to European audiences in Germany and Austria earlier this month, but the Beirut-based MC Distributors, which holds the screening rights in Egypt, told Al-Monitor that they are uncertain whether the movie will ever find its way to Egyptian theaters. The company is concerned that the film, which has been fiercely attacked by some Egyptian critics for inaccuracies and other faults, would flop in the motherland of the Egyptian singer.

The movie is a rare moment of harmony and artistic collaboration across the Middle East: Iranians handled writing and direction, Egyptians took on most of the acting and production was shared between Germany, Austria, Italy and France, in partnership with Qatar.

Co-directed by Shirin Neshat and Shoja Azari, the film revolves around an Iranian director who wants to make a movie about the legendary Egyptian singer Oum Kulthum and desperately searches for the right actress. The two lead roles are played by Iranian actress Neda Rahmanian as director Mitra and Yasmin Raeis as Ghada, an actress vying for the plum role of Oum Kulthum.

Through the interactions of Mitra and Ghada, viewers are invited to observe the current situation of women in the Middle East with all their various social, religious and practical constraints and to compare it with the situation of women during Oum Kulthum’s era and the challenges the ambitious singer faced until she made it locally and internationally.

International distributor Match Factory told Al-Monitor that the distribution rights in Egypt were granted to MC Distribution, which manages many foreign films in the Arab world.

A source at MC Distribution told Al-Monitor on condition of anonymity that the company is still considering the feasibility of releasing the movie in Egypt, as many theaters would be reluctant to take a risk on a potential box office flop. The source said it seems more likely that the film will be screened for a short period in selected movie theaters such as Zamalek Cinema, where it was screened for the Cairo Cinema Days Festival last April.

"The film did not reach a wide audience then, as the festival itself was a new one and the audience was more interested in popular American films shown," said Zamalek Cinema manager Sayed Ali. "It also faced heavy criticism from the Egyptian critics."

Amir al-Amri, the film critic behind the Eye on Cinema blog, watched the film at the Venice Film Festival. He told Al-Monitor, “'Looking for Oum Kulthum' attempts to depict how Oum Kulthum was able to make her way into every home — urban and rural, liberals in Cairo and conservatives in … Upper Egypt — and maintained her diva status for over 50 years, despite the circumstances of her conservative society that marginalized women and did not recognize their rights."

He went on, “We see the star and the director's struggles and we wonder why they are struggling in today's society, which seems to be more open. But the way the film is presented hardly provides an answer to that question.”

Amri noted that the film failed to address differences between the past and the present and often lacked coherence and clarity. “Some characters appeared out of nowhere and disappeared without a reason or an explanation,” he said, suggesting that a better selection of anecdotes from the life of Oum Kulthum could have shown that the society back then was very open in certain ways in contrast to what he called the “seeming openness” of Egypt's current society.

Just like Amri, who pointed out that Oum Kulthum never choked while singing before late President Gamal Abdel Nasser, many critics in Egypt are bothered by the historical errors and other inaccuracies in the movie.

Sharif Saleh, a film critic for the London-based Al-Hayat, told Al-Monitor that the film was full of historical errors about Oum Kulthum’s life and in its portrayal of Egyptian society. He cited the clothes of Egyptian villagers and the tarboush worn by an audience member at a concert in the 1960s. “Egyptians had stopped wearing the tarboush a decade ago,” he said, adding that Oum Kulthum never wore short-sleeve dresses.

For Hiba Mohammed Ali, a film critic for Al-Maqal newspaper, the film lacked a true understanding of Egypt because the director, the production team and the actors playing Egyptians were mainly Iranian, Moroccan and French. Oum Kulthum's characters at childhood and old age were played by non-Egyptian actresses.

Ahmed Amer, a producer of the film and co-author of the Arabic dialogue, defended the film, saying that it is not a documentary about Oum Kulthum. “There is a reason many film festivals extended an invitation to ‘Looking for Oum Kulthum,’” he told Al-Monitor. “The film does not claim to be accurate in portraying the life of Oum Kulthum in detail; it aims to tell the story of an Iranian director and an Egyptian star trying to make a movie about Oum Kulthum outside of Egypt. … At the end of the day, it is a film about the two lead actresses’ visions of Oum Kulthum, not a biography of Oum Kulthum.”

Amer said that he respected the views of the critics, but added, “The film answers all their questions by flagging the differences between the life of Oum Kulthum and the lives of Ghada and Mitra. Only a small number of Egyptian film critics were able to see the film, so it would be unfair to judge the film based on a few views.”

At the same time, Amer admitted, the movie is more for an elite audience interested in women’s causes than the general audience. His recent satirical film, "Kiss Me Not," is popular with cinema insiders but found no success at the box office.