An exhibition in Cairo casts a nostalgic look at Umm Kulthum, the great Egyptian diva, and her fans who loved the aesthetic life of the '50s and '60s in Egypt. 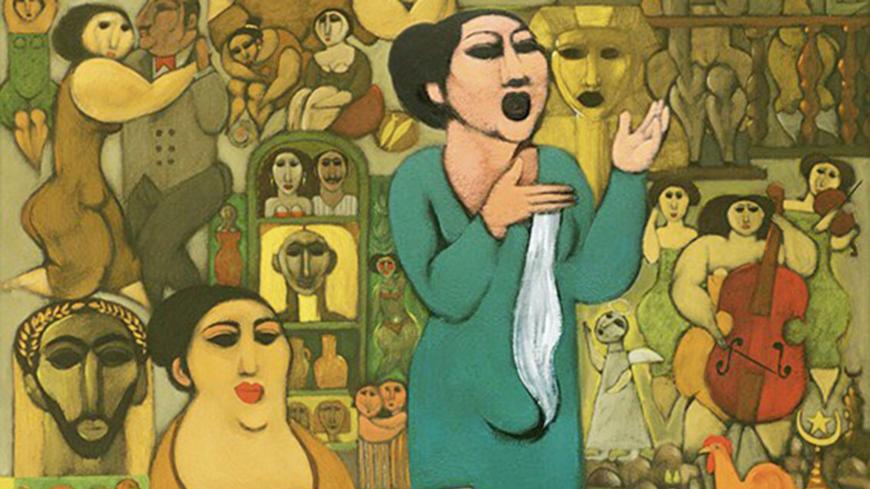 For Egyptian artist Mostafa Rahma, legendary Egyptian singer Umm Kulthum is the symbol of an elegant Egypt that is long gone, except in his paintings.

“I lament that period that will never come back again,” he told Al-Monitor at his exhibition, “Fans of Umm Kulthum,” in Cairo’s Picasso Art Gallery. “My paintings focus on Egypt in the 1950s and 1960s — the period when you could rarely find women wearing the hijab or niqab, or men sporting beards,” Rahma said, expressing his nostalgia for a time when life was “simple, aesthetic and free of stress.”

He said that Egyptians then enjoyed life to the fullest, attending concerts, watching films, going for picnics and visiting cafes, and laughing, joking and chatting freely with friends.

Rahma, 66, admitted that he feels lonely and isolated in his yearning for the past. “I am still living in that period. I am still watching black-and-white films and Umm Kulthum concerts that allow me to breathe and continue my life.”

For Rahma, the symbol of the period is Umm Kulthum, the singer who dazzled the whole region with her voice. Known as “the Star of the East” and “the Fourth Pyramid,” she acquired international fame with her songs, whose lyrics were penned by famous poets and songwriters such as Ahmad Rami, Bayram al-Tunisi and Zakariyya Ahmed. Composers such as Mohammed Abdel Wahab and Riad al-Sunbati also played a significant role in her success.

Umm Kulthum’s songs united rich and poor, as well as different ideologies. Her concerts on the first Thursday of every month at different venues throughout the '50s and '60s were packed. Those who could not obtain a ticket for the live performances would listen to the concerts, often broadcast live, on the radio. She performed internationally, for instance, at the Olympia in Paris in 1967.

She was also a symbol of Egyptian patriotism. One of her songs associated with President Gamal Abdel Nasser — "Walla Zaman, Ya Selahy" ("It's Been a Long Time, Oh My Weapon") — was adopted as the Egyptian national anthem from 1960 to 1979. Umm Kulthum performed regularly for the military.

When she died in 1975, at the age of 76, hundreds of thousands of mourners attended her funeral. In 2001, the Egyptian government opened the Kawkab al-Sharq Museum, which means “the Star of the East” in Arabic, in her memory. In 2012, Jerusalem Mayor Nir Barkat inaugurated Umm Kulthum Street in East Jerusalem. Last year, Iranian artist and director Shirin Neshat paid homage to the Egyptian diva in her new film “Looking for Oum Kulthum,” which had its world premiere on the fringes of the 74th Venice International Film Festival.

In Rahma’s exhibition, about 40 acrylic paintings depict the fans of Umm Kulthum and the lost elegance of a generation that wore chic clothes even while at home. One of the paintings shows a woman in her home, staring from a window while holding a radio in her hand. Her features reflect her enjoying the songs of Umm Kulthum. Another work shows a man sitting at a table with a radio. The man seems to be in deep reflection of an Umm Kulthum song, while the shadow of a woman is seen behind him — possibly the memory of a lost love.

Other photos show the quiet, uncrowded life of the era through the empty streets. One of the displayed works shows a couple sitting inside a carriage, which is moving fast. Another one shows a licorice seller on a clean and empty Cairo street.

Many scenes portray women and men playing instruments such as the oud, to show how people then were keen to play music.

“I like it so much,” Zeinab Abdel Hamid, 60, said while looking intently at a painting that displays a woman playing the piano. “It reminds me of my wedding preparations when my late father insisted that my husband should buy a piano for me. I still have it and my grandchildren play it.”

Rahma is an Egyptian painter, comic artist and cartoonist based in Cairo. He also illustrates children's books and writes for several magazines. Most of his works reflect his nostalgia of the lifestyle of the past. His solo exhibition in 2013, titled "Classy Women of the Past,” portrayed mostly full-figured women in body-skimming clothes showing feminine confidence.

“Fans of Umm Kulthum” runs until April 16 at the Picasso Art Gallery in Zamalek, Cairo.