After an unsanctioned weapons cache exploded recently in Sadr City, Muqtada al-Sadr is proposing an initiative to hand over to the state the weapons of Iraqi factions — beginning with his own movement. 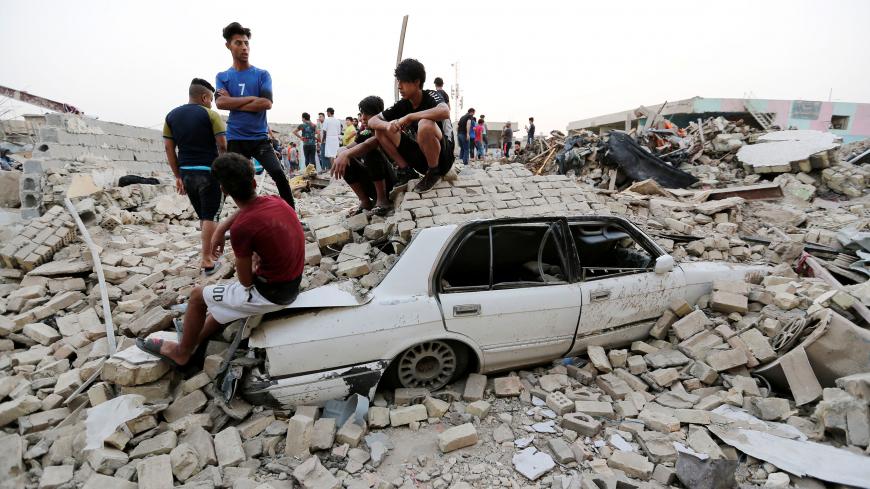 Since a deadly explosion rocked Baghdad’s Sadr City area June 6, there's been a lot of talk about getting armed factions to turn over their weapons to the Iraqi government, but it remains to be seen how successful such a campaign would be.

The blast, which occurred when illegally stored weapons and ammunition detonated, killed at least 18 people and wounded more than 100. Iraqi Prime Minister Haider al-Abadi called for an urgent investigation into the explosion.

Muqtada al-Sadr, a nationalist Shiite cleric and head of the Sadrist movement — whose family is Sadr City's namesake — addressed the incident June 8. He stressed that he had given orders to search for the “fugitive” responsible, though some of his opponents alleged the weapons, which had been stored in a mosque, were owned by Sadr's own Peace Companies militia.

Sadr also called for the government to launch a national disarmament campaign, and he volunteered his militia to be the first to turn over its weapons.

Shortly after that, on June 12, Sadr’s Sairoon Alliance made a surprise announcement that it was forming an alliance with the pro-Iran Fatah Alliance. No single party won enough votes in the May 12 elections for the majority necessary to form the new government. Combining the groups' votes has expedited that goal, Sadr said in a joint press conference with Fatah bloc leader Hadi Al-Amiri. Sadr had been warning that civil war in Iraq was imminent unless a new government could be formed quickly.

These developments indicate that Sadr is trying to exploit the blast to gain points politically and with the public. He was swift to forge the biggest alliance to be able to create the next government. He was also keen to closely follow up on the explosion's repercussions in his movement’s areas of influence, to maintain popularity among his followers.

The day after the blast, Sadr said he would seek to hand over those accused of storing weapons to the security authorities, and he called on the government to disarm all armed factions, including the Peace Companies — the Sadrist movement’s military wing — and seize weapons that are not in the hands of the state to “demilitarize” Sadr City.

“Everyone should obey orders, not obstruct the project and hand in their weapons without any discussion, because the blood of Iraqis is more precious than anything else,” he said.

A source in the Sadrist movement who refused to be named told Al-Monitor the movement's members had been ordered not to talk about the disarmament initiative while negotiations were underway to form the largest parliamentary bloc.

The Iraqi Interior Ministry praised the Sadr initiative to disarm in a June 8 statement.

Sadr's call for disarming military factions isn't new, and he also called earlier this year for dismantling the Popular Mobilization Units (PMU), which includes other Shiite armed factions. Previously, however, Sadr hadn't offered to go first by disarming his own movement, probably for fear of taking this step solo and weakening his movement's political position.

Mohammed al-Rubaie, a member of Asaib Ahl al-Haq's political bureau, told Al-Monitor that Sadr’s initiative "was very welcomed, as it is a step forward to end the phenomenon of illegal arms.”

“The Political Parties Law prohibits any political party from owning an armed faction. There is also the PMU law [of 2016] that integrated all [the PMU's] armed factions within the Iraqi army. The disarmament laws already exist; they need implementation,” he added. “The current government is weak and unable to seize all weapons from the different cities.”

The Political Parties Law, which was approved in 2015, was designed to ban every armed party from participating in politics. But the law remains shelved, and the Independent Electoral Commission has yet to reject any political party because it has weapons.

It's unlikely that the current government, which has been putting off implementing the laws, will take action to seize illegal weapons and limit them to the hands of security forces. This government is almost a caretaker government.

The most important question for the next four years, however, is how to deal with illegal weapons outside the scope of the state, especially since the political slates that won the most votes in the May 12 elections are made up of the leaders of armed factions — the Sairoon Alliance and Fatah bloc — the two groups that are forging an alliance in an attempt to create the next government. Will these factions actually hand over the PMU weapons, implementing Sadr’s initiative, or will they protect their weapons in parliament and the government?