Rank-and-file members of the Iraqi Communist Party feel betrayed by Muqtada al-Sadr's Sairoon Alliance allying with the pro-Iranian Fatah Alliance to potentially form an overwhelmingly Shiite government instead of trying to dispense with sectarian politics. 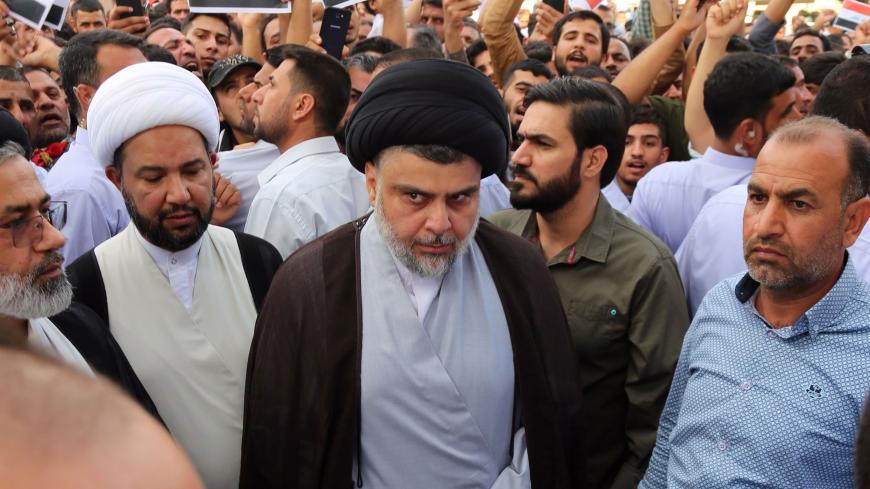 The alliance formed between the Sairoon Alliance, led by Muqtada al-Sadr, and the Fatah Alliance, led by Hadi al-Amiri, to potentially form a new Iraqi government sent shock waves through the country's civil movements, which had been relying on Sadr to break with the sectarian quotas and alliances that have dominated Iraqi politics for the past 13 years. The Iraqi Communist Party (ICP), headed by Raed Fahmi, described the alliance between Sadr and Amiri as “cross-sectarian,” but almost 97% of their blocs is Shiite. This has prompted prominent civil society activists to criticize the ICP for its position.

The ICP — which protested with Sadrists in Baghdad and other cities against corruption and sectarianism beginning in 2015 — had allied with Sadr in the May parliamentary elections on the Sairoon list. The ICP leadership considered the alliance with Sadr as a way for the country to a move beyond the sectarian nature of its recent politics, and the party secured two of the 54 seats won by the list. It is the first time that the ICP has made it into parliament with multiple seats. It won a single seat in the 2005 elections, and then failed to win seats in the 2010 and 2014 polls.

The ICP, which has long criticized Iranian policies and the blocs affiliated with Fatah, said in a surprising official statement, however, “The Fatah-Sairoon alliance contributes to protecting the country from being exposed to serious, dangerous risks, which different forces with various motives are trying to inflict [on Iraq].” The statement stressed that the party is “holding onto” the Sadr-Amiri alliance, which has led some ICP members to openly criticize their party.

ICP leader Jihad Jalil, who had been an active participant in the anti-corruption protests since 2011, posted on Facebook, “The statement issued by ICP’s political bureau on supporting Sairoon’s alliance with the Popular Mobilization Units (PMU) does not represent me. The political bureau, known for its mismanagement of alliances, is clearly in the wrong here.” The Fatah Alliance includes armed Shiite factions from the PMUs close to Iran or even loyal to it. It won 47 seats in May.

Jalil told Al-Monitor, “Given the project Sairoon and the protest movement had agreed on, the Sairoon-Fatah alliance is way off course. This alliance has a significant number of members in parliament, all of whom share similar principles, so the small number of ICP representatives might not have a say at the end of the day.”

The ICP leadership, which had criticized party-affiliated armed groups and sectarian-based consensus for years, thus finds itself in a delicate situation, in particular because it has not announced any anticipation of withdrawing from the coalition or taken an opposing stance.

Ali al-Sumery, a prominent figure from the 2015 protests in Baghdad who left the protest movement in 2015 after Sadrists joined it and some civil society figures openly identified as Sadrists, told Al-Monitor, “The smallest civil forces within Sairoon do not have a say in the coalition’s decision-making process. Sadr is the one calling all the shots.” Sumery added, “Sadr’s outlook is the only one that matters. Others follow.”

ICP sources have informed Al-Monitor that the political bureau supporting the Sadr-Amiri alliance has led some members to resign. “Most of those who submitted their resignations are from the younger generation,” the source said. “This is a normal reaction to a position they did not accept.”

The ICP, which appears to have managed to steer clear of corruption and violence, now finds itself at a crossroads. It can either withdraw from the Sairoon coalition, keeping the Shiite blocs with close ties to Iran at arm’s length, or remain in the coalition to ensure access to a ministry in the next government.

In the end, ICP's representatives in the next parliament, Fahmi and Haifa al-Amin, will not have much influence while under the thumb of Sairoon and Fatah, which share political and sectarian principles out of sync with those of the ICP.