Calls and protests to lift sanctions on the Gaza Strip have spread outside the Palestinian territories and are expected to grow even bigger. 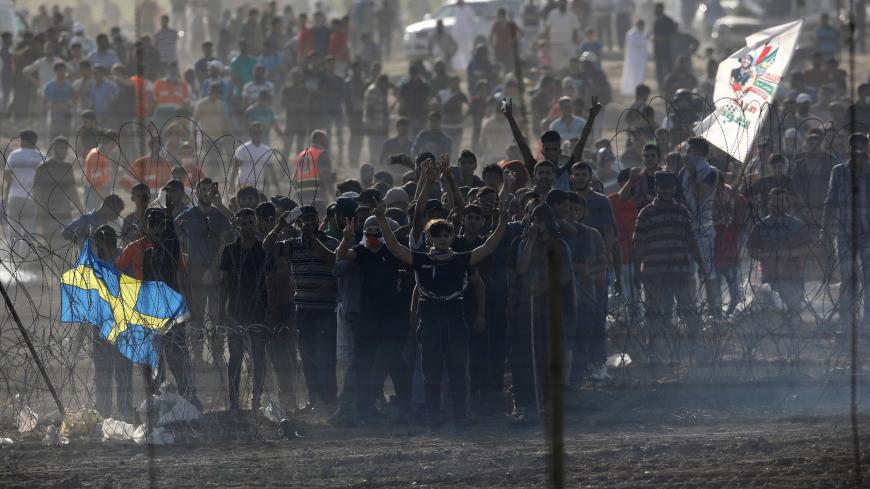 Palestinians protest on the Gaza side of the border with Israel, June 8, 2018. - REUTERS/Amir Cohen

Organizers of the "Lift the Sanctions" campaign in the Gaza Strip say the movement is gaining international momentum.

It has been 11 years since Israel imposed its blockade on Gaza and one year since the Palestinian Authority (PA) imposed sanctions on the strip. At the end of May, a mass campaign took off in the Palestinian territories asking the PA to eliminate its punitive measures on the Gaza Strip that affect salaries, operational expenses, medical transfers, early retirement decisions, power cuts and allowances for the families of Palestinians killed or detained in Israel.

Since early June, dozens of activists, writers, artists, journalists and citizens have been staging peaceful protests in the West Bank to demand that the sanctions be lifted. On June 10 and 13, people protested in front of Al-Manara Square in Ramallah in the West Bank. Also on June 13, protesters staged solidarity strikes in Abu Dis village in Jerusalem and Martyrs’ Square in Nablus. Palestinian security forces clamped down on the protests and arrested several demonstrators.

Hekmat Zeid, Palestinian President Mahmoud Abbas’ adviser for provincial affairs, announced June 13 that the PA was banning protests in the West Bank, claiming the protests “disrupt the movement of citizens and disturb them.” Yet protesters demonstrated June 20 in Bethlehem in the West Bank.

Also on June 20, the campaign organized protests in front of Palestinian embassies and diplomatic missions in Arab and Western capitals, mainly in Amman, Jordan, in Beirut, Lebanon and in in New York. On June 21, a similar demonstration was arranged in Athens, Greece. The campaign organized protests June 23-24 in European cities to show solidarity with Gaza in Montpellier, France, in Milan, Italy, in Amsterdam and at the European Parliament building in Brussels.

Campaign participant Rita Abu Ghosh told Al-Monitor, “We are trying to pressure the PA to lift the sanctions on Gaza. Our events are gaining momentum geographically, thanks to our contact with Palestinian diaspora around the world. Although we represent a wide spectrum of Palestinians, we are not seeking partisan representation. Our course of action consists of making decisions democratically. The campaign will remain without a leadership and political frame. It ends when the sanctions on Gaza are lifted. We have neither financial support nor a political agenda, contrary to the PA’s accusations. We are volunteers. We created a Facebook page and highlighted the PA’s oppression due to its fear of the protests and its attempts to silence us.”

Organizers launched a series of tweets on social media in which hundreds of Twitter users and activists participated under the hashtag Lift the Sanctions on Gaza. The slogan “One people, one concern, one enemy” was also trending.

Geneva resident Ramy Abdu, the founder and former president of the Euro-Mediterranean Human Rights Monitor, told Al-Monitor by phone, “The public movement is gaining momentum because it is humanitarian rather than political. Palestinians abroad are increasingly engaging with the protests through events in Arab and European states and in front of Palestinian embassies. Perhaps protests are increasing due to the PA’s behavior in clamping down on them, as many activists have connections abroad. The movement is showing donor countries that the money they are giving the PA is being used to violate human rights.”

The UN's Office of the High Commissioner for Human Rights (OHCHR) said June 15 on its Facebook page that it is “deeply concerned at the banning of demonstrations and the possible excessive force used against peaceful demonstrators by Palestinian security forces [June 13] in Ramallah City.” The post added, “OHCHR monitored the demonstrations and recorded large groups of uniformed Palestinian security forces, plainclothes officers and others working in a coordinated manner. The peaceful demonstrators were dispersed with flash grenades, pepper spray and tear gas. OHCHR witnessed brutal arrests and beatings of protestors. … Some 56 people were arrested and then released at dawn on [June 14]. … Journalists and activists were threatened and forbidden from documenting the demonstrations by police.”

A Palestinian official close to Abbas expressed a different point of view about the demonstrations. He told Al-Monitor on condition of anonymity, “The Lift the Sanctions campaign coincides with Israeli and US pressure on the PA, which means that it contributes to security instability in the Palestinian territories, even if it is happening under the pretext of [highlighting] the tough humanitarian situation in Gaza. The aim of the campaign is to twist the truth.”

According to some Palestinian media outlets, Fatah is accusing the campaign of implementing a "systematic" effort designed by Israel to spark strife among Palestinians.

The general impression about campaign organizers is that they are leftist activists and independent journalists. Hamas’ presence among them is weak, for several possible reasons: Hamas fears the PA’s pursuit, it lacks a strong organizational structure in the West Bank and/or the campaign is trying to keep its distance from politics. Political motivation would give the PA an excuse to attack the campaign and deprive it of the needed international exposure.

Campaign participant Iyad Refai told Al-Monitor, “The fact that protests are spreading outside the Palestinian territories, especially in Europe, doesn't imply that we are banking on the European stance — Europe has not uttered a word about the blockade on Gaza for years. The European Union support for Palestinian police and security serves the interest of oppressing peaceful protesters who are demanding an end to the sanctions. Although the PA is trying to demonize the campaign and accuse it of [receiving] foreign funding and destabilizing the situation in the territories, these actions are purely [grass roots] and have no foreign affiliations.”

It has been only a few weeks since the anti-sanctions campaign began, and it has already created a buzz inside and outside the Palestinian territories. More public and official mobilization against the PA’s measures is expected. At the same time, this campaign could provoke an internal Palestinian confrontation among the PA, young activists and influential civil society groups, rather than a row with Hamas.