The best remedy for Iran to solve its economic crisis is greater transparency and a focus on technocratic remedies. 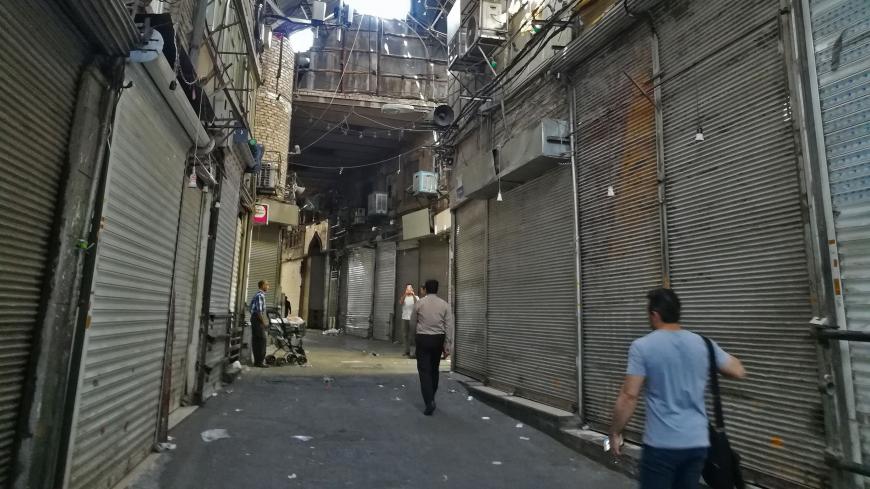 Turbulent developments in the past few months on the foreign exchange and gold markets in Iran and the government’s failure to manage runaway prices has compelled some economists to start using the term “bubble economy.”

The interrelationship among various markets within the country’s economy was explained in a June 14 Al-Monitor piece. In this article, however, we will focus on the root causes and complexities of behaviors by economic players. Regardless of whether these acts are driven by economic, psychological or political factors, they are damaging to the economy as a whole and compound the government's challenges in managing the economy. At the same time, it is clear that a continuation of the current conditions will increase the likelihood of an economic crisis with unprecedented social and political consequences. The current wave of strikes and demonstrations by traders and other economic actors is an example of how the problem will be amplified if the authorities do not develop proper responses.

It is not a secret that in the past few decades the country’s economy has continuously been undermined by internal factors such as mismanagement and corruption and external uncertainties such as sanctions, threat of war and regional insecurity. However, the intensity of the recent events supersedes the collapse of the Iranian rial in 2012, when a similar confluence of internal and external challenges was faced under the Mahmoud Ahmadinejad administration, including the threat of war over the collapse of the then nuclear negotiations. In trying to explain the price hikes, Iranian officials have also referred to “bubbles” extensively and have stated that the price developments could not be explained by economic fundamentals.

An economic bubble is usually generated if there is optimism about the future value of a specific commodity such as property, gold, oil, etc. However, in the case of Iran, the driving force for various bubbles in the economy is a confluence of different factors, including an anticipation of inflation, unsustainable financing practices and misguided government policies. The best description of the current situation is that the economy is in a state of limbo. Some may even argue that the whole country is in a state of limbo more than it was in 2012. This is very damaging and confuses the society at large, in particular economic players. The recent actions of the Central Bank of Iran (CBI) are a good indication why key stakeholders distrust the CBI and other relevant authorities. In response to the rial devaluation on the open market in March and April, the CBI announced the unification of exchange rates, clamped down on foreign exchange bureaus, but then failed to provide the needed hard currency to satisfy the market. In the meantime, a three-tiered exchange rate system is emerging — an embarrassing outcome, considering the process started as a path to unify the previous two-tiered system.

While economic analysis always focuses on visible markets, such as hard currency, gold or the stock exchange, the key shortcoming in the Iranian economy is the nonexistence of a proper capital market. This forces economic players to use financing approaches that are harmful to the economy as a whole. For example, property developers pre-sell their housing units and build in an anticipated inflation into their pre-sale price. The same approach happens in the automotive market with liquidity being absorbed by companies from nonbanking sources. Furthermore, an established method of financing internal trade is delayed payments by bank checks — sometimes postdated by 10-12 months — here again with a built-in inflation. These financing gaps are then hedged against through speculation in the hard-currency and gold markets. In the meantime, banking liquidity is being invested in other markets, pushing up prices. In other words, there is a chain of ill-structured interdependency among economic players that can collapse if the economy experiences high levels of volatility.

Economic expert Albert Baghzian believes that the key responsibility of the current distortions in the market lies with the CBI. He says that as long as Iranian society feels as it is in a crisis mode, there will be a push toward parallel markets.

In the meantime, the government is also incapable of managing the uncertainties and volatilities. Instead of taking responsibility and being a regulator to calm key actors, the government blames other authorities and corrupt networks, while being accused of protecting its own proteges. Other institutions, such as the judiciary and the intelligence apparatus, also do not employ initiatives to calm the situation, but rather engage in factional and institutional blame games. A recent high-profile case of smuggling of 5,000 expensive cars into the country serves as an example to see how different players act and how corrupt practices have made governance structures dysfunctional. In this case, the state prosecutor has admitted the existence of corrupt networks and has announced that the responsible persons will be prosecuted. However, a long host of similar past promises and lack of action on behalf of the authorities has eroded even the minimal level of confidence in the state structures.

Though one can identify many reasons for the current economic ills in the country, it is valid to argue that political instability and the consequent short-termism in economic decision-making are key problems. The push for quick gains and short-term economic cycles creates bubbles in the various markets and does not allow for medium- to long-term economic stability. It is a vicious cycle that none of the governments has managed to address effectively. Some experts put the blame on the government, but the roots are deeper and probably in the prevalent win-lose mentality in Iranian culture that leads to tensions in the political as well as economic spheres.

Clearly, the best remedy against such economic crises is greater transparency and a focus on technocratic remedies. This would mean that the government and CBI should start exposing the elements and networks that benefit from artificial price developments and corrupt practices. For example, the Ministry of Information and Communications Technology on June 24 announced the names of those entities that imported mobile phones at the official exchange rate, assuming that most of them sold their items at the unofficial free market rate. It is this type of windfall that has financed a number of corrupt networks in Iran.

Furthermore, the regime as a whole has to stop its passivity and go after the corrupt interests. Recently, prominent financial auditor Abbas Hoshi correctly opined that the only way to fix the country’s economic crisis is to fight the underground economy, which is out of government control, and to let the CBI become truly independent.

There is also increasing pressure on President Hassan Rouhani to reshuffle his economic team. However, past experiences have shown that such shifts won’t address the core issue. If an economic collapse is to be prevented, the government has to stop playing the role of the victim and start regulating various markets based on a clear economic doctrine along the provisions in the various state strategy documents, including Vision 2025 and the sixth five-year development plan.