Congress called out the Donald Trump administration for failing to provide lawmakers with a US strategy for the conflict in Syria. 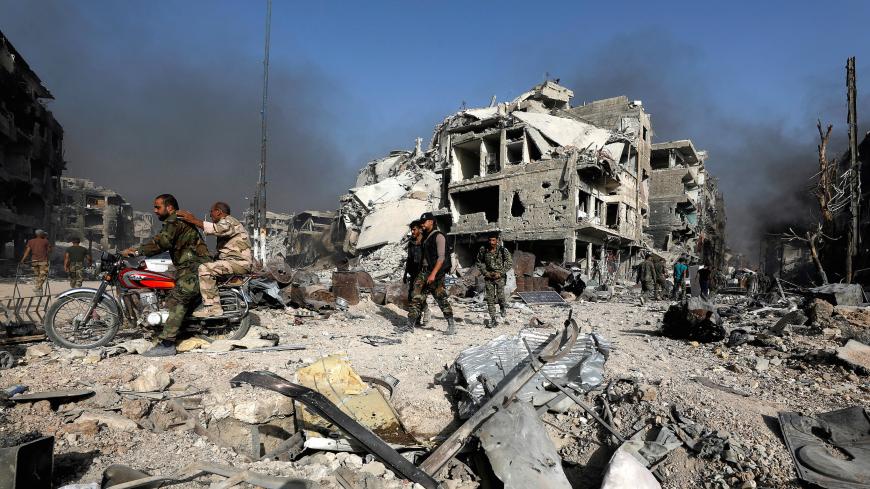 Syrian army soldiers ride on a motorbike at a damaged site in al-Hajar al-Aswad, Syria, May 21, 2018. - REUTERS/Omar Sanadiki

Even after the State Department appeared to patch up the US row with Turkey in Syria this week, Congress is getting increasingly fed up with the Donald Trump administration’s failure to provide legislators with a strategy for the war-torn country.

In a report accompanying the Senate’s must-pass annual defense authorization bill, lawmakers this week called out the Pentagon for “inconsistency” in its plan for Syria. US defense officials say that 2,000 US troops will stay there indefinitely, until the Islamic State (IS) is rooted out, despite President Donald Trump’s insistence that American forces leave the country “very soon.”

The Senate bill freezes $300 million requested for Syrian opposition fighters until the administration gives Congress an overdue and legally mandated outline of its plan for destroying the remnants of IS and stabilizing Syria. The bill also pegs $400 million for the anti-IS fight in next-door Iraq to a report on the “roles, missions and responsibilities of any future US military presence” in that country.

“The committee is deeply concerned by the lack of clarity and conflicting messages from administration officials related to the Middle East and, specifically, Syria,” according to the Senate Armed Services report. The report adds that the committee “believes that the activities of the US military in Syria are not adequately integrated into a broader strategy designed to stabilize Syria and address the factors that gave rise” to IS.

Specifically, the bill set to hit the Senate floor next week calls for the Pentagon to produce extensive reports on the train-and-equip program for the Syrian Democratic Forces (SDF), detailing the composition and capabilities of vetted fighters and US benchmarks for the program in rolling up residual pockets of militants. The push from Congress comes as the State Department brokered a strategically significant accord in US-led efforts to defeat IS, cutting a deal with Turkey June 4 that will see US-backed Kurdish forces that are part of the SDF leave the contested Syrian town of Manbij, recaptured from IS in June 2016.

Yet experts say the plan to settle the Manbij dispute by hosting joint military patrols with Turkish troops may not be an indicator that the White House has a broader plan for brokering a diplomatic settlement to the Syrian civil war. Instead, it may be more like an effort to ease the pressure on the dwindling IS campaign and re-establish its partnership with a key NATO partner.

“Ideally, you want to de-escalate tensions between Turkey and the SDF, so the latter can focus on fighting [IS],” Alexander Bick, a former Syria director on the National Security Council, told Al-Monitor. “And you don’t want the US to find itself in a firefight with a NATO ally.”

Though some wings of Trump’s team remain narrowly focused on Syria’s northeast, there have been efforts to build a broader US policy to weaken President Bashar al-Assad, who has gotten stronger since Russia’s 2015 intervention. The Daily Beast reported in April that before Trump publicly pressed for a withdrawal, the White House had been crafting a policy to keep US troops in Syria long-term, keeping forces in the agricultural and oil-rich Jazira province in the country’s north to bolster Kurdish troops and legitimize their autonomy from Assad.

State Department officials now insist that the Kurdish People’s Protection Units will withdraw from west of the Euphrates River in Manbij. Simultaneously, the Turkish-backed Free Syrian Army (FSA), which has fired on US patrols over the past year, has indicated a willingness to re-enter the city — complicating plans to use US-controlled territory as a counterweight to Damascus.

“The Free Syrian Army is ready to make a positive contribution to securing Manbij,” Mustafa Sejari, commander of the FSA’s Mutassim Brigade, told Al-Monitor via email. “We see it as a good opportunity to learn from the mistakes of the past and prevent repeating them, as well as to build real cooperation with Washington.”

Sejari said the FSA now hopes to receive US weapons and vehicles. Al-Monitor reported that representatives of the militia had been frozen out of a White House meeting in January.

The Pentagon continues to report all weapons deliveries to Turkey and has asked its opposition partners to return US weapons after IS is defeated. “They do understand that those weapons are recoverable when the mission is done,” Col. Thomas Veale, the spokesman for the US-led coalition fighting IS, said at a Pentagon briefing this week.

The leaders of the US-backed Manbij Military Council insist that Turkey’s leverage won’t increase, even as Turkish President Recep Tayyip Erdogan has looked to consolidate the so-called “Manbij pocket” near the border. But Syrian sources following the conflict in Turkey say the threat of force will remain a strong deterrent to Kurdish fighters re-establishing a presence there.

“Turkey will not need more than 300 troops,” said Manhal Barech, a Syrian journalist and activist. “But Turkey is capable of sending large numbers to impose a fait accompli in one way or another on the Arab fighters who harbor some hostility to them.”