The Farah Organization provides vocational education to Syrians in Daraa and Quneitra provinces who have been injured during the civil war and those with congenital deformities. 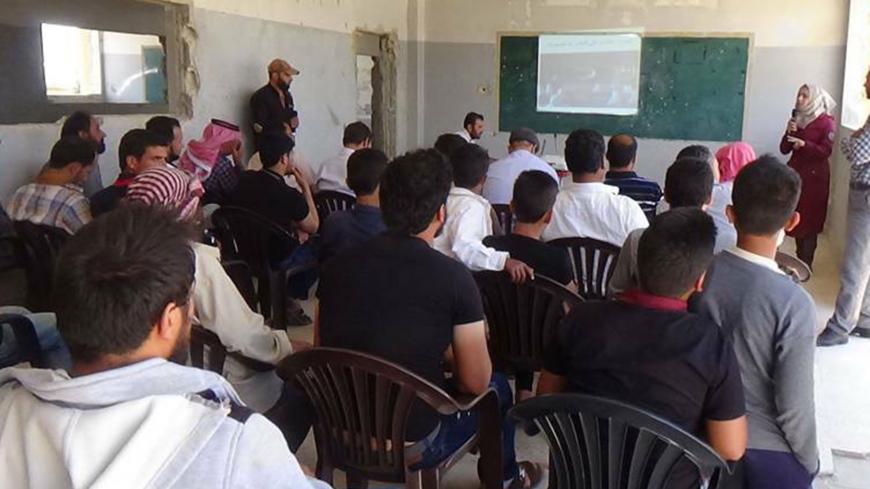 ALEPPO, Syria — Samer al-Hourani had worked as a bus driver since he was a teenager until he lost both legs following a bombardment that targeted Daraa, a city in southwestern Syria, in the summer of 2014.

“I was injured when a bomb targeted the place where I used to live in the city of Da'el in the countryside of Daraa. Both my legs were cut off following the bombing, and I could no longer work as a bus driver,” Hourani, a 35-year-old father of three small children, told Al-Monitor. “I had no means to provide for my family. Then friends told me about the Farah Organization, and I immediately joined it to learn a craft that would help me earn a living.”

The Farah Organization for the Rehabilitation of People with Special Needs and War Casualties, is an independent humanitarian organization that focuses on development, education and relief. It offers vocational education and psychological support to victims of the Syrian civil war and others with special needs, so they can gain new skills that would enable them to get jobs despite their disabilities.

“I chose to repair cellphones, as they are widespread in Syria, and I gradually got to know the tricks of the trade,” said Hourani, who is part of a five-month training program that will end in July. “By the end of the current program, I think I will be able to get a job in this field or even open my own cellphone repair shop. Things are now a bit easier for me compared to the last few months. No one wants to hire a disabled person, but this work only requires two hands, a sound mind, focus and practice.”

Following the truce concluded in July 2017 between the armed military opposition factions and the Syrian regime, under the auspices of Russia, the United States and Jordan, Daraa province has been relatively quiet. Civil society groups such as Farah can now focus on the rehabilitation of war victims suffering from various disabilities as a result of the fighting.

In early March, Farah inaugurated a center in the city of Nimr in Daraa province under the slogan “A person is only defeated by despair.” Currently 700 people are taking part in a five-month training program. In early August, another 700 residents of the adjacent Quneitra province will be given the opportunity to take part in a similar training program at a location in Quneitra.

Youssef Abu Yaacoub, the human resources manager at Farah, told Al-Monitor, that the trainees include both people with injuries and disabilities caused by war, as well as those with congenital deformities.

“The first training cycle started four months ago, and there is only one month left. This session includes fashion design, tailoring of men’s clothes, hairdressing, handicrafts, maintenance of electrical appliances, computer technology and basic repair skills. We also have a department to provide psychological support to people suffering from psychological trauma and disabilities resulting from war injuries and congenital deformities,” Yaacoub concluded.