Does Mhebis, a Ramadan tradition, have a future in Iraq?

Al-Muhaibis, or Mhebis, a traditional game centered around finding a ring, is being played by Iraqis this Ramadan, but some foresee its disappearance as younger generations prefer spending time online playing electronic games. 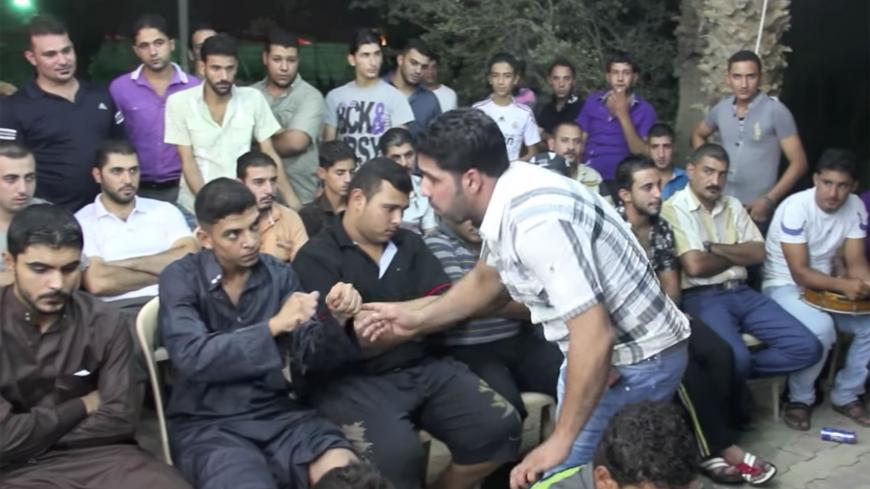 Iraqis play Mhebis in a still from a video uploaded Aug. 13, 2011. - YouTube/Prashant Rao

Iraqis of all sects and ethnic groups have been playing al-Muhaibis — or Mhebis, in Iraqi dialect — a game based on finding a hidden ring. It is thought to date back to the palaces and guesthouses of the Abbasid caliphs (750-1258). Now, playing Mhebis is mostly limited to the holy month of Ramadan, as today Iraqi children and youth, like their contemporaries almost everywhere, prefer to play online games or spend their free time on social media.

The Ramadan tradition is to sing “Baghdadi songs” — folkloric pieces native to and long sung in Baghdad and later elsewhere in the country — while gathering to form Mhebis teams. The competitors consist of two teams, each numbering some 50 players. One of the several referees conducts a draw between the two teams to see which one will start the game. Two people from the starting team then volunteer to shield their captain with a sheet or some other item, so the opposing team cannot see him as he walks among his players and puts a ring, typically belonging to one of the players, into the hand of one of the team members. The captain then says, “Baat,” signaling that the ring is in someone's possession, and the captain of the other team can begin looking for it.

The opposing captain scans the players, who sit or stand with stony expressions. Eliminating in his mind those whom he thinks are not concealing the ring, he then asks one who might have it to open his hand. The players cannot change places, and the ring cannot change hands. Trying to slip the ring to someone else and pretending that you do not have it if you do are violations. If the captain finds the ring, the chance to hide it passes to his team, which also earns a point. If he fails, the other team hides the ring again.

Walid al-Samarrai, who lives in central Baghdad near the shrine of the 11th-century Sufi cleric Abdul Qadir al-Jilani, has been playing Mhebis since he was a child, in the 1960s. He is now the captain of the Fadwat Arab neighborhood team, which has more than 100 players.

“The game of Mhebis was played during the month of Ramadan in the [Abbasid] ruler’s circle following iftar [the meal breaking the daily fast],” Samarrai told Al-Monitor. “The game then spread to the alleys of Baghdad. Local tribes also became interested in the game, and then it spread in other regions of the country.”

Samarrai claims that despite the changing times, among Iraqis, Mhebis ranks second in popularity after soccer. Lots of people watch the game in person and on television as well as play it, at least among the people around him.

During the Sunni-Shiite sectarian violence in Iraq from 2005 to 2007, Mhebis was played less because militant groups on both sides considered it entertainment that distracted people from worship.

Abdul Karim al-Lami, an independent social researcher, told Al-Monitor, “The game has faced great challenges, including the emergence of radical Islamic groups and their control of Shiite and Sunni areas. They threatened, abducted and killed those who played the game, which they deemed as one of the forbidden games. This led dozens of people to fall prey to these groups.”

On this topic, Samarrai remarked, “During the sectarian war, we rarely played Mhebis, but we [Iraqis] tried to use the game [positively] and organized a championship in 2006 that included all the Iraqi people. Our aim was to end tensions between the Sunni and Shiite areas, and we managed to hold the championship.”

According to Samarrai, a game can last more than 12 hours because it relies on individual elimination until there is a winner. “The organizers of championships use a particular ring that can't be forged in order to guarantee an honest competition,” he explained, before underlining one crucial element to a winning strategy. “The team captain cannot put the ring in the hands of just any player. [He] should look for players who can control their facial expressions and gestures so he won't give away the game. A game is to 13 or 16 points, where you score one point each time you find the ring.”

Samarrai hoped for there to someday be a regional championship. “We are trying to create a national team that can play against the Gulf states and the Arab Maghreb and Mashreq,” he said.

Kadhimiya, in northern Baghdad, is home to one of the most famous teams playing Mhebis. Often sweeping the national championships, it is led by the popular player Jasim al-Aswad.

“The game has strict rules, and whoever violates the rules is expelled from the tournament and is not allowed to participate in the following match,” Aswad explained to Al-Monitor. “Players must be over 18 years of age and of high moral standing. Meanwhile, the audience should not utter obscenities or chant slogans that incite sectarian strife.”

Awad added, “The game has a particular significance and contributes to the strengthening of community ties through competitions held between [teams from] the Iraqi provinces.” Like Samarrai, Aswad believes that success at Mhebis, which involves psychological thinking as well as role play, greatly depends on the “intuition and daring” of the captain and the players.

Despite dedicated players like Samarrai and Aswad, some think the game's days might be numbered. Lami, the researcher, told Al-Monitor, “The current decline in the practice of Mhebis is due to the fact that young people are hooked on social networking sites and are drifting away from popular, traditional practices.” He noted that Iraqis played the game more before 2003, and although the decrease can be attributed in part to people being wary of street gatherings because of the potential for mass violence, the larger problem is young Iraqis' lack of interest in their heritage.

“Mhebis might disappear in the next 10 years, just like other Ramadan games that have completely vanished,” Aswad said.