Cleaning up burned classrooms and destroyed statues, professors and students have reopened the Faculty of Fine Arts at the University of Mosul and even launched an art exhibition. 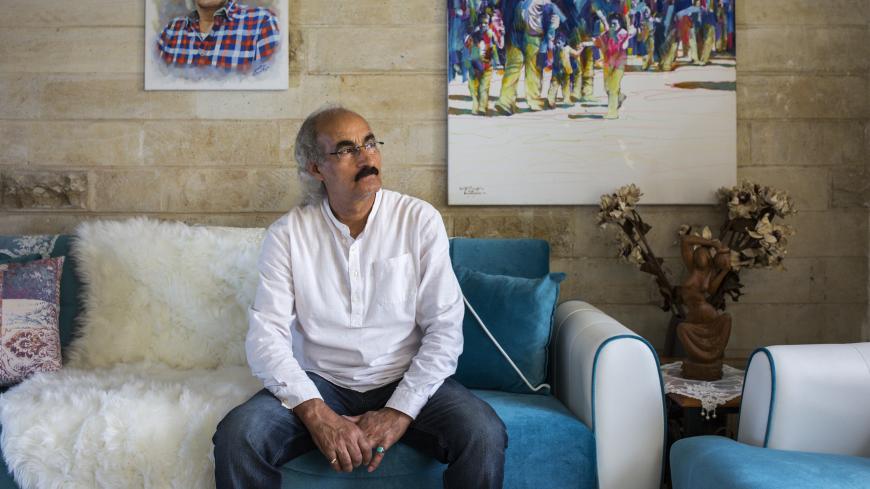 "It's the Old City of Mosul, with its beauty, that taught me to draw and paint," Khleif Mahmood, a painter and professor in the Faculty of Fine Arts at the University of Mosul, told Al-Monitor, as he showed his paintings of the Old City.

The city that has inspired him is now 70% destroyed by the international coalition’s airstrikes and street battles to fight the Islamic State (IS).

“I used to sit next to the Tigris River to paint some parts of the medina [Old City]. But if I go there today, I will not even recognize where I used to sit or where the buildings were. It’s all rubble, all destroyed,” he said, with pain in his voice.

Mahmood has spent years in displacement, living in Dahuk, part of the Kurdistan Regional Government in northern Iraq, Turkey, Germany and Baghdad. At the end of 2016, he returned to Dahuk, an hour north of Mosul. Finally, in November 2017, he resettled in his beloved city and returned to his work.

During the transitory period of February-July 2017, when only the eastern part of the city was freed, a few university classes were held in Dahuk and Bartella, a small town a few kilometers from Mosul, in very precarious conditions. Following the liberation of the whole city, the Faculty of Fine Arts at Mosul University reopened its doors in September 2017, readmitting a large part of its students.

“I am actually very busy with our students’ exams, and so I spend every day at the Faculty of Fine Arts,” Mahmood explained as he led Al-Monitor inside the faculty building, which opened in 1994. The small entrance of the Faculty of Fine Arts visually represents signs of IS’ intolerance — the faces of sculptures are ruined. Most of the classrooms and the furniture on the five floors were burned, but students and professors together tried to clean and rehabilitate at least the first floor so that they could hold classes there.

“Since I was a child, my dream was to become a painter and an artist,” Raghad al-Meleh, a 27-year-old student, told Al-Monitor. “When I first wanted to start my studies, it was already a challenging time. In 2008 some unknown criminals tried to kidnap my sister. They attacked her from a car, holding her by her feet in the street and then stealing her bag and running away. My documents to apply to the university were in her bag.”

Once Meleh entered the faculty, tough times were ahead. “I was in my senior year when IS fighters came,” she said. “They arrived on June 10, 2014, and we tried to escape on June 12. We spent a day in nearby al-Hamdania, but our home was in Mosul. We didn’t know where to go, so we came back. We lived the longest nightmare of our lives. Three years under IS was like 10 years for me.” Meleh is now back at the school and about to get her diploma.

All the rooms are filled with students, sitting at tables, holding a brush or taking exams. “We want to tell the world that we are back to life,” said Maysoon, a first-year student who did not want to give her last name. “My decision to study art after three years of occupation and war was my personal reaction to violence and to the fact that I spent all my time at home.”

Mahmood still suffers the consequences of the annihilation of the Old City to the point that he doesn’t want to go there and see it. He feels it is still dangerous and far too painful. “Most of my work has been destroyed by IS, both at home and at the Faculty of Fine Arts where I have taught for 20 years,” he said.

His decision to leave his beloved city after IS took control in June 2014 was out of necessity. “I found my name on their website’s blacklist three months after they occupied Mosul, and so I migrated with part of my family.” IS wanted to arrest and likely execute him simply for being a painter and a professor of fine arts. Mahmood is also the president of the Association of Fine Arts in Ninevah province. During the three years he was in exile, his house was occupied by a Russian family and later became a sort of hostel and meeting place for IS fighters. By the time Mahmood returned, the paintings had been destroyed and the building was severely damaged by airstrikes.

Together with his colleagues and students, he opened an exhibition May 7 titled “Displaced Inside the Homeland” at the Qantara Cultural Cafe in east Mosul, a newly opened venue that is part of a major effort to revitalize the cultural life of the city.

Mahmood's colleagues from the same faculty are also showing their work. Mahmood’s paintings are bright and colorful, although the stories behind them are full of fear and uncertainty.

“Our memories of the recent past still affect us and somehow make our artistic projects even stronger than before,” said Meleh, as she prepared her paintings for the final exam. “Despite all of the destruction in Mosul, the love for our city is still the biggest source of inspiration for students of the Faculty of Fine Arts.”