As some Arab states, struggling with their own problems, are paying less attention to the Palestinian cause and comatose reconciliation process, Moroccans are stepping up their support. 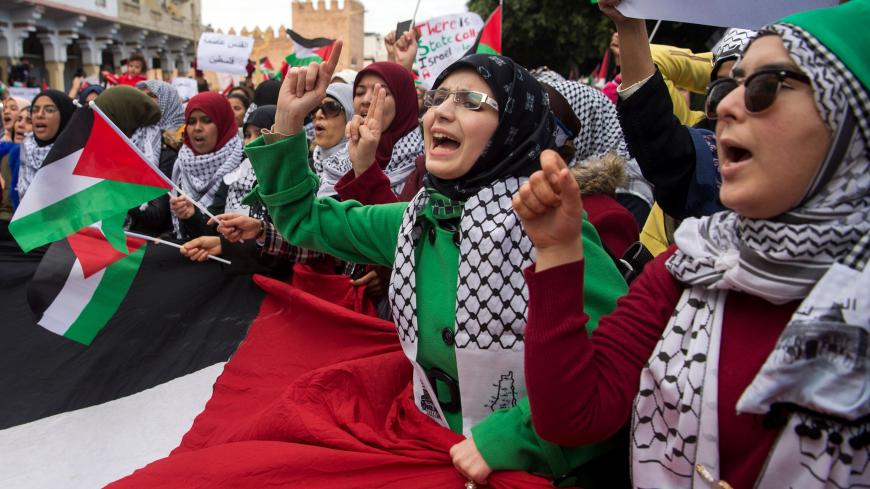 RABAT, Morocco — Morocco is becoming more involved in the Palestinian cause of late, staging a variety of events throughout May with the participation of Palestinian political parties and Moroccan organizations and institutions.

On May 5, the Moroccan National Working Group for Palestine organized a political seminar in Rabat that brought together representatives of various Palestinian political parties, including Hamas spokesman Sami Abu Zuhri, Fatah Central Committee member Abbas Zaki, Popular Front for the Liberation of Palestine (PFLP) member Maher al-Tahir and Munir Shafiq, secretary-general of the Popular Conference for Palestinians Abroad. The seminar focused on developments related to the plight of the Palestinians, most notably the faltering Palestinian reconciliation process and the controversial May 14 move of the US Embassy in Israel to Jerusalem from Tel Aviv.

“This is the most appropriate opportunity for Palestinian factions to meet in Morocco and overcome their differences,” Popular Conference for Palestinians Abroad spokesman Ziad al-Aloul, who attended the Rabat seminar, told Al-Monitor. “Morocco has offered the largest Arab arena for Palestinian parties from all political affiliations to come together and strengthen their relationship with official Moroccan institutions and civil society organizations.”

No other Arab state, with the exception of Egypt, has allowed all Palestinian factions to meet openly, publicly and officially.

Tahir, head of PFLP political relations, said during the seminar that the 10-year division between the Palestinian factions is ridiculous and should end. “We will continue our serious efforts to build a Palestinian national unity and hold a comprehensive national council that includes all Palestinian forces, without exception," he said.

Hichame Toufike, a researcher and activist at Al-Quds for Studies and Training (Jerusalem Institute for Strategic Studies, Training and Networking) in Casablanca, believes Morocco's efforts bring together all Palestinian factions to communicate.

“All the Palestinian parties that attended the recent events spoke of the need for Palestinian reconciliation and finding solutions for an all-inclusive Palestinian National Council. Morocco may indeed be the appropriate environment to meet in,” Toufike told Al-Monitor.

Morocco's role will not be as significant as Cairo's, he noted. In addition to its proximity to the Gaza Strip, Egypt is familiar with all the dimensions and details of Palestinian politics because it is involved in the Fatah-Hamas reconciliation agreement. “The increase of Palestinian meetings in Morocco [makes it] an important pit stop for Palestinian factions to find joint action and reach reconciliation,” Toufike added.

On May 11, Mohammed V University and Khaled al-Hassan Center for Research and Studies, under the supervision of Palestinian political science professor Said Khaled al-Hassan, held a conference on human and social sciences in Rabat titled “The Jerusalem Cycle: Our Thoughts Over the Last Century — Its Issues and Cultural Origins.” A number of Arab researchers participated, coming from countries such as Egypt, Tunisia, Morocco and Palestine. The conference focused on the Palestinian situation and the future of education curricula in Palestine.

On May 13, PLO Executive Committee member Azzam al-Ahmad and Palestinian Ambassador to Morocco Jamal al-Shobaki participated in meetings and events in Fez in support of the Palestinians, at the invitation of Moroccan academic and cultural institutions. The men also attended the Fez Cultural Festival — organized by Al-Eshraq Association for Development in partnership with the Ministry of Foreign Affairs and International Cooperation of Morocco — where Palestine was the guest of honor.

Several popular rallies took place in just one week in the Moroccan cities of Rabat, Casablanca, Tetouan and Mohammedia, in solidarity with Palestine. The rallies were organized by the Justice and Development Party, the Justice and Spirituality Association, and various socialist parties, as well as the opposition's Authenticity and Modernity Party. Civil society organizations, including the Moroccan Coalition to Support Palestine and Resist Normalization, staged several rallies.

Moroccan King Mohammed VI, in his capacity as chairman of the Jerusalem Committee of the Organization of Islamic Cooperation, wrote a letter May 14 to Palestinian President Mahmoud Abbas. In it, the king described the transfer of the US Embassy in Israel to Jerusalem as “violating international law and relevant [UN] Security Council resolutions that stipulate the inadmissibility of changing the legal and historical status of the Holy City.”

Moroccan Prime Minister Saadeddine Othmani said at a May 17 Cabinet meeting that his country “will continue to support the Palestinians so that they can enjoy their independent state with Jerusalem as its capital.” He further stressed his country's special and historical relationship with Jerusalem and Palestine and thanked all civil institutions, associations and citizens of Morocco who expressed their rejection of the embassy relocation.

While Arabs seemingly have shown an unprecedented loss of interest in the Palestinians' cause — primarily their right to the return of their now-occupied ancestral lands — Morocco leads peaceful pro-Palestinian activities and events. On May 20, Moroccans staged a mass rally in Casablanca in support of the Palestinian cause and denouncing the US decision to move its embassy.

Lahcen al-Amrani, deputy mayor of Rabat, issued an official decision May 19 suspending a "twin city" project with Guatemala City in protest against Guatemala also transferring its embassy in Israel from Tel Aviv to Jerusalem.

Yahya Alem, a political researcher at the University of al-Qarawiyyin in Fez, told Al-Monitor that Moroccans' actions in favor of Palestinians have increased noticeably. “There is unlimited Moroccan support to the Palestinian cause on the popular level, as well as on the level of civil initiatives that focus on confronting the figures and institutions that are pro-normalization with Israel,” he said.

On the official level, Morocco "can play an important role in Palestinian reconciliation," he added. "Morocco has recently shown openness to all Palestinian national parties by constantly calling on both the Hamas and Fatah movements to attend seminars and meetings with Moroccan parties and civil society organizations.”