For Netanyahu, Israel’s only problem is Iran

Prime Minister Benjamin Netanyahu pretends the Iranian threat is the only problem that Israel faces. 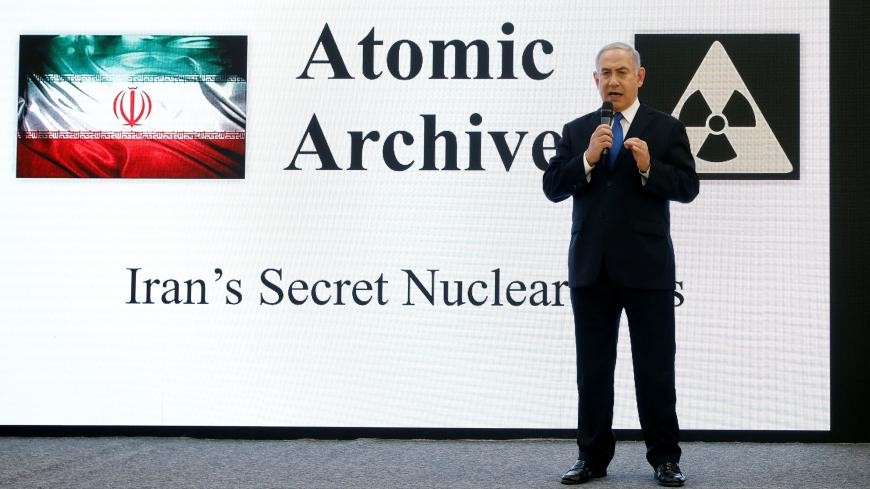 “We have three problems,” Defense Minister Avigdor Liberman quipped during an April 29 speech in New York, “Iran, Iran, Iran.” Israel does not have a Palestinian problem, nor problems of poverty and corruption. Fortunately, there is Iran. Liberman did not invent the Iranian magic bullet for every ailment. That patent is registered to Prime Minister Benjamin Netanyahu, the country’s top presenter who on April 30 recycled information about Iran’s nuclear program using amateurish show-and-tell aids. Here is what the prime minister said three years ago in response to a sharp rebuke by the government’s watchdog agency, the State Comptroller, on housing policy failure: “When we talk about the cost of housing, cost of living, I never forget for one moment life itself.” This is how Netanyahu dismissed his critics for dealing in minutiae. And what is “life itself”? The struggle against Iran, of course. “The biggest threat to our lives now is Iran’s nuclear armament,” Netanyahu went on to explain on his Facebook page.

In addition to the Iranian nuclear issue and Iranian-sponsored terrorism, Israel now has the Iranian problem on the Syrian border. However, an additional Iranian problem hides behind these three but fails to get worthy coverage; when “life itself is under threat,” only a fool would bother the man who protects it with questions about a few cigars (as Netanyahu supporters refer dismissively to the police investigations against him on suspicions of corruption). Netanyahu himself advanced this approach only recently, when he insisted on speaking at the April 18 torch-lighting ceremony marking Israel’s 70th Independence Day, against the tradition reserving that honor to the Knesset speaker. When Netanyahu conducted his hostile takeover of national prime time and spoke about “our enemies that think we’re a passing fad," who wants to think about the state of the country’s education system? How many Israelis took the trouble to fact-check the speech by the prime minister, who pledged on Israel’s festive birthday, “In 70 years, you will find here a state that is far stronger than today.” His promise is based on the assumption that a country’s long-term might is only measured by the number of its missiles, fighter jets and tanks.

“Many, many countries, on all continents, admire our material and spiritual achievements, our achievements in science and culture,” Netanyahu boasted at the event. Several days later, the Aaron Institute for Economic Policy at the Interdisciplinary Center in Herzliya posted on its website a set of indicators measuring Israel’s performance in 10 key policy areas and comparing them with averages measured in the world’s most developed countries. It found Israel lagging behind in all areas, other than health care. Despite Israel’s robust economic growth, the net poverty rate — after discounting for taxes and benefits — is the highest in the developed world, as measured by the Organization for Economic Cooperation and Development (OECD). The number of murders, attacks and rapes per capita is higher than in most other developed countries, i.e., OECD member states. Israel is also behind in terms of a significant number of environmental protection indicators.

Netanyahu cited Indian Prime Minister Narendra Modi, who crowned Israel a “technological powerhouse” on a recent visit here. The prime minister never misses an opportunity to boast of Israel’s high-tech prowess. However, the success is not due to government policy; it is achieved despite government policy. According to the Aaron Institute, Israel lags behind the developed world in terms of both results and effectiveness. For almost 20 years, Israeli schoolchildren have been ranked in or around 40th place in the international PISA tests that measure scholastic achievements of 15-year-olds in dozens of participating countries (72 took part in 2015), and in first place in terms of the gap between the strongest and weakest students compared to other OECD countries.

Israel Bank experts point to the direct link between the failure of Israeli students in international testing and their subsequent poor performance as adults in international PIAAC skill surveys, which assess the basic skills and competencies of adults around the world, and low productivity rate in the workplace. Despite the low rankings, Israel is still placed in the bottom third of OECD member states in expenditure per student. According to the Knesset Research and Information Center, the rate of government spending on nonmilitary-related research and development — especially in the fields of health, environment and energy — is significantly lower than the OECD average.

The 2019 budget includes cuts of some 25% in the country’s agricultural research by the Volcani Center. The Ministry of Agriculture’s chief scientist Avi Perl said recently that he fails to understand how such a severe blow to the institute’s activity fits in with the boasts to the world about Israel’s scientific and agricultural research development and its mobilization for giant projects in India, China and Russia. It is also difficult to understand how the ongoing cuts in the higher education budget fit in with the bragging about Israel’s status as a “technological powerhouse.”

On the 70th anniversary of its founding, the State of Israel has no lack of problems, chief among them efforts by Iranian religious zealots to take over the region and the protracted conflict with the Palestinians. A focus on a defense-oriented agenda plays into the hands of the Netanyahu-led right wing in two ways: A public focus on the immediate “Iran threat” both perpetuates the longing for someone portrayed as a strong leader and sweeps under the Persian rug burning social problems, such as health care and education, that Netanyahu has downgraded to the status of “quality of life” issues. The problem is that contempt for quality of life results, eventually, is contempt for life itself.