Some animal-drawn cart owners are finding it hard to make ends meet as the Egyptian government intensifies its crackdown against them as part of its campaign to fight traffic congestion in Cairo. 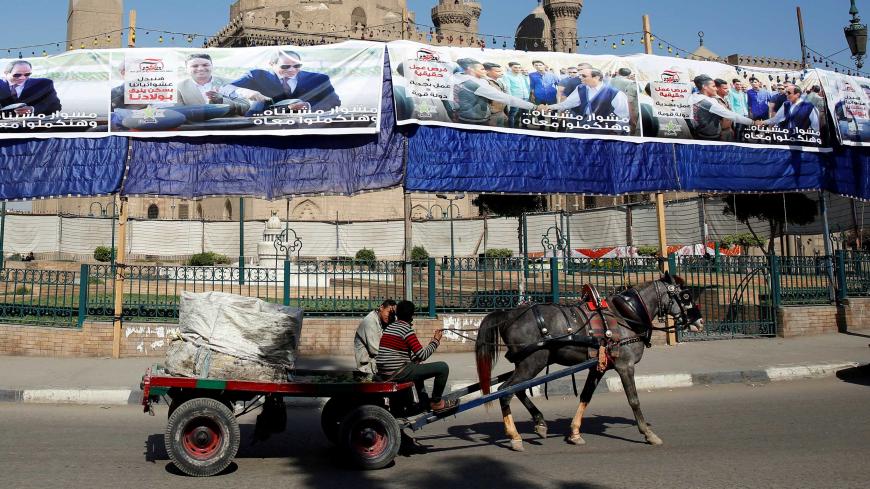 Egypt’s animal-drawn cart owners are struggling as the government has intensified its crackdown on them in the last few months in order to clean up Cairo’s streets and ease traffic congestion, which costs the Egyptian economy billions of dollars.

The campaign, called “Cairo Without Animal-Drawn Carts,” started in October 2017 with the aim of putting an end to a scene that upsets many residents while at the same time guaranteeing a dignified life for the cart owners by giving them an alternative — either a motorcycle or a pickup truck, depending on their needs.

The price of the vehicle is paid for in part by selling the cart and the remainder is funded by soft loans repaid to the government in either short-term or long-term installments. The motor vehicles provided to cart owners are financed by the Social Fund for Development, the Ministry of State Housing, Utilities and Urban Development and the National Bank of Egypt.

Khaled Moustafa, the spokesman for the Cairo governorate, said that a total of 130 animal-drawn cart owners have given up their carts since the campaign was launched in October, and that some of them are now taking driving lessons in order to drive the motor vehicles.

“Now a large number of cart owners are being convinced that they should give up their carts to the government because if they get caught, their carts will be confiscated and they can face fines. The animals are also being given to animal rights associations,” Moustafa told Al-Monitor. The fine amounts to up to 16,000 Egyptian pounds ($900).

Moustafa added that some cart owners said they cannot read or write and therefore will not be able to obtain driver's licenses. “That's why we have started to offer those cart owners, in cooperation with civil society organizations, lessons to learn to read and write so they can obtain their driver's licenses,” he added.

The initiative comes as part of government efforts to bring the capital back to its previous glory and put an end to traffic congestion that is partly caused by having these animal-drawn carts walking down the streets. Since 2014, the government has been taking a raft of measures to preserve the history of the capital’s streets and restore Cairo to the beautiful and clean city it was in the past. The measures have included garbage-removing campaigns, upgrade projects such as the restoration of historical buildings and initiatives to turn the walls in Cairo metro stations into graffiti masterpieces.

There are about 1,718 animal-drawn carts in Cairo, according to Cairo Gov. Atef Abdel Hamid. Abdel Hamid said in an interview with Al Bawaba News May 13 that the number of animal-drawn carts had declined by 25% since the start of the initiative, noting that Cairo will be free of carts by this summer.

Some cart owners said that the initiative is weighing down on their financial situation and causing them to face hard times on the streets.

Am Mohamed, a donkey-drawn cart owner who uses the cart for selling fruits, said that he has been suffering over the past few months as the government is dealing strictly with any animal-drawn cart owners. “They take our carts and our animals and also give us a fine,” Mohamed told Al-Monitor.

Mohamed, who hangs around with his cart in Heliopolis, in eastern Cairo, said he started to avoid walking with his cart in the main streets in order not to be caught by the local municipality. “I do not know what I will do if the government took this cart from me,” he said.

Some cart owners in other areas have not yet heard about the initiative. “I have not heard of the initiative, and I am against it. That's because someone like me cannot drive a motor vehicle. I also do not have any other source of income; the cart is my only source of income,” Hassan Abdullah, a cart owner who sells scraps and used items in Kobry el-Qoba, in eastern Cairo, told Al-Monitor.

Cart owners who have positively responded to the initiative said that the campaign seeks to improve their social conditions and living standards and provide a dignified life for them. “At first I did not like the initiative, but when I saw the government intensifying its crackdown on cart owners, I gave up my cart. Now I am convinced that the initiative is good because it helps cart owners eliminate their illiteracy and get a driver's license; at the same time it beautifies the capital’s streets and makes it pleasant for citizens and tourists,” Am Ismail Abdel Hakeem, who used to sell vegetables with his cart, told Al-Monitor.

“It would have been better if the government replaced the carts with beautiful tricycles, which are environmentally friendly and would not cause any harm to the look of the capital,” Fahmy told Al-Monitor.