Ankara’s enthusiasm over President Trump's promise to pull out of Syria is dampened by President Macron’s promise to increase support for Syrian Kurdish groups opposed by Turkey. 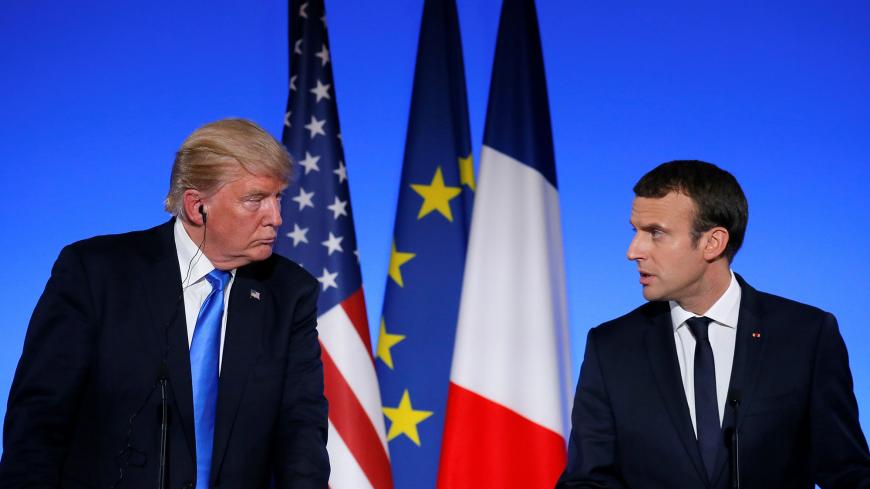 The meeting between President Recep Tayyip Erdogan and his Russian and Iranian counterparts, Vladimir Putin and Hassan Rouhani, in Ankara this week has gained added significance for Turkey in light of potentially game-changing developments in Syria.

First there was President Donald Trump’s remark about withdrawing from Syria, and then there was French President Emmanuel Macron’s vow to provide strong backing for Syrian Kurdish groups opposed by Turkey as terrorist organizations.

Trump's surprise remarks on March 29 — and his decision to freeze $200 million allocated for regions held by Washington’s Kurdish allies in Syria — have been warmly welcomed by Ankara, despite lingering doubts.

Talking to reporters on March 31 as he was flying back from a visit to Bosnia and Herzegovina, Prime Minister Binali Yildirim complimented Trump on his “courageous decision.” He added that although different branches of the US government were saying they knew nothing about plans to withdraw from Syria, it was Trump’s words that Turkey looked to.

Ankara’s enthusiasm, however, was dampened with reports from Paris that a group from the Syrian Democratic Forces (SDF) — made up largely of the People's Protection Units (YPG) and the Democratic Union Party (PYD), the Kurdish group Turkey is targeting in Syria — had been received at the Elysee Palace in Paris.

The fact that this meeting took place after a phone conversation between Trump and Macron on March 27 and also a day after Trump’s remarks regarding a withdrawal from Syria inevitably resulted in various conspiracy theories in Turkey.

Many see a link between these developments and believe a secret agreement may have been reached behind Turkey's back between Washington and Paris regarding Syria.

A statement from Macron’s office on the meeting with the SDF delegation merely added to Turkish misgivings.

“[President Macron] assured the SDF of France’s support for the stabilization of the security zone in northeast Syria within the framework of an inclusive and balanced governance to prevent any resurgence of the Islamic State,” the statement said.

This region, which is larger than three Lebanons put together, is currently held and administered by the YPG with backing from the United States and France. Erdogan insists that this whole region will be cleared by Turkey of the YPG by force if necessary.

Ankara was also livid after representatives from the SDF delegation received by Macron also claimed that France would be sending additional troops to Manbij to support YPG fighters there against Turkey.

Paris has not confirmed this claim. It has, however, confirmed that Macron is offering to mediate between Turkey and the YPG, which increased the anger felt in Ankara.

These developments have also put an end to Erdogan’s hopes of cultivating a special relationship with Macron, who until recently appeared to be the only interlocutor he has left in Europe.

Erdogan met Macron in Paris in early January, and his visit was generally hailed in Turkey as highly successful and as proof that Erdogan was not as isolated in Europe as was being claimed. Since then, the two leaders have held frequent phone conversations — mostly concentrating on Syria.

Relations between Ankara and Paris began to sour within weeks of Erdogan’s visit to Paris, after Macron criticized Operation Olive Branch that Turkey launched against the YPG on Jan. 20. Macron said this should not be turned into an excuse to invade Syria.

The visit by the SDF delegation to Paris will contribute to heightened tensions in Turkish-French relations. Macron is in Ankara’s direct line of fire now.

Addressing a meeting of his Justice and Development Party in Ankara, Erdogan said, “Those who welcome members of a terrorist group at the highest level should know that this is nothing but a display of enmity toward Turkey.”

Going on to accuse Macron, Erdogan added, “Who are you to pronounce mediation between a terrorist organization and Turkey? … Those who haven’t accounted for their own bloody past may choose to see themselves side by side with terrorist organizations, but this is definitely out of the question for Turkey.”

He was referring to France’s past in Algeria, a theme Turks regularly resort to when opposing France.

Deputy Prime Minister and government spokesman Bekir Bozdag went even further. “Those who cooperate with terrorist organizations against Turkey will receive the same treatment as terrorists, and like terrorists [they] will be targeted by Turkey,” Bozdag threatened.

The timing of Trump’s statement and Macron’s support for the SDF delegation has resulted in a slew of mixed comments by Turkish analysts.

Fahrettin Altun, from the pro-government daily Sabah, argued that if Trump honors his word, this will not only provide a great advantage to Turkey in its fight against the YPG but also alter the balances in Syria to Ankara’s advantage.

Altun believes that Trump’s decision regarding a pullout from Syria is the result of Turkey’s successful operation in Afrin against the YPG.

“Turkey showed the United States that cooperating with the YPG comes at a high cost,” Altun wrote.

Mehmet Acet from the pro-government Yeni Safak believes that Trump will keep his word and withdraw from Syria, despite resistance from various branches of his administration. “He has long since put into force some of the seemingly outlandish promises he made before the elections. … I believe he will not give up easily on what he said about Syria,” Acet wrote, echoing the hope in official circles.

Independent analysts and more sober-minded government officials, however, doubt that Trump can carry out his promise. They argue that it goes against the grain to expect the United States to pull out of Syria at a time like this and they believe Trump is only engaging in politics.

Sedat Ergin from the daily Hurriyet wrote that it’s not difficult to predict that Trump will face stiff resistance from his own administration if he were to try and pull out of Syria.

“[Washington’s] attempts to counterbalance the increasing influence of Russia and Iran in Syria, including using the Syrian Kurds as part of this strategy, play a key role in shaping Washington’s Syrian policies,” Ergin wrote.

“If implemented, the most important outcome of this new policy will be that the regime of Syrian President Bashar al-Assad, Russia and Iran will have more room to maneuver,” Ergin argued.

Soli Ozel from the daily Haberturk wrote that Trump had promised not to get embroiled in Middle Eastern wars during his election campaign. “It’s not odd for [Trump] to appease his support base with such ‘good tidings’ at a time when he is in a tight spot in domestic politics,” Ozel wrote.

Ozel, however, also believes that it makes no sense to expect an administration that is obsessed with Iran to want to withdraw from Syria.

With regard to the French position, Ergin asserted that since being elected, Macron has been trying to make France a powerful international actor again. “He wants to establish a high profile for France in Syria, which of course was once within France’s zone of influence,” Ergin wrote.

Ergin added that Macron may also be responding to criticism at home that he has not done enough to protect the Kurds in Afrin against Turkey.

While it is uncertain if Macron will be able to fulfill his dream, it also remains doubtful that Trump will be able to do as he says. What will remain in that case is the potential for increased tensions between Ankara and Washington and Ankara and Paris, and the possibility of some kind of military standoff between NATO allies if they cannot overcome their differences in Syria.