The Tunisian Truth and Dignity Commission vows to continue its efforts to help victims of human rights violations, despite parliament's efforts to dissolve the group. 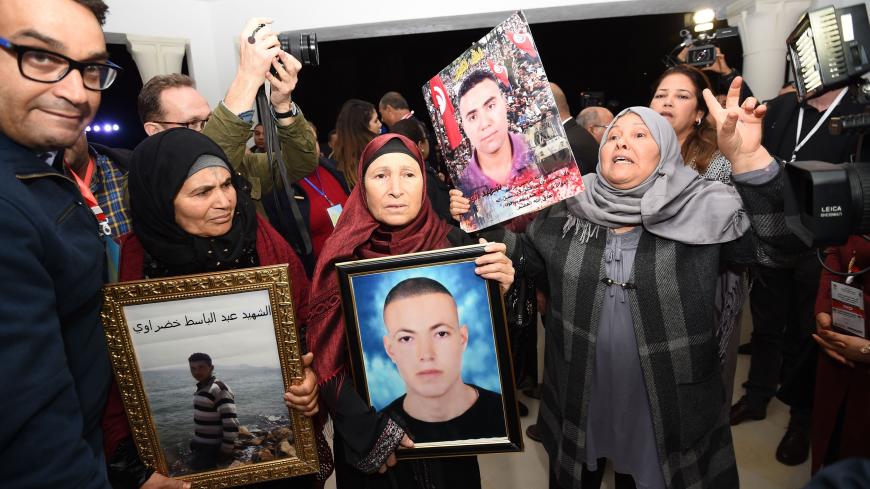 Tunisian mothers of torture victims carry their sons' portraits as they arrive for a hearing before the Truth and Dignity Commission, Tunis, Tunisia, Nov. 17, 2016. - FETHI BELAID/AFP/Getty Images

After the Tunisian parliament voted not to extend the mission of a human rights commission for another year, victims' advocates labeled the vote invalid and warned politicians April 5 to expect repercussions, as commission members pledged to carry on with their work.

The Truth and Dignity Commission is an independent, constitutionally backed body tasked with implementing the transitional justice law by investigating gross human rights violations committed by the government since 1955, largely under the rule of former Presidents Habib Ben Ali Bourguiba and Zine El Abidine Ben Ali. The commission, which began its work in 2014 after the 2011 Tunisian revolution that launched the Arab Spring in the Middle East and Africa, has received tens of thousands of cases and is also responsible for helping victims recover and receive compensation.

During a tense session March 26, parliament voted against extending the Truth and Dignity Commission's mandate for another year. Some political parties accused Speaker Mohamed Ennaceur of violating parliament bylaws, as he insisted on holding a session without a quorum of one-third. ​Only 70 out of 217 members were present, while 73 were needed.

The Tunisian Victims' Coalition for Dignity and Rehabilitation — which comprises more than 50 human rights organizations monitoring the transitional justice process — is following the situation.

Hussein Bousheba, a founding member of the coalition and a victim covered by the transitional justice law, told Al-Monitor, “The coalition pledged to follow up on the transitional justice path stated under the constitution that was passed following the revolution, starting with revealing the truth, [extending] to accountability and reparations for victims and ending with a comprehensive reconciliation with the aggressors." However, the law itself has become a vehicle for settling scores among political parties and blocs in parliament, he said.

He underlined that his coalition called on President Beji Caid Essebsi, Prime Minister Youssef Chahed, Ennaceur, national organizations, the Tunisian General Labor Union and leaders of political blocs to assume political and moral responsibility so as not to undermine the path for transitional justice.

Bousheba insisted that the public will have the last say; he considers it the last option for the victims of torture and authoritarianism in their struggle to defend their rights and pressure the government.

Two prominent parties, Ennahda and Nidaa Tunis, took opposite sides of the debate.

Ennahda, which had walked out of the parliamentary session saying the vote was invalid because of procedural violations, issued a statement March 28 stressing that the movement is committed to the path of transitional justice as a "national milestone." Ennahda condemned the tense atmosphere in which the voting session was held.

Nidaa Tunis — which is affiliated with the speaker — issued a statement March 26 praising its bloc’s vote against extending the commission’s mandate. The group also announced it will present an alternative bill to pursue transitional justice. It didn't, however, reveal details. Critics say the commission has worked too slowly and is being mismanaged and that politics play too large a role in its functioning.

Ola Ben Najma, a Truth and Dignity Commission member, told Al-Monitor, “The commission will continue its work for another year despite the parliament’s decision not to extend its work.”

Ben Najma explained that since the commission began working in 2014, it has received more than 65,000 files concerning victims of violations, including killings, torture and rape as well as forced disappearances and arbitrary dismissals. She also stressed that the commission is committed to studying all the files to achieve transitional justice as well as reparations for all victims in a legal atmosphere, away from vendettas and avenging aggressors.

She also expressed her fear that some governmental institutions and ministries will deliberately obstruct the commission's work. For example, she said, the Ministry of Interior has refused to allow the commission to view the archives of the secret police and the military court, blocking access to victims' files.