Tourism and joint development projects should get a boost from recently resumed flights between Cairo and Moscow. 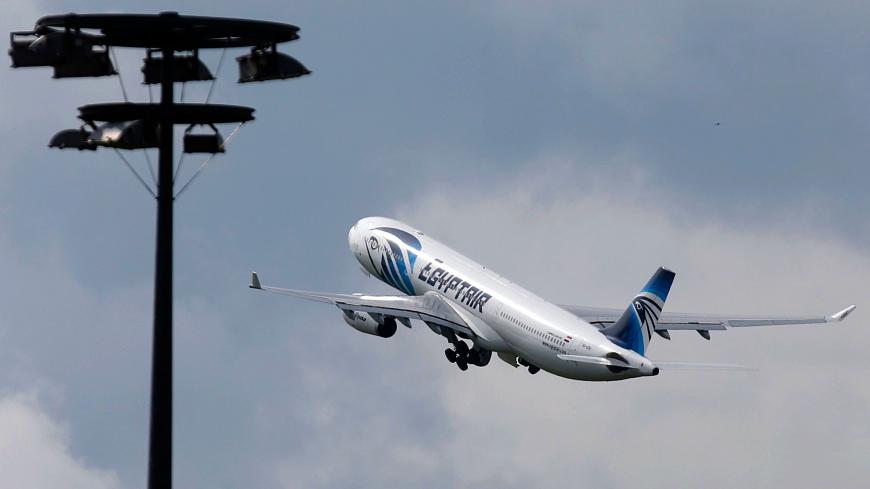 An EgyptAir plane takes off from Charles de Gaulle Airport in Paris, France, May 19, 2016. - REUTERS/Christian Hartmann

Relations between Russia and Egypt appear to be back on track, especially now that direct flights between their capitals have been re-established after 2½ years. The two countries have finally overcome their “common trauma,” as the events around a 2015 terror attack over the Sinai Peninsula came to be called in Egypt.

Aeroflot’s first flight to Egypt since the tragedy departed for Cairo on April 11, and the passengers received flowers as a greeting gift. The next day, an EgyptAir flight landed in Moscow. The plane, which was unveiled to the public in March, belongs to Egypt’s national soccer team and was deliberately chosen to celebrate the resumption of flights before Moscow hosts the 2018 FIFA World Cup in June.

At Moscow Domodedovo Airport, the aircraft taxied through a water arch created by two fire engines; the “water salute” is aviation’s traditional welcoming rite for special occasions. The renewal of flights is indeed special — a long-anticipated, crucial event for both nations.

Air services were halted after the Sinai attack Oct. 31, 2015, when an explosive device detonated onboard a Kogalymavia Airlines (Metrojet) flight bound from Egypt’s Sharm el-Sheikh to St. Petersburg, Russia, killing 217 passengers and seven crew members. Later, the Islamic State claimed responsibility for the attack. As a result, the flow of Russian tourists to Egypt virtually ceased.

In 2014, a year before the tragedy, tourism accounted for 11.3% of Egypt’s gross domestic product and brought in 14.4% of foreign currency revenues. Russian citizens made up the largest group of all foreign tourists visiting the country. According to the Russian Federal State Statistics Service (Rosstat), in 2014, 2.6 million Russians spent their vacations in Egypt, which was one-third of the entire tourist flow that year. In 2015, the number dropped to 1.8 million. The record had been set before the Arab Spring erupted in 2011: In 2010, about 4 million Russians visited the country.

After flights from Russia were suspended and security concerns caused the flow of visitors from other countries to dwindle as well (for instance, Great Britain also ceased flights to Sharm el-Sheikh), thousands of Egyptians lost their jobs. So it’s not surprising that every tourism professional from Egypt with whom Al-Monitor spoke said they anticipate the arrival of visitors from Russia. At the same time, they understand that hardly anyone will be heading to the resort cities from Cairo for vacations, as, after the flow of tourists dried up, such flights were used instead for freight or were aimed at business travelers and students.

Egyptians are eager to have air service restored between Russia and the resort cities of Hurghada and Sharm el-Sheikh, but that’s not expected to happen until September at the earliest. In late March, Russian Minister of Transportation Maxim Sokolov said discussions with Egyptian officials about resuming the resort flights are planned for late spring or early summer.

Businesspeople also want direct flights to be restored to other cities so they can maintain and increase cooperation in development projects and trade. Last year, bilateral trade between the countries increased by 62%, reaching $6.7 billion — the highest amount ever seen in the history of economic relations between Russia and Egypt.

That year, Russian exports to Egypt were $6.2 billion, while Egypt’s exports to Russia reached $504.6 million.

The obvious trade imbalance is generally connected to the assortment of commodities, as the food trade doesn’t generate as much income as many other sectors. Moreover, according to business sources, it can be difficult to work with Russia. Russian entrepreneurs do not issue letters of credit and rarely agree to pay in advance. Securing transactions through the country’s banks is prohibitively expensive.

These same sources think Russia could have even expanded exports, but its entrepreneurs tend to skip a large number of bids. Another problem lies in the infrequency of direct contact between businesspeople of two nations.

The question now is whether the situation will improve after Egypt opens an industrial free trade zone near the New Suez Canal for Russia and other members of the Eurasian Economic Union (currently Kazakhstan, Kyrgyzstan, Belarus and Armenia). The project is considered key for future development cooperation between Russia and Egypt. The complex will occupy 5 square kilometers (1.9 square miles, or 1,235 acres) of territory. Egyptian Minister of Industry Tarek Kabil told Kommersant newspaper that investments during the project’s first five to seven years are expected to be $7 billion.

It’s also important to understand what companies are going to settle in this area. Currently, all discussions on the matter refer to corporations that build vehicles and assemble agricultural machines. Cairo points out that the corporations will be chosen by Russia, particularly by the Ministry of Trade and Industry. Though Kabil said that Russian companies won’t be obliged to have Egyptian partners to start working in the area, Russian diplomatic sources and businesspeople in both countries disagree.

“There is no sense in going to Cairo without a partner and a guaranteed market for production,” said one source who spoke with Al-Monitor on condition of anonymity.

An official in the Russian trade and industry segment, who also asked to remain anonymous, claimed Russia was dragged into the project strictly for political reasons. The development won’t actually be beneficial for Russian businesses, according to the source.

“This is just flag-waving. Russia’s internal market alone devours anything we produce and is also profitable. Only those who guaranteed the market for their production or transport it through the Suez [Canal] would risk [the venture] without any pressure from the ministry,” the official said.

So the effectiveness of the industrial area remains to be seen.

On the other hand, another large-scale project — the construction of El Dabaa, Egypt’s first nuclear power plant — is undoubtedly credible and will be profitable for both sides. The agreement on construction of four units, each with 1,200-megawatt capacity, was signed in 2015, at the same time the sides arranged to provide Cairo with a $25 billion loan to build them. However, the contracts weren’t finalized until late 2017. Egypt needed this lag time so that, among other reasons, it could adopt nuclear industry laws. Sources working on cooperative efforts between Russia and Egypt say that after the four units are built, more will come, ensuring fruitful, long-term collaboration between the nations. Officials expect construction of the first four units to take 12 years.

Officials in Egypt contacted by Al-Monitor also point out that one of the main reasons Egypt wants to cooperate on development with Russia is because Moscow never meddles in Egypt’s internal policy and always keeps politics out of economic relations in the region. The Middle East has seen numerous occasions when contracts lagged due to sanctions, especially in strategically crucial sectors such as the nuclear industry.

“Even those members of parliament who were skeptical toward Russia have now changed their opinions,” Sayed Abdel Aal, a parliament member and leader of the Tagammu Party, told Al-Monitor.

Many politicians probably support Russia because of Sisi’s personal contacts with Russian President Vladimir Putin. The men understand each other without saying a word. Their journeys through life are quite similar, as are their ambitions to reform their countries. The leaders also have common challenges in their fight against terrorism. Their relationship helped the countries reach a reasonable resolution after the Russian plane tragedy, even though the air service suspension and the halt in tourist flow had a negative impact on Egypt.

The two countries don’t necessarily share views on every issue of the Middle Eastern agenda. For instance, Cairo has had its own opinions regarding the Syrian conflict. Yet Moscow respects Egypt’s balanced position and efforts to mediate.

Maybe some projects are indeed just about “flag-waving” and will turn out to be worthless. Moscow and Cairo don’t always correctly understand each other’s expectations — mostly on economic issues — yet Russia sees Egypt as a credible and largely predictable partner, which is rare among Middle Eastern nations. From Egypt’s perspective, cooperating with Russia, unlike with some other partners, is also predictable — and profitable.