Pentagon acknowledges US contractor presence in Syria for first time

The US military revealed in a new report that some 5,500 contractors are helping fight the Islamic State in Iraq and Syria. 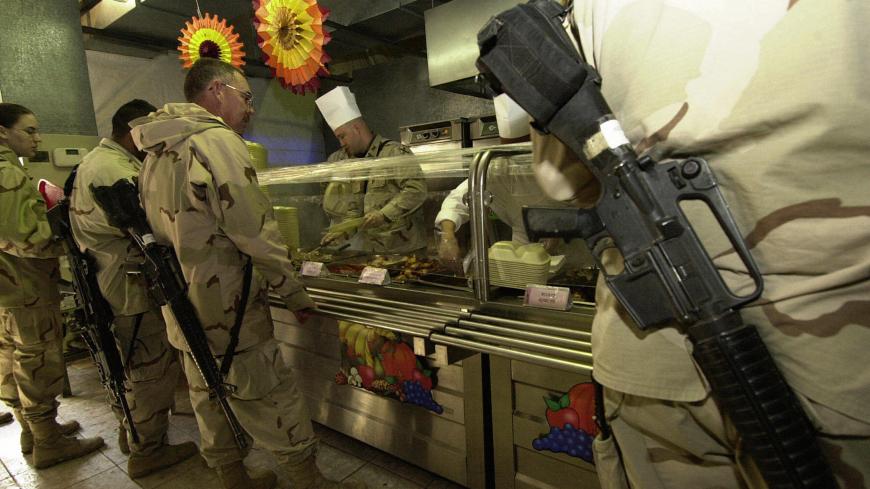 A US officer from the 1st Brigade, 25th Infantry Division (Stryker Brigade Combat Team) serves turkey for soldiers lining up for a traditional Thanksgiving meal at a dining room in a US base in the northern Iraqi city of Mosul, Nov. 25, 2004. - GETTY/Tauseef Mustafa

The US military is using more than 5,500 contractors in the campaign to defeat the Islamic State (IS) in Syria and Iraq, the Pentagon revealed in a quarterly report this week that acknowledges the use of contractors in the Syrian war zone for the first time.

The latest figures from US Central Command indicate that 5,508 US and foreign contractors are working alongside US troops in the two combat zones. That’s an increase of 581, or 12%, over January’s numbers, which did not include Syria. About half of the contractors are US citizens, while the rest are local or third-country hires.

The disclosure comes as President Donald Trump has signaled his desire to pull US troops out of Syria “very soon” after the end of the counter-IS mission. The role of contractors in Syria is also under increasing scrutiny after hundreds of Russian contractors died in a battle with US troops and the Kurdish-led Syrian Democratic Forces in the oil-rich Deir ez-Zor province, as CIA Director and Secretary of State-designate Mike Pompeo publicly confirmed in his Senate confirmation hearing April 12.

Unlike the Russians, however, the US contractors are mostly focused on supporting the 2,000 US troops in Syria by delivering hot meals, gasoline and other supplies. More than 30% of them support logistics and maintenance, according to the quarterly Pentagon report, and another 27% help with support and construction of US military outposts in the region.

“It’s not the Russian contractor role in Syria, which is … deploying tactical military units of squad company size,” said Peter Singer, a senior fellow and strategist at the New America think tank in Washington. “It’s the old stuff that Halliburton used to do.”

More than 400 “security” contractors are also involved in the fight in both countries, but “you’re not seeing the 163rd private US military group invading a city in Syria,” Singer said. Russian military contractors are also helping to protect oil fields across the country, protecting an industry that represented a quarter of Syria’s government revenue in 2010.

Though previous Defense Department personnel reports in the region hadn’t mentioned a Pentagon contractor presence in Syria, the US Department of Labor acknowledged in a report last year that two contractors were killed and six injured in fiscal year 2017. The Pentagon numbers don’t represent contractors working for other US agencies, such as the State Department, which assists with demining.

The Pentagon’s admission comes after an awkward back-and-forth between Trump and his top military and diplomatic advisers at a National Security Council meeting last week. While the president wants to declare victory on IS and pull out, the Pentagon has asked the commander-in-chief to leave US forces in Syria to prevent insurgent cells from regrouping along Syria’s border with Iraq.

Gen. Joseph Votel, the head of US Central Command, said at a public event last week, “The hard part is in front of us” in the war-torn country. Less than a mile away at the White House, Trump appeared to contradict US pledges to stay in the Syria fight at an open Cabinet meeting after long expressing his frustration over US military spending in the Middle East. The White House also recently announced a $200 million cut in funds earmarked for stabilizing Syria.

Despite their nonkinetic role, some experts say contractors face many of the same dangers as the US troops and Syrian forces who battled Russian mercenaries in February. With IS on the run and multiple US antagonists ready to push out the United States and its allies, civilian personnel risk getting caught in the crossfire.

“I would give America a six-month honeymoon here,” said Joshua Landis, the director of the University of Oklahoma’s Center for Middle East Studies. “Turkey, Syria and Iran are just sitting there, waiting to stick shivs in us.”