How an anti-waste challenge went viral in Iran

A campaign to get ordinary people involved in devising solutions to Iran's growing waste problem has gone viral. 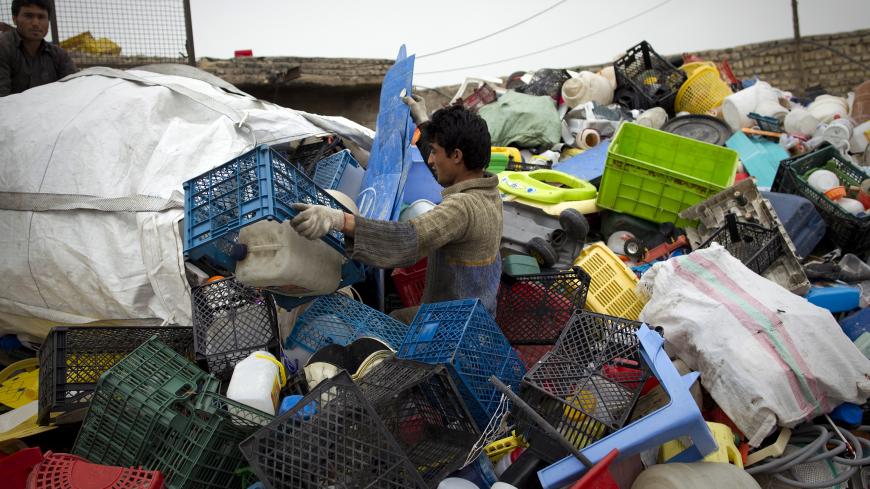 Waste collection costs the country some 370 trillion rials (nearly $8.8 billion) alone, excluding the damage it inflicts on the environment and public health.

In December, mindful of these worrisome figures, the country's poor waste management system and a low recycling rate of about 8%, Kaveh Madani, then deputy head of the Iranian Department of Environment's Organization for Education and Research, launched the "Bi-Zobaleh" ("No Waste") challenge on social media to invite and encourage ordinary Iranians to take action. (Madani recently resigned after reported hard-liner pressures).

"One of Iran's problems is that we as Iranians believe we have no impact. This belief is hurting us; why don't we understand that we can have an impact and that in society, all individuals can together have an impact through small things?" Madani told Al-Monitor in a lengthy interview prior to resigning from his high-profile position.

"We have a mix of environmental problems in Iran. If we just talk about them and do not have any strategies, we won't be able to solve any of the issues. Thus, we decided to have a theme for each season at our own [section of the department]. We chose waste for the winter season because individuals can have a significant role in it compared with other environmental issues," he added.

Explaining that the challenge to invite Iranians to reduce waste production was started with the slogan “az_khodeman_shoro_konim” ("Let’s_start_with_ourselves" in Persian) through a video, the young scientist, who is known as a game theory expert, added, "It all started with a video post of myself taking part in a cleaning event in [the northern Iranian province of] Gilan where I suggested that if there is anything to be done about the environment, we have to remember that we must start with ourselves. I then invited four people: [presidential adviser] Shahindokht Mowlaverdi, [actress] Mitra Hajjar, [member of parliament] Tayyebe Siavoshi and [soccer player turned actor] Pejman Jamshidi to this challenge to explain what they would do to reduce waste."

Later, many other officials — including several Cabinet ministers and parliament members — as well as activists and celebrities joined the challenge and invited others to take part. Now, nearly four months later, Madani told Al-Monitor that the campaign has gone viral, with many Iranians from all walks of life and a wide range of ages taking part.

While the challenge is to get Iranians to explain what actions they are taking or are willing to take to reduce waste, one might ask what the officials at the Department of Environment have done themselves in this regard?

"We could not ask people to do something without ourselves taking any action. So banning bottled water in all [departmental] offices across the country was one of the first measures we took. The measure at this scale was unprecedented in the world," Madani explained.

Conducting all sorts of cleaning events across Iran was also part of the steps that Madani and his departmental colleagues took part in. "In the campaign, our first purpose is to increase the sensitivity of society toward waste and to realize that waste is a serious issue that we’re not paying enough attention to," Madani said.

"There are a lot of things we as government officials talk about in our meetings but there are many things we don't know. So we are learning a lot from the videos that people are sending us. We're learning what big measures can be done through simple things that people are doing," he said.

To enter the challenge, a person must record a one-minute video to explain what action he or she is taking to reduce waste and invite four other people to take part in the challenge on social media using the "bi_zobaleh" hashtag.

"We've received thousands of videos and we continue to do so as the challenge continues. From the many good samples we receive, we collect the best ones and promote them on social media so that other people can learn about simple actions to protect the environment," Madani said.

But where did the idea of designing such a challenge came from? Madani told Al-Monitor, "As a game theory expert, I always thought about creating a game about one of the environmental issues. The fun part of the game makes it more interesting. This challenge is very unique and has not been copied from anywhere. The good thing about this game is that whoever takes part in it will have to take a real action in this regard. This challenge started from Iran, but it is going viral and we're getting videos from the US, Canada, Japan and many other places," he said.

Saying that "we as government didn’t do much except for designing the game and shooting the first video," Madani is hopeful that the challenge leads to greater public awareness about waste.

Speaking passionately about the challenge throughout the interview, he concluded by saying, "We usually look after others and try to copy from what others do to protect their environment, but this time we've initiated a challenge and hope that we can be an exporter of a major environmental behavior challenge in the world."

Not long after the interview, Madani resigned while abroad in the face of increasing pressures from hard-liners in connection with the arrests of a group of Iranian environmentalists.