The latest initiative to encourage households to sort waste has been unsuccessful due to mismanagement at the government level. 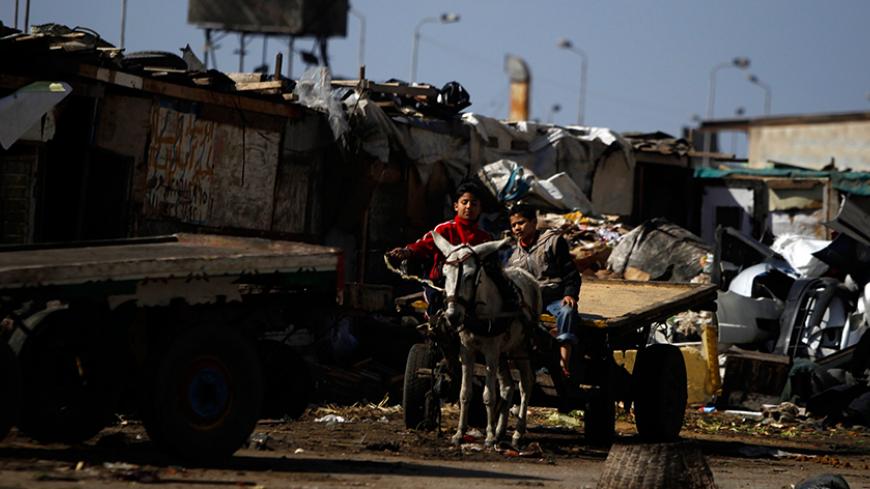 Boys sit on a donkey cart at a recycling site in the city of Port Said, northeast of Cairo, Feb. 2, 2013. - REUTERS/Amr Abdallah Dalsh

CAIRO — The Egyptian state has launched many initiatives since 2013, many of which have faced obstacles and were halted, or have become useless and only served the successive governments by grabbing the media's attention.

This certainly applies to the "Waste Sorting at the Source" initiative, as confirmed to Al-Monitor by sources within the waste collection companies that are part of it. The initiative was launched on March 8, 2014, by the Ministry of Environment to raise awareness among citizens of the need to separate organic waste, which can be used in the production of fertilizer and energy, and solid waste that can be recycled.

The initiative to sort waste also aims to facilitate the recycling attempts by some companies and government-run factories, which have often failed. In Egypt, 27 million tons of waste is produced annually, of which only 90 tons is recycled.

The Ministry of Environment and Ministry of Urban Renewal designed the initiative to establish a firm system for waste collection by contracting companies owned and established by youths in every neighborhood or residential area in the country, and by involving environmental civil society organizations to provide waste-collection services to households.

The initiative would prevent waste from accumulating in the streets, and also facilitate its transfer to the state’s waste treatment facilities before being reclassified in landfills as either solid waste or organic waste.

Former Prime Minister Ibrahim Mehleb and former Environment Minister Laila Iskandar launched the initiative during a tour of Giza governorate. It was subsequently implemented in a number of neighborhoods in the governorates of Cairo, Qalyubia, Port Said and Alexandria. Its implementation in the Sinai Peninsula was announced on Oct. 17, 2015.

Mismanagement was the first problem facing the initiative. Mubarak told Al-Monitor that Iskandar supported the initiative from the get-go. On June 17, 2014, and before holding the post of minister, she took part with various civil society organizations in a number of workshops on the importance of waste sorting at the source, as a first step in the establishment of an effective system for waste management in Egypt.

A. H., one of the founders of a company taking part in the initiative told Al-Monitor on condition only his initials be used that at first Mehleb was interested in the initiative, but as his supervision decreased due to terrorist acts and political unrest, a lack of management prevailed. The responsibilities were distributed between the Ministry of Environment and the Ministry of Urban Renewal, which placed advertisements in April 2015 to promote the initiative, under the slogan “Sort.”

Al-Monitor tried multiple times to contact Hani Younis, spokesman for the Ministry of Housing, but he did not answer calls.

Mubarak said that the ads, including the “Sort” slogan, were not enough to promote the initiative to the public. He told Al-Monitor, “The relationship between the families and the rubbish collectors who have been collecting their garbage for decades is well established. This could be an obstacle to the companies that sought to collect waste from the houses as part of the initiative. We should have made home visits and held discussions with the public on the importance of waste sorting — which the garbage collectors have never required them to do during many years of collecting garbage — and not just rely on TV ads. I also wished there had been competitions to select and honor the households and the streets in every neighborhood that responded the most to the initiative, in order for them to be a role model for others. This is in addition to other ideas that could have led to a greater response to the campaign and conviction about its objectives.”

Mubarak added, “Apart from mismanagement and poor promotion of the initiative, we have faced operational problems. I have taken part in the initiative three times since it was launched in March 2014, and each time my participation lasted for three months. We have constantly faced problems, such as the lack of waste collection vehicles that were provided by some companies taking part in the initiative. The Environment Ministry promised to provide handling facilities close to the residential areas in which we operate in order to collect the waste and then transport it to factories for recycling or to landfills. It also promised to provide containers to separate organic waste from solid waste. The promises were repeatedly made but never fulfilled.”

Mubarak concluded, “In addition to all of the obstacles, there were financial problems that prevented us from carrying on with the initiative. We only received the financial dues from the state, after more than a six-month delay, which caused 26 out of 54 companies to withdraw, and it seems the required budget was not available for the initiative.”

For his part, A. H. said, “The initiative’s budget was not spent properly. The civil society organizations received 10% of the budget to make visits to the neighborhoods that were targeted by the initiative and hold some workshops on waste sorting at the source. All financial obstacles could have been circumvented by making agreements with local and international recycling companies and factories that buy solid waste from garbage collectors. The agreements would have allowed these companies to buy the solid waste directly from the companies participating in the initiative, at prices lower than the ones paid to garbage collectors.”

He added, “Also, these companies could have paid each household partaking in the waste sorting initiative a certain amount of the profits made by buying solid waste. This plan would have encouraged households and would have led to a rise in the volume of recycled waste."

This plan seems a possible solution for some of the problems facing the initiative, but the whole thing may well be just a "media spectacle."