While a large amount of hard currency has left Iran in the years since the implementation of the nuclear deal, the picture is more complex than a simple case of investors rushing to move their capital outside the country. 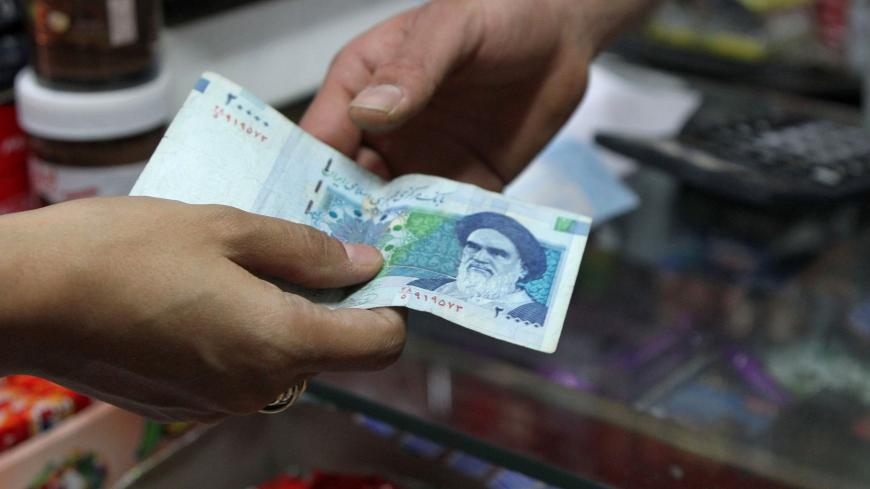 An Iranian woman pays a grocer in Tehran with a 20,000 rial banknote bearing a portrait of the late founder of the Islamic Republic, Ayatollah Ruhollah Khomeini, Sept. 30, 2012. - ATTA KENARE/AFP/GettyImages

A prominent Iranian member of parliament's recent statement about a significant outflow of capital from the country has raised eyebrows. Commenting on the foreign exchange fluctuations in March, parliamentary economic commission head Mohammadreza Pourebrahimi said some $30 billion of capital had fled Iran in the final months of the last Iranian year, which ended March 20. To assess such a phenomenon, it is necessary to grasp the parameters that lead to capital flight and their impact on the Iranian economy.

Within a theoretical framework, there are several key causes of capital flight in national economies: exchange rate misalignment; political and economic instability; general policy shortcomings in the protection of investments; financial and capital account deficits; corruption; and major foreign debt. With the exception of foreign debt, the current state of the Iranian economy offers all of the above, and these factors, especially political instability and corruption, can motivate economic players to move their capital abroad. However, one needs to be careful with classification of all flows in Iran as “capital flight.”

Though the mentioned $30 billion capital outflow cannot be deducted from official data, one can identify an overall pattern in the Central Bank of Iran’s data on net capital account deficit. According to Central Bank of Iran data, in 1395 (the year ending March 20, 2017) there was a net capital account deficit of $18.3 billion and in the first six months of 1396 a deficit of $6.3 billion. These are high figures considering that in previous years, the country had a positive net capital account balance. As such, it seems that capital flows have gone in the wrong direction after the implementation of the Joint Comprehensive Plan of Action in January 2016. But why?

The first fact to consider is the push toward transparency in how statistics are captured, processed and presented. It has been established that past and present statistics fail to reflect some of the facts about the shadier aspects of the Iranian economy. Indeed, according to Shargh Daily, during the presidency of Mahmoud Ahmadinejad (2005-2013), some $100 billion to $200 billion of “dirty money” fled the country. Some of these funds, such as the $3 billion embezzlement case in Bank Melli, became very public. All signs are that the flight of capital that has been accumulated through corrupt practices — that is, via smuggling, sanctions busting, administrative or financial corruption — is still prevalent in Iran, though the real volume of such capital flight is very difficult to gauge. In many cases, such funds flow in other forms, such as gold — a phenomenon that explains why Iran remains a large market for gold, despite the gradual normalization of banking relations. Another form of shifting capital outside the economy is in exports, where the financial proceeds never return to Iran. This has compelled the government to consider the reintroduction of “financial guarantees” to be signed by exporters.

Another aspect to understanding the mechanism and volume of capital flows is the movement of funds within the existing hawala system in Iran. This system is used by foreign exchange bureaus and relies on parallel flows of funds through a trustee system. In essence, when a transaction happens through the hawala system, initially no money flows across borders. This means that at some point in the process, funds have to actually flow across borders to correct the balance of payments. Consequently, some of the capital movements that seemingly look like capital flight are just corrections to balance the flow of payments.

Past sanctions on Iran consolidated the hawala system as a main platform for transactions — a fact that needs to be understood in the current fluctuations in the currency market. For example, First Vice President Eshaq Jahangiri once commented that “under the previous [Ahmadinejad] government, within 18 months, some $22 billion left the Iranian economy under the pretext that they wished to sell hard currency in Dubai and Istanbul to control the domestic exchange rate.” Such capital movements happen in both directions and they are neither foreign investment nor capital flight — rather, they serve to balance the credits and debits of foreign exchange bureaus in a time-lagged manner.

Evidently, the Hassan Rouhani administration had hoped that a normalization of banking relations would make the financial flows more transparent and also reduce the need for the wide-ranging operation of foreign exchange bureaus. However, continued bottlenecks in the banking sector, in addition to domestic and foreign restrictions and a flawed two-tiered exchange rate system, have rendered the interaction of the Iranian economy with the global financial sector into a very opaque and complex structure.

In addition to the opaque structure, one also needs to appreciate the reasons why, at the current juncture, economic players in Iran wish to move some of their capital outside the country. The most obvious ones are economic and political uncertainties due to domestic and external unpredictability. At the same time, some merchants and businesses will opt to keep some funds outside Iran to facilitate their future imports. Furthermore, many importers in Iran have no choice but to prepay for their imports, which means that as long as banking relations are not normalized, funds will leave the Iranian economy before goods enter, so an imbalance in transactions would be acceptable. Another Iran-specific reason is the fact that many companies had previous debts from the sanctions years that they have settled in the meantime, that is, an abnormally high outflow of funds to balance old debts that accumulated during the sanctions years.

Looking beyond commercial transactions, private citizens also contribute to the current imbalance. Evidently, concern about future economic development and a desire to hedge investments have compelled many citizens to look for investment opportunities abroad. This trend has been amplified by the desire of middle-class families to have a second residence outside Iran, preferably in Western countries. Many European jurisdictions have started offering financial schemes, such as property or commercial investments, as a basis for immigration. It is very difficult to gauge the precise volume of such transactions, but it can be reasonably assumed that large amounts of foreign currency have fled the country to serve as a basis for this form of migration.

Though the motivations for capital flight are diverse, it remains a damaging phenomenon in the Iranian economy. Economist Abbas Hoshi blames the dominance of the governmental and semi-governmental sector as the main reason and believes that the restrictions on private sector investment lead to capital flight. According to Aliollah Hamedani, adviser to the Association of Industrial Managers, one of the reasons for capital flight is the weak business climate that has turned companies into “welfare organizations” rather than profit-making enterprises. Consequently, Iran needs a concerted effort to improve the business climate, including a unification of the dual exchange rates as an important step in reducing the potential of corruption in dealing with foreign currencies. While the government’s April 9 announcement that it has unified the rates closes one of the main platforms for corrupt practices, it needs to make hard currency available at the unified rate. Otherwise there will be a black market and a lot of anxieties among economic players.

There is no doubt that the negative capital account balance will undermine Iran’s economic plans. The country is in need of domestic and foreign investment, but is experiencing capital flight. The sad fact remains that strong political forces are opposed to the country’s modernization and development and hence interested in causing capital flight, both in terms of financial capital as well as human capital.