Turkish manufacturers see “great injustice” in Washington’s new steel tariffs, as Ankara seeks compromise on the issue amid the tense political climate between the two countries. 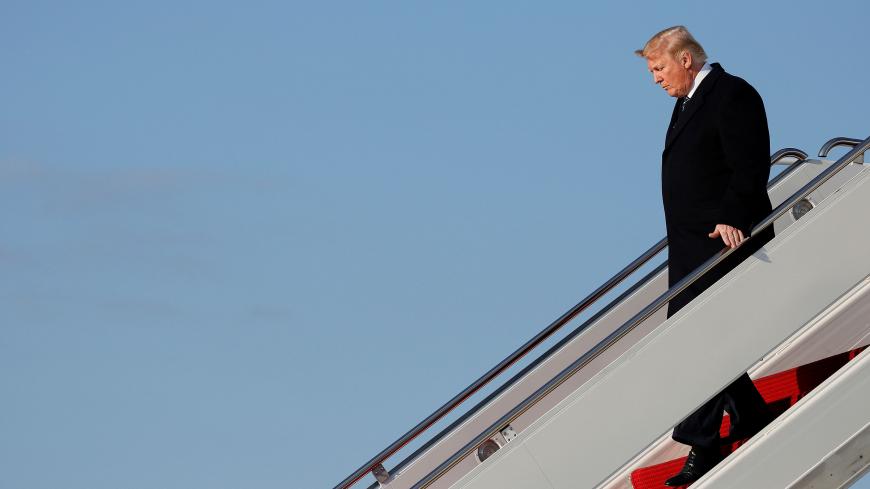 US President Donald Trump walks from Air Force One as he returns from Palm Beach, Florida, at Joint Base Andrews in Maryland, March 25, 2018. - REUTERS/Joshua Roberts

US President Donald Trump’s decision to impose stiff tariffs on steel and aluminum imports has added a new item to the long list of problems between Turkey and the United States. Turkish manufacturers failed to duck the new tariffs that were proclaimed March 8, even though the head of the American Institute for International Steel, John Foster, had sent Trump a letter praising Turkey’s “fairly priced and high-quality steel” and urging exemption for Turkish mills.

Trump’s move involved a 25% levy on steel and 10% levy on aluminum, which the president defended as a means of protecting national security. Shortly before signing the tariffs, he pledged “great flexibility” for countries that “are real friends and treat us fairly on both trade and the military.” The initial exemptions covered Canada and Mexico, but their continuation depends partly on progress in negotiations to update the North American Free Trade Agreement, according to US officials.

Namik Ekinci, the head of Turkey’s Steel Exporters Association, believes Trump has dealt “great injustice” to Turkish manufacturers. In an interview with Al-Monitor, he explained that Turkish industries bought some 3.8 million tons of scrap steel from the United States annually and exported it back after processing, mostly as construction steel. “This poses no threat to US national security,” he said. “The United States showed great injustice and negative discrimination toward Turkey under this pretext.”

Discriminating between countries on tariffs is “unacceptable,” Ekinci said. “The exemptions granted to Canada and Mexico will push Turkey out of the game as long as this measure remains in place. This will also open a wound in US-Turkish ties that will be difficult to heal,” he said.

In remarks to Al-Monitor, Aslan pointed out that Turkey’s annual imports of US cotton amounted to $519 million, roughly the equivalent of its $525 million exports of angular iron rods to the United States. “Let’s execute [the principle of] reciprocity in the realm of trade as well. Let’s impose tariffs on cotton imports at least, or we could impose tariffs also on the import of aircraft materials,” he said. According to Aslan, who sits on parliament’s Industry, Trade and Energy Commission, US cotton could be replaced with cotton from India, Egypt, Pakistan and even neighboring Greece. Turkey must draw up a “plan B” to protect itself, he stressed.

The balance in bilateral trade is currently in favor of the United States. Last year, Turkey’s exports to the United States amounted to some $8.6 billion, while its imports stood at about $11.9 billion. Turkey might retaliate by imposing tariffs on an array of US products should the Economy Ministry’s efforts at compromise fail. Cotton and technological products appear to be first in line.

Trump’s tariffs came at a time when Turkish sales to the United States were already on the decline, despite an increase in the country’s overall steel exports. According to figures by the Steel Exporters Association, Turkey’s overall steel exports stood at 3.2 million tons in the first two months of the year, a 1.3% increase from the same period in 2017. Though Trump’s new levies took effect in March, anticipation of the move led to a 60% decrease in steel exports to the United States in the January-February period. Turkish producers seem to have already turned to European markets to make up for the decline. Steel exports to European Union countries increased 62% to reach 1.3 million tons in the same period.

Turkey’s discontent with the new tariffs is obvious, but Washington’s decision is still seen as “the lesser of evils” because the worst-case scenario of Turkish steel exporters involved a 53% levy. The sales of steel products to the United States will continue, but the tariffs have already pushed prices up by 8-15%.

Should the price increases accelerate, those exporting steel to the United States could soon catch up with their old revenue levels despite selling smaller amounts. Ultimately, American industrialists could emerge as the prime victim, calling into question the protective effect of raising tariffs.