Death sentences imposed by an Iraqi court on Turkish women affiliated with the Islamic State has put Turkey in a difficult spot with its stance on terrorism and puts a brake on what appeared to be improving relations with Baghdad. 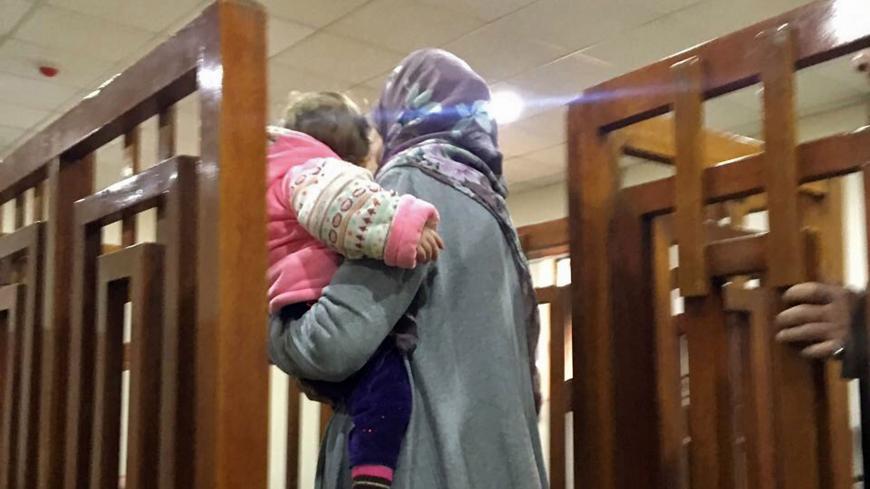 Melina Bougedir, who was arrested last summer in the former Islamic State stronghold of Mosul, carries her son as she arrives in court in Baghdad, Feb. 19, 2018. Bougedir's three other children, who were with her when she was arrested, have been repatriated to France. - STRINGER/AFP/Getty Images

Relations between Turkey and Iraq had been improving somewhat, with the countries even discussing a joint military operation against Kurdish militants in Iraq. That goodwill is being threatened, however, by the severe sentences Iraq is imposing on Turkish women for involvement with the Islamic State (IS).

When Turkey and Iraq adopted a joint position opposing September's independence referendum in Iraqi Kurdistan, it appeared that they had smoothed over some of the tensions between them. With the Baghdad government having taken control of Kirkuk from the Kurds, Turkey has come to view as vitally important a new pipeline project to bypass Iraqi Kurdistan and the opening of a new major border crossing at Ovakoy as an alternative to the Habur crossing, which the Kurdistan Regional Government (KRG) controls. Ankara is also advocating joint operations against the Kurdistan Workers Party (PKK) in the Qandil Mountains and Sinjar. A recent exchange of visits by the Iraqi and Turkish military chiefs of staff was seen as a possible prelude to such a campaign.

Despite these possible steps forward, Ankara and Baghdad face a renewed strain in relations. The latest headache began when Iraq announced on Feb. 25 that its courts had sentenced more than a dozen Turkish women to death and 10 others to life imprisonment. Despite Turkey's expressed concerns about the women, Baghdad — riding high after forcing IS from Mosul, recovering disputed areas from the KRG and preparing for general elections in May — is apparently in no mood to make concessions simply to please Ankara.

“The convicted women had confessed during the investigation [to joining] IS, marrying IS members and providing logistical aid to the group,” said Abdul Sattar al-Birakdar, the High Judicial Council spokesman.

After Mosul was liberated, Iraq announced that it had detained more than 500 European women related to IS members. Turkish sources estimated that 300-400 of them are probably Turkish citizens. Although firm figures are not available, an estimated 200 children belonging to these women are also believed to be in detention centers.

Following Birakdar's announcement, the Turkish Embassy in Baghdad approached the Iraqi Justice Ministry for details to assess the detainees' legal rights and try somehow to stop the executions, as well as prevent the issue from damaging bilateral relations. Turkey is also annoyed in part because, it claims, Iraq has avoided addressing the issue at an official level and instead is discussing it through the media.

Turkish officials are worried about a deterioration in relations and say they are being dragged into a dilemma: If Ankara makes a strong case for its citizens, it will be perceived as supporting IS. If it does nothing, it will be accused of not caring about the welfare of the women. That might explain why Turkey has decided to deal with the issue discreetly. Information provided by sources who spoke with Al-Monitor on condition of anonymity explained the difficult position Turkey is in.

Iraqi officials have not shared information with Turkey or officially informed it of the court’s rulings. Ankara only knows the names of the women, some of them obtained from petitions filed with Turkish offices by the women's relatives. Other names were learned from relatives who traveled to Baghdad and contacted the Turkish Embassy there.

Turkish officials told the Iraqi Justice Ministry that it was unfortunate that the court decisions were issued just as relations were improving. The officials also met with Birakdar, who is a Turkmen. As an appeals process proceeds, diplomatic contacts will continue and alternatives will be probed, such as allowing the women to serve their sentences in Turkey.

What is transpiring is not a simple matter of justice. As Iraq's national elections approach, Iraqi Prime Minister Haider al-Abadi's government wants to use the cases to show that it is continuing the struggle against IS in every arena, without hesitation. A Turkish government source closely following developments spoke to Al-Monitor about the convictions and other issues.

“There are some people who are trying to associate Turkey with IS,” the source said. “They want to drag us into that quagmire. We don’t want Turkey to be accused of supporting terrorists, but we also have the responsibility of ensuring fair and transparent trials for our citizens. We don’t want this issue to escalate, as it could have disastrous consequences. We are worried about it, while we are also trying hard to improve relations with Baghdad.”

In October, Turkish Prime Minister Binali Yildirim postponed a visit to Baghdad at the last minute. In December, Turkish Chief of the General Staff Hulusi Akar hosted the US commander of forces in Europe, Gen. Curtis Scaparrotti, CENTCOM Commander Joseph L. Votel and Iraqi Joint Forces Chief of Staff Gen. Othman al-Ghanimi. Akar himself went to Baghdad on Feb. 1. According to information reaching Al-Monitor, no agreement was reached on any of the issues between the two countries during the meetings.

“Baghdad doesn’t feel inclined to [conduct] a joint operation at [Sinjar],” the source added. “We could have some cooperation in security matters, but there is no likelihood of joint operations.” At a March 8 news conference, however, Turkish Foreign Minister Mevlut Cavusoglu said that some kind of joint steps are planned for after the Iraqi elections.

“Opening a new border crossing at Ovakoy and building a new oil pipeline from Kirkuk to Turkey’s Ceyhan oil terminal will have to wait for the outcome of bargaining between the Iraqi government and the KRG,” the source said. “To normalize relations with the KRG, Baghdad demands full control at borders and the airport. Abadi doesn’t want to be seen making concessions to the Kurds and is likely to stall negotiations until the elections. Of course, their not reaching a deal affects Turkey’s projects as well. The new pipeline will take at least one year to build. The old pipeline is beyond repair. We simply don’t expect Abadi to make any drastic moves before the elections.”

Ankara realizes in general that it has to wait until after the Iraqi elections to resolve outstanding issues with Baghdad and hopes that in the meantime nothing critical — in particular, executions of the Turkish women — will transpire.