Some 40 million Turks ruled by appointed, not elected, mayors

Institutions, including private ones, whose officials were once elected are being taken over by government-appointed trustees in the president's ever-expanding arena of influence. 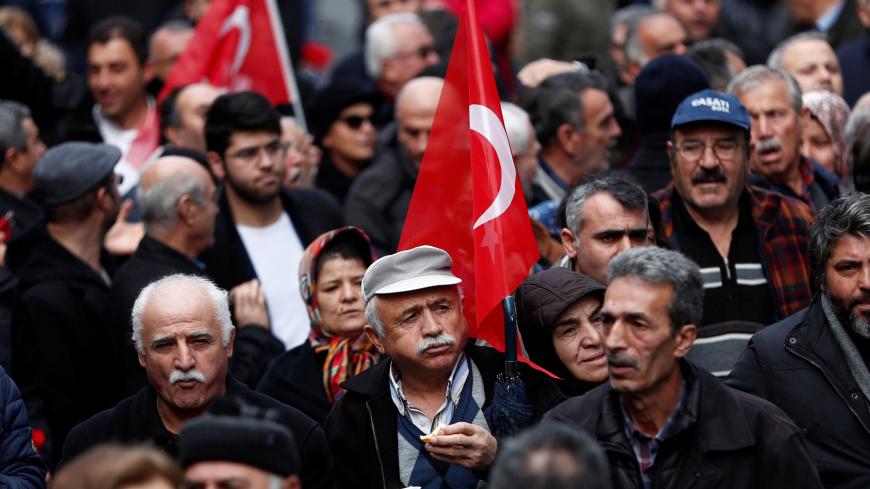 Turks are bitterly joking that they are now living in “Kayyumistan” or the “Land of Trustees.” The government is expanding its monopoly by appointing cherry-picked trustees to replace the elected ones. By legal and practical definition, a trustee (kayyum) in Turkey is the person appointed by the government to manage institutions, usually publicly traded commercial entities, where corruption and abuses take place, until a new management is in place. But with the state of emergency — declared after the July 2016 failed coup attempt, and still in place today — the trusteeship system has expanded to cover municipal, cultural and religious institutions.

This process began Sept. 11, 2016, with the removal of more than 90 mayors out of 102 elected pro-Kurdish Peoples’ Democratic Party (HDP) mayors. This was the first step toward eliminating the HDP, which President Recep Tayyip Erdogan believes has hindered his ambitions. The second phase of the same operation involved detaining more than 10,000 HDP officials and members.

The trustee storms also hit the main opposition Republican People's Party (CHP) and even the ruling Justice and Development Party (AKP). A number of mayors, including those of Istanbul and the capital, Ankara — whom Erdogan did not want to work with in the lead-up to the elections — have been replaced. Half of Turkey’s population of more than 80 million people are now living in cities managed not by elected, but appointed, mayors.

The main target of the trustee system in the private sphere is cleric Fethullah Gulen. Turkey is seeking his extradition from the United States as Erdogan's primary suspect in the failed coup. As of January, the management of private companies accused of being affiliated with the Gulen movement had been taken over by government-appointed trustees. Moreover, the assets of 200 of these companies were confiscated by the Savings Deposits Insurance Fund.

In the religious domain, trusteeship showed itself by intervening in the election of the patriarch of the Armenian community of Turkey. When the patriarch wasn't able to continue because of illness, the government replaced him in 2010 with an appointed, rather than elected, patriarch who then declined to relinquish the position. When the public finally was able to hold an election, in March 2017, the "acting patriarch," senior Bishop Aram Ateshian, lost. He left the election hall in a huff, but returned minutes later with a faxed letter from Istanbul saying that the election was not legitimate and that Ateshian would continue as patriarch. People then realized the message had actually been written before the election even took place.

Yetvart Danzikyan, editor-in-chief of the Armenian daily newspaper Agos, criticized this interference. “Does the state know how to elect a patriarch better than we do? The procedure is this: When there is no patriarch a new one is elected by the people. We cannot live with someone called acting patriarch for years just because the state wants it that way,” he said in Cumhuriyet daily.

This crisis at the Armenian Patriarchate has yet to be resolved.

Another striking example of appointing trustees occurred March 5. The Ministry of Culture took advantage of an internal debate in MESAM, the professional organization of musicians, and appointed people loyal to the ministry to the executive council.

Orhan Gencebay, a big name in Turkish music who was chairman of MESAM — which was established to protect the copyrights of singers, composers, arrangers and distributors — resigned after accusing the organization of not being transparent. He was replaced by another big name in Turkish popular music, Arif Sag, a former MESAM chairman. The ministry reacted by appointing a new board led by folk singer Yavuz Bingol, known to be close to Erdogan. The council board members who were ousted said their organization had been regularly monitored by ministry inspectors who did not find anything irregular and denounced the decision as illegal. Bingol, who resented being called a "trustee" and "the palace’s man," announced he wouldn't take the post.

Cem Erciyes, the culture and arts writer for website Gazete Duvar, said MESAM, which has some 9,000 members, is the most successful professional organization of the culture industry and works diligently and successfully to protect the rights of its members. “This is beyond the regular arguments that arise from the nature of MESAM," he told Al-Monitor. "It is a threat to the democratic existence of civil society organizations. It is very unpleasant for the Ministry of Culture to suddenly remove the former administration — accused of being Alevis [a sect of Islam] and leftists — and to replace them with names all known to be close to Erdogan. This is similar to restrictions placed on other professional organizations such as the Union of Medical Doctors and the Union of Bar Associations."

What changes can be expected under trustee mayors? First, platforms that could provide opposition to the government are being eliminated one by one and put under the control of one man. Examples of overriding the people’s will are best seen in municipalities entrusted to appointed civil servants. Look at what happened in HDP-run municipalities. Assets worth millions of dollars are changing hands. In some cases, where mayors were replaced with appointees, more than 90 HDP mayors were detained and 70 are still in prison.

Second, four provinces and towns terminated cultural and art programs. All signs in Kurdish, Syriac, Armenian and Arabic were removed. Many statues of joint Turkish-Kurdish legacies of the society were removed. The names of many parks were changed, including the one named after the late chairman of the Diyarbakir Bar Association, Tahir Elci, who was assassinated in November 2015. Nuda Cultural Center in Van was closed down, and 21 festivals were canceled. All cultural centers offering training in music, theater and cinema were closed. Kindergartens that were offering education in Kurdish were turned into religious seminaries and 20 women’s centers were closed.

This is not the full list of the mind-boggling performances of these trustees. What we are witnessing is Erdogan's goal of absolute control over not only the public sphere but also civilian life. All dismissals, detentions, appointments and the work of trustees are based on the lengthy state of emergency regime and government’s unchallenged rule of issuing decrees instead of enacting laws. This all makes legal challenges to that absolute one-man rule practically impossible.