The story behind Israel's secret strike on Syria's nuclear reactor

Israel for the first time acknowledges how nearly a decade ago it located and destroyed a Syrian nuclear reactor built with the assistance of North Korea. 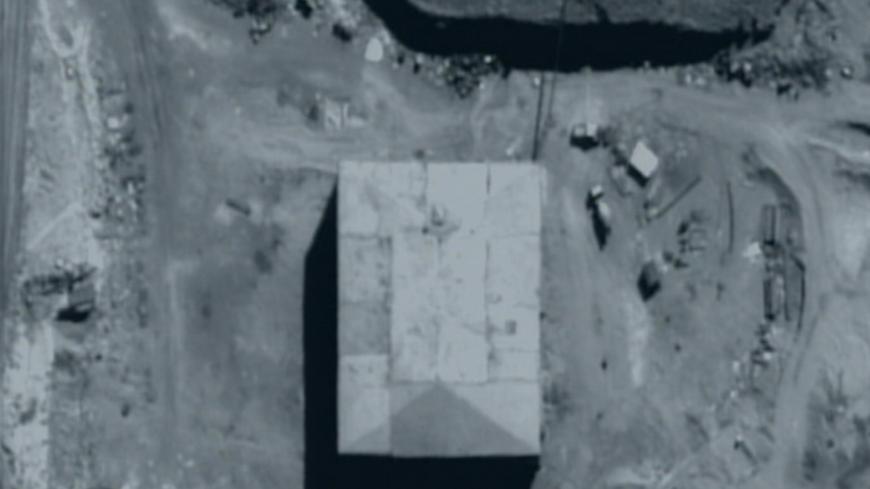 An undated image released by the US government shows the suspected Syrian nuclear reactor building under construction in Syria. The White House on April 24, 2008, broke its official silence on the mysterious Sept. 6, 2007, Israeli airstrike. - REUTERS/U.S. Government/Handout

Sometime in late 2006, US Director of National Intelligence John Negroponte visited Israel. According to a security source speaking on condition of anonymity, at a meeting with the heads of Israeli intelligence at Mossad headquarters in Tel Aviv, intelligence branch officers presented a small time bomb. On the margins of the discussion, dealing with various security analyses of Israel’s neighbors, Col. Eli Ben-Meir, head of the technological branch of army intelligence, said that according to his assessments the Syrians were working on an “unconventional weapons project.”

Amnon Sofrin, head of Mossad's intelligence branch, fumed. He had not authorized army intelligence officials to bring up the topic, because Mossad had concluded that there was no nuclear activity in Syria. Regardless, Ben-Meir had opened his presentation to Negroponte with three slides on nuclear activity in Syria. His assertions were explosive and controversial. Not only Mossad, but the Americans as well, headed by Negroponte, rejected the army intelligence assessment as unrealistic.

Ben-Meir had illustrated his presentation with dark clouds and called the situation “a nuclear cloud.” Negroponte expressed his disagreement with him: I’m an expert on everything involving North Korea, he said, and it can’t be that the North Koreans are creating a nuclear reactor in Syria under our radar. That’s not possible.

At that stage, Ben-Meir was viewed as foolish, as hallucinating. Hard and unequivocal evidence for his extraordinary assertion that Syrian President Bashar al-Assad was secretly building a plutogenic nuclear reactor in the heart of the Syrian Desert was yet to be found. Ben-Meir knew that he was right, but he was unable to prove it. He also knew that North Korea was behind the secret project, which threatened to change the face of the Middle East within a year.

The story of the identification and destruction of the reactor was declassified by the Israeli army on March 21, a little more than a decade after the fact. It is yet to be determined whether the episode stands more as a grave security failure on the part of Israel and the United States, supposedly tracking nuclear exports from North Korea, or a dazzling Israeli success, executed with precision, by eliminating the Syrian nuclear threat.

On the one hand, it is no less than astonishing that Assad was able to build an advanced plutogenic nuclear reactor, and was about to connect it to the Euphrates River, turning it into a “hot” reactor, under Israel’s nose. “We know about every ant marching on the Syrian Desert,” a very high-ranking Israeli security source told Al-Monitor on condition of anonymity. “We discovered this reactor at the last minute.” On the other hand, however, at the last minute, the reactor was ultimately found.

The intelligence branch of the Israel Defense Forces (IDF) had “smelled” something. An enormous concrete block in the heart of the Syrian Desert near Deir ez-Zor had been located, photographed and checked out in 2005. Mossad teams executed missions to gather intelligence, but found nothing. This didn’t placate army intelligence, however, so they asked Mossad to make “one more try.” Mossad chief Meir Dagan was not thrilled. The agency was busy with other missions, and there were no experienced human resources available. In the end, Dagan agreed to give it another go, even though he didn’t think there was any point to it.

Investigative reporting published in the September 2012 issue of The New Yorker claims that Mossad agents broke into the personal computer of Ibrahim Othman, head of the Syrian Atomic Energy Commission, while he was in Vienna. Color photographs of the core of the Syrian plutogenic reactor were allegedly stolen from his computer. They pointed to widespread North Korean involvement in the building of the reactor.

The seized material sat at Mossad laboratories for a few days, because it wasn’t prioritized as urgent. No one at the agency believed they would find anything. Army intelligence sent someone to retrieve the material. When it was deciphered, it stunned everyone in Tel Aviv at army headquarters, the nerve center of the IDF. The material included detailed photographs, sketches and precise details of a plutogenic nuclear core.

IDF Chief of Staff Gabi Ashkenazi turned pale when he received the report from the chief of army intelligence, Gen. Amos Yadlin. Both men knew exactly what it meant: Assad was mere months from obtaining a plutonium bomb.

As to this episode representing a failure or a success, Gen. (ret.) Amos Gilad, former director of the Political-Military Affairs Bureau at the Israeli Defense Ministry, sees it as both. Israel's “Mr. Intelligence” told Al-Monitor, “It’s true that we could have discovered this reactor earlier, but the bottom line is that it was found, taken care of, successfully destroyed, and Israel managed to prevent the outbreak of a regional war. Thus the bottom line is completely positive, and everyone is right.”

Once the incriminating photos of the Syrian-Korean reactor got to Israel, one of the most sophisticated and successful military missions in the history of Israeli national security began. It was far more complicated than the 1981 attack on the Iraqi reactor, Operation Opera. The goal was to erase the Syrian reactor from the face of the earth without getting dragged into a bloody war with Assad, then at the height of his power. The civil war was several years away.

It turned out that hardly anyone in Syria knew that a plutonium nuclear reactor was being built deep in the desert. The only ones who did know were the president’s closest, most trusted associates, headed by Gen. Muhammad Suleiman, who was responsible for relations with North Korea. Suleiman would be killed in a targeted assassination at his summer home on Aug. 1, 2008, less than a year after the destruction of the reactor. Israel never claimed responsibility for the killing.

That hardly anyone in Syria knew about the secret project raised hopes in Israel that the reactor could be destroyed without sparking a war. Assad’s humiliation wouldn’t be public, because no one would know what exactly had happened. By the time events became clear, the situation would have cooled down. Prime Minister Ehud Olmert immediately ordered accelerated preparations to eliminate Syria's nuclear threat.

Ashkenazi established teams working under top secret cover. At the time, Israel was still recovering from the Second Lebanon War (2006). Its arsenals were depleted, and the IDF’s confidence was at a low point. Ashkenazi set out three aims: destroy the reactor, do the utmost to prevent a war and win decisively if war broke out.

The first mission was relatively easy. The intelligence operation had produced a large amount of information. Israel knew the precise location of the nuclear core buried under the concrete cover and exactly how many bombs would be needed to breach it and destroy the reactor. Ashkenazi told Al-Monitor in a recent interview, “It was important that the reactor be completely erased, so there would be no chance that it could be rebuilt.”

The big question was how to prevent a war. Olmert and the IDF leadership knew that Assad would still be capable of launching missiles after the strike against the reactor, a project on which he was relying to establish Syria's dominance in the Middle East in the next decade. To decrease the possibility, Israel settled on a “field of denial,” which would allow Assad to act as if nothing had happened. That hardly anyone in Syria knew about the reactor enabled implementation of such a strategy. The main condition was Israeli radio silence during the operation and after it. Israeli officials would not respond to questions about mysterious air activity over the Syrian Desert. Israel would completely ignore the event.

The special relationship and complete trust between Olmert and US President George W. Bush led Olmert to try to convince the Americans to execute the mission themselves. He failed. Except for Vice President Dick Cheney, every US official briefed on the matter opposed it. Bush suggested taking the information on the reactor to the UN Security Council. This alarmed Olmert. He knew that revealing the reactor and relying on diplomatic efforts would not be productive. Assad would never relinquish the instrument that would turn him into a regional nuclear power overnight. Bush also let Olmert know that he would not stand in his way. If Israel decided to carry out the operation by itself, the United States would back it.

In Washington on Sept. 4, 2007, a Fox News journalist submitted a query to the Mossad representative at the Israeli Embassy, asking about a Syrian nuclear reactor. Israel was alarmed. The whole affair was leaking; it would only be a matter of time before the story came out. It was decided to strike that night. The mission was executed before daylight on Sept. 5.

The military plan adopted was a “quiet” alternative suggested by Elazar Shakedi, commander of the Israeli air force. Another alternative would have guaranteed the complete destruction of the reactor but reduced the chances of keeping things quiet and radio silence. Olmert and Ashkenazi’s second condition, to prevent a war, would not have been fulfilled. For these reasons, they chose the quiet alternative, which entailed using eight planes. Seventeen tons of explosives in the form of precision bombs would be dropped on the exact location of the reactor’s core.

After the mission's successful completion, Olmert called Bush, who was visiting Australia. According to a security source who spoke on condition of anonymity, their conversation unfolded as follows: “Where are you?” Olmert asked. “Sydney,” Bush responded. “How’s Sydney? Beautiful?” asked Olmert. Bush was impatient. “So, prime minister, what did you want to tell me?”

The president knew that Israel had carried out the strike, but they couldn’t discuss this over the phone. “You remember that we talked about that thing in the north,” Olmert said. “I remember,” Bush replied. “So I wanted you to know that it no longer exists,” Olmert said. “What are the chances that there’ll be a reaction from the other side?” Bush asked. Olmert responded, “We estimate that chances are low.” Bush wrapped up, “I want you to know that if there’s any kind of reaction, America is behind you.” Olmert was pleased. “Thank you, Mr. President.”

Intelligence produced indications, as early as the following morning, that the reactor had indeed been eliminated — totally destroyed — and that there was no possibility of reconstructing it. A few hours later came indications about the chances of retaliation. “I estimate with caution,” said army intelligence chief Yadlin, “that Assad will accept the event and won’t retaliate.” Olmert breathed a sigh of relief.

A few days later Benjamin Netanyahu, head of the Knesset opposition, went to the news studio at Channel One and broke the media silence. Netanyahu said he knew about the mission, had been updated about it and backed the prime minister. Olmert watched Netanyahu’s television appearance with horror. It seems, however, the Syrians didn’t see it. Their silence continued, as did their restraint. Now, a decade later, Israel admits to what the whole world attributed to it, although it seems the whole story will never be told.