Animators with passion bring humor to digital content in Gaza

Three young Palestinians are determined to create socially relevant and sometimes-humorous digital content in Gaza despite some obstacles. 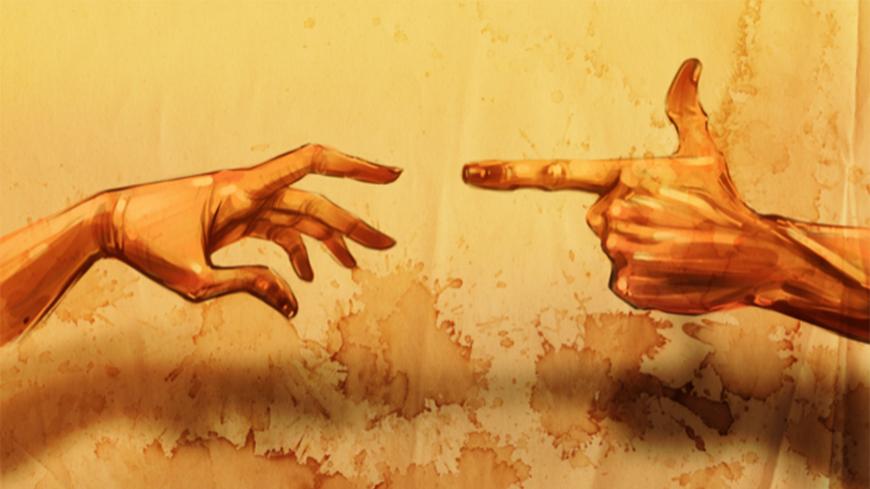 An illustration created by the Hawas Group for Creative Content, for a campaign to prevent violence against Palestinian women conducted by the Community Media Center in partnership with the UN Trust Fund to End Violence Against Women. - Hawas

GAZA STRIP, Gaza — Amid economic difficulties, high rates of unemployment and a general sense of pessimism in Gaza, three young Gazans have created a startup digital content company to help tackle Palestinian problems with a sense of humor and optimism.

A shared sense of humor and a passion for cartoons and animation led three young men in Gaza City to found “Barem,” a short-lived satirical magazine. In colloquial Arabic, “barem” means “to talk about specific issues.”

“Barem,” launched in 2014, was one of the first major projects of the Hawas Group for Creative Content, a startup founded by Ahmed al-Aloul, Hamza Ahmed and Yehya Jabr in December 2012. The company's initial focus was on animation and comics that touched on everyday life in Gaza. “Hawas” translates to “obsession,” and it reflects the passion the three men have for their work.

The Hawas team members had worked together at Johatoon for Cartoon, a company producing children's cartoons for television, from 2008 to 2011. They explained to Al-Monitor that after discovering that they shared the same goals, sense of humor and views on life in Gaza, they decided to launch their own business.

“Barem,” one of their company's early projects, used cartoons to highlight the funny aspects of Palestinian life in general and the situation in Gaza in particular. Its first issue came out in March 2014, and the second one landed in January 2015. The first edition had a print run of 3,000 and the second 2,000. Both were distributed for free in the West Bank and Gaza. A lack of money led to the company scratching the third issue, and the magazine folded in 2015.

“We wanted to publish the magazine every three months, but we did not have the necessary funds to go on,” said Aloul, the company’s caricaturist. “Therefore, we had to stop publishing.”

After Barem folded, the three creative young men decided to turn to business, with a goal of working on projects to benefit Palestinian society. “After the magazine shut down in 2015, we decided to produce traditional commercial content online and in papers,” Aloul said.

To that end, Hawas won a contract from the United Nations Relief and Works Agency (UNRWA) in 2015 to develop “Life Skills,” a book aimed at primary and secondary school students attending UNRWA schools.

Aloul noted, “Some of the works we created tackled social issues, namely a short animation clip for Oxfam in 2017 about [access to clean water in Gaza] and another clip about children’s dental decay for the Ard El Insan Palestinian Benevolent Association in 2017.”

Jabr, Hawas’ producer and designer, said, “We aim to shed light on the daily Palestinian issues in a creative and artistic manner, away from politics. We created a character [for an ad] about saving water for the local company Siksik. We also produced an animation clip titled ‘Against Terrorism’ for the Muslim Youth League.” In 2017, Hawas also developed “Stop Violence Against Women,” an animated strip, for the Community Media Center in partnership with the UN Trust Fund to End Violence Against Women.

“The market demand for technical digital content is low in Gaza, and we get paid very little for national projects compared to doing the same projects for Arab and international organizations,” Aloul said.

Through its founders' personal and professional relationships with members of a small digital company based in Saudi Arabia, Hawas has been able to reach large private and public digital companies in the kingdom. This was a major breakthrough for Hawas, as Saudi companies seldom work with digital production companies outside the kingdom.

The team would like to travel to Arab countries to make direct contact with companies, but unpredictable closures of the Rafah crossing make taking this next step impossible for the moment. In the meantime, they will continue to play an active role in promoting digital content in Palestine.