The Trump administration is expected to name John Hannah the next US Syria envoy. 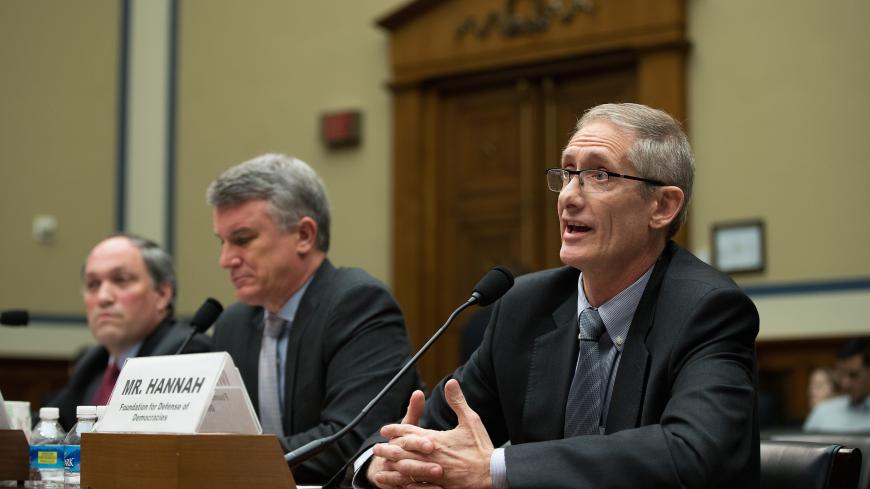 John Hannah (R), senior counselor at the Foundation for Defense of Democracies, testifies during a House Oversight and Government Reform Committee hearing titled "White House Narratives on the Iran Nuclear Deal" on May 17, 2016, in Washington. - GETTY/Drew Angerer

WASHINGTON — The Donald Trump administration is expected to name John Hannah as the next US Syria envoy, as it seeks to reinvigorate the UN-led Geneva negotiations and advance a political resolution to the Syrian conflict, multiple Syria experts and a US official told Al-Monitor.

A US official speaking not for attribution said the appointment was expected but that its exact timing was unknown.

The Trump administration has been consulting with like-minded countries to discuss mechanisms for trying to reinvigorate the Syria negotiations led by UN Special Envoy to Syria Staffan de Mistura.

The administration expects that there may be another meeting of diplomats from the like-minded countries to try to get on the same page before the next round of intra-Syrian Geneva talks.

There is also expected to be another round of Astana de-escalation talks around Feb. 22-23.

If he gets the job, Hannah will have a mess to contend with, starting with resolving escalating tensions with Turkey over US support for the predominantly Kurdish Syrian Democratic Forces (SDF), said former US Ambassador to Turkey and Iraq James Jeffrey.

“The problem is, guess who keeps us in the game: Turkey,” Jeffrey continued. “We use their bases. The only other way to get ourselves into Syria is through Iraq.”

Jeffrey said he would recommend that the US administration figure out how to come to a compromise on Manbij and stop giving weapons to the SDF.

“We should find a way to compromise on Manbij, to tell the YPG [that] we are going to stay on for a limited time with our own troops and you have to work out a deal with the Turks to make this something that is no longer an irritant,” he said.

Secretary of State Rex Tillerson, speaking on the sidelines of an Iraq donors conference in Kuwait on Feb. 13, said the United States does have meaningful leverage to exert in the Geneva process.

“The United States and the coalition forces that are working with us to defeat [the Islamic State] today control 30% of the Syrian territory, and control a large amount of population, and control a large amount of Syria’s oil fields,” Tillerson said in remarks to the press in Kuwait City today. “This observation that the US has little leverage or role to play is simply false.”

“We are very active in the discussions that are moving, all the talk toward Geneva, both in terms of working with the opposition voices to unify them and have them working toward an objective, and we’re working very closely with Russia, who has the greatest influence on the Assad regime and can bring Assad and the regime to the negotiating table in Geneva,” Tillerson continued. “So our participation, which is also in conjunction with and cooperation with a large group of partners now actually see things the same way we do in terms of a unified Syria, a democratic Syria, with the Syrian people deciding their own future through a new constitution and election. We have enormous support from our approach in terms of seeking a future for Syria.”