US Secretary of State Rex Tillerson supports developing a sustainable funding mechanism for UNRWA, but it is unclear whether he can convince anyone else in the Trump administration of such an approach. 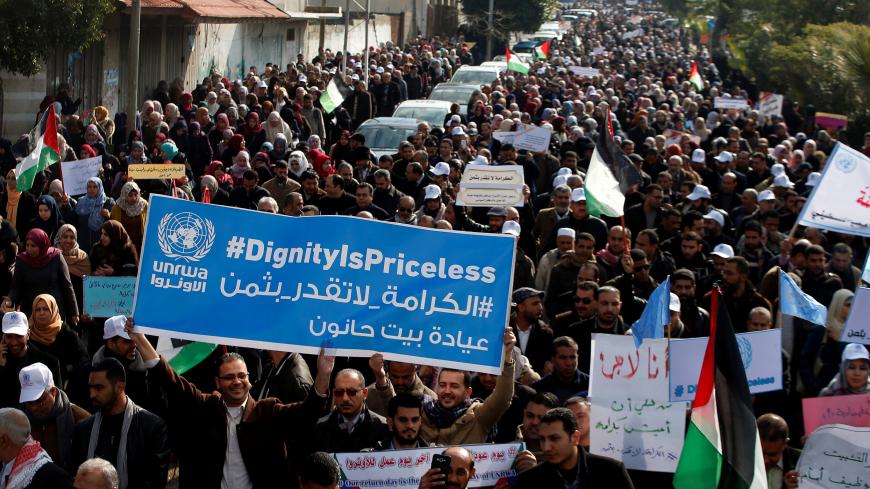 A Palestinian employee of the United Nations Relief and Works Agency holds a sign during a protest against a US decision to cut aid to the organization, Gaza City, Gaza Strip, Jan. 29, 2018. - REUTERS/Mohammed Salem

US Secretary of State Rex Tillerson supports a sustainably funded United Nations Relief and Works Agency (UNRWA), which departs from the position of the Donald Trump administration. He made the assertion during a Feb. 14 press conference in Amman with Jordanian Foreign Minister Ayman al-Safadi.

On the topic of US funding for UNRWA, Tillerson remarked, “[The United States] did release $60 million in order to ensure that teachers’, hospital workers’ salaries would continue to be paid uninterrupted.”

Tillerson made no mention of the publicly stated reason why the United States withheld another $65 million on Jan. 16 that had been committed to the UN agency to help cover its $800 million annual budget. Both Trump and his UN ambassador, Nikki Haley, have conditioned aid to UNRWA on the Palestinian’s “return to negotiations.”

Tillerson correctly noted in Amman that UNRWA is a UN agency, not a Palestinian organization. As such, he stated, “The UNRWA funding is an international commitment. Many countries are donors to UNRWA. And part of, I think, what we would like to see — and I know the foreign minister and I have had many discussions about this as well — is we need to put UNRWA on a more sustainable footing.”

The idea that a senior US official is talking about a sustainable funding model for the agency is diametrically opposed to Trump's earlier moves to politicize UNRWA. Riyad Mansour, the Palestinian ambassador to the United Nations, welcomed Tillerson’s comments. “We have been opposed to politicizing UNRWA, and I am happy that Mr. Tillerson is dialing back the attempt to insert politics into this important humanitarian agency,” Mansour said, speaking to Al-Monitor by phone from New York.

While Mansour welcomed the change in tone by the top US diplomat, he questioned the willingness of the United States to pursue the sustainable funding issue to its natural conclusion. “If we want to make UNRWA sustainable, we need to increase the UN’s contribution to its annual budget, bring in major economic entities like the World Bank and ensure that international support to UNRWA is multi-year and not made in short-term contributions.”

Mansour said that the United States' expectation that Arab countries could contribute more to UNRWA is unrealistic. “Arab countries have pledged to cover 7.8% of UNRWA’s annual budget, and they have lived up to this commitment. It is difficult to ask them to pay more while they have so many other challenges in the region.” The percentage, established decades ago, was reconfirmed by the Arab League in 2009.

The United Nations pays the salaries of 120 senior personnel at UNRWA, which employs some 30,000 persons. Mansour said that in 1973, the United Nations had agreed to pay senior UNRWA staff directly from UN headquarters in New York. “We need to expand on that by having a much bigger part of UNRWA’s needs come from the UN annual budget,” said Mansour.

Mansour is skeptical that this will happen. He said that attempts to suggest doing so to Haley were summarily rebuffed. “She told me to remove Article 7 from the agenda of the United Nations Human Rights Council, and the US will ensure sustainable funding from the UN. Article 7 makes discussion of the human rights situation in the occupied Palestinian territories a permanent agenda item at the Geneva-based council. According to the UN Human Rights Commission, the permanent agenda article reads ‘Human Rights Situation in Palestine and Other Occupied Arab Territories.’”

Mansour said he was promised plenty of money to keep UNRWA working for years if that agenda item were removed. “I told her that I represent Palestine in the UN in New York and that she should take this up with the Human Rights Council representatives in Geneva.”

The idea of sustainable financial support was well-received by UNRWA headquarters. Christopher Gunness, the UNRWA spokesman in Jerusalem, told Al-Monitor that the UN agency welcomes efforts to place UNRWA on sustainable financial footing, saying that it is in line with the 2017 report of the UN secretary-general, which was endorsed by the UN General Assembly. The report deals with the organizational sustainability of the UN and its subsidiaries.

“We welcome efforts to place UNRWA on a financial footing which allows sustainable, sufficient and predictable funding,” Gunness said. “[UNRWA’s] current unprecedented financial crisis shows more than ever before the urgent need for the international community to achieve this aim in reality and on the ground, which it has endorsed at the diplomatic level.”

Mansour said he doubts Tillerson’s welcomed position will win the day in Washington. “[Israeli Prime Minister Benjamin] Netanyahu wants UNRWA gradually shut down and replaced by a smaller UN agency, while most Republicans in the US are ideologically in favor of major reductions in financial aid, including US money going to the UN,” Mansour noted.

UNRWA is an important humanitarian agency whose sustainability should not be politicized. Support for the welfare of Palestinian children forced to live as refugees because of successive wars in the Middle East should not be a political football to be kicked around. The idea of a sustainable funding mechanism is a necessary one, and there is a clear international consensus on it. The time is now to turn this global will to help Palestinian refugees into a stable funding mechanism.