Unless Israeli society acts severely and decisively against political corruption, this corruption monster will take over every aspect of life. 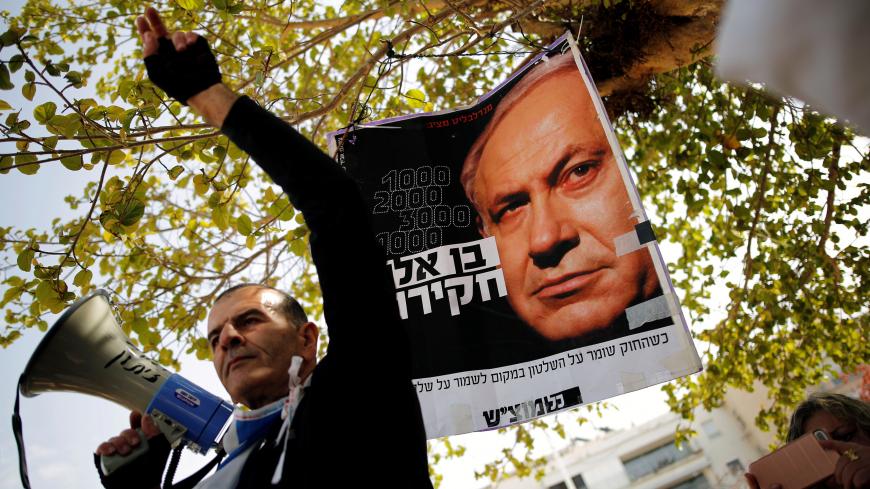 With every passing day, another brick is added to the towering inferno of corruption around Prime Minister Benjamin Netanyahu. Each news broadcast reports another crack in the bastion of aides and confidants Netanyahu built around himself. As his version of events disintegrates, Netanyahu is turning to a familiar line of defense known as “everybody does it,” along with the accusation that the media and political opposition are hounding him and his family. One can assume that such claims will not withstand the legal scrutiny of police investigators, the attorney general and court system. But is Netanyahu really being asked to pay an exorbitant price for violations of which his predecessors in power were cleared? Did the rules suddenly change in the middle of the game, as Vice President Spiro Agnew claimed during the Watergate affair?

Al-Monitor directed these questions to Maj. Gen. (res.) Yaakov Or, who served as deputy director of the State Comptroller’s office, the official government watchdog charged with oversight of the country’s security forces and agencies. “I have conducted hundreds of investigations and inspections and have seen up close those who deviated, the damage they caused and their failures,” said Or. “The number of elected and senior officials paraded before us in a march of folly on their way to investigations, trials, community service and jails has kept growing over the years.”

Or is no stranger to efforts to pressure and bend law enforcement authorities. “I was there. More than once, sadly, I saw shameless elected officials and the pressure by government on the keepers of the gate. More than once I suspected that the authorities were trying to buy time, to drag out inspections and investigations for years until they could claim there was allegedly no longer any public interest in the case,” Or said. And that’s not all. “I sometimes suspected that inside information about investigations and inspections was passed on to those under investigation,” said Or, who currently volunteers for various projects designed to restore public confidence in government and law enforcement authorities.

The annual Corruption Perceptions Index, compiled by Transparency International, has consistently placed Israel for several years in the lowest tier of OECD countries. In 2017, Israel even dropped four places compared to the previous year. And this obviously happened before the Israel Police recommended earlier this month indicting Netanyahu on charges of bribery for accepting gifts from tycoons (an investigation known as Case 1000) and allegedly conspiring with newspaper publisher Arnon Mozes to obtain positive coverage (Case 2000). It also preceded the latest arrests of top Netanyahu aides and the heads of the Bezeq telecom giant (Case 4000) on suspicions of corruption. These events could perhaps indicate already the tendency for next year’s report.

Doron Navot of Haifa University, who studies corruption, has found that the number of politicians involved in corruption is growing at a frightening rate. The number of Knesset members whose immunity from prosecution has been waived over suspicions of criminal wrongdoing categorized as corrupt doubles every 20 years or so, he said. Navot points to the years 2008-2010 as a turning point, with the convictions of Shas Welfare Minister Shlomo Benizri, Finance Minister Avraham Hircshson and Likud Party lawmaker Tzachi Hanegbi. Navot, who served on a committee appointed by the State Comptroller to examine links between government and big money, said that indicting and convicting elected politicians for what they’ve done do not point to a political change or the development of a new political culture. This simply reflects the fact that these politicians went too far, even compared with the low Israeli ethical standards.

In his book “Political Corruption in Israel,” cited by the Israeli Political Science Association for academic excellence, Navot outlines three periods. In the 1950s, a substantial portion of corruption involved attempts to strengthen the ruling party. In the 1980s and '90s, some of the corruption involved attempts to obtain power by violating election funding laws and handing out jobs. In recent years, the dominant factor in most corruption scandals has been monetary and material: bribery, embezzlement of public funds, double invoicing, money laundering, etc. — mostly for personal gain.

Navot argues in his book that although the US political system is among the most corrupt in the developed world, controlled by tycoons and corporations, the vast majority of Israelis, among them decision-makers and opinion shapers, still view the United States as a role model. In addition, Israeli corruption has a unique aspect involving the West Bank settlement enterprise, which includes extensive political appointments, attempts to undermine the Supreme Court, and support for leaders perceived as strong and able to serve a hawkish agenda.

On the other hand, claims Navot, the country’s political elites sought throughout the years to affect major changes in Israel’s relationship with the Palestinians — without true democratic legitimacy. They did so by weakening the political party system — for example, splitting the Likud Party in order to establish the Kadima Party of the late Prime Minister Ariel Sharon — and protecting strong leaders like Sharon or Aryeh Deri, who were suspected of corruption but also perceived as able to bring about change with the Palestinians and security for the state. To quote a popular Yiddish saying, “When you need a thief, you take him down from the hanging noose.”

Israeli politicians have always avoided speaking out clearly and unambiguously about corrupt behavior by their peers. Many of them supported those suspected of corruption, at one point or another. Navot notes that since 1990, there has not been any widespread protest against the conduct of elected officials.

Maj. Gen. Or said elected officials and their cronies who undermine the rule of law rely on public indifference or acceptance, and on an erroneous perception that it is best to leave them in power. “We are being misled by fear mongers and by ingrained concern that actions against the regime will be ostracized as treason and sacrilege. We are raising a monster of corruption dragging us toward the adoption of undeveloped countries’ standards,” Or noted. “If corruption is not uprooted with an iron hand, it turns into a malignant disease coursing undetected through the body.”

The cry “down with corruption” directed against the ruling Labor Party in the 1970s that preceded its downfall in 1977 is as valid and relevant today as it was then, Or claimed, summing up his diatribe. “But today, the danger lies not just in the acts of the corrupt but also in their corruption of the public and poisoning of Israeli society with anti-democratic norms,” Or argued. He therefore suggested updating the “down with corruption” protest signs of the 1970s into giant billboards with the cry “down with the corrupters."