No chance for peace while settlers dream of holy war

Messianic settlers are exploiting the deaths of those killed in violent attacks as excuses to build ever more settlements and claim all of the West Bank. 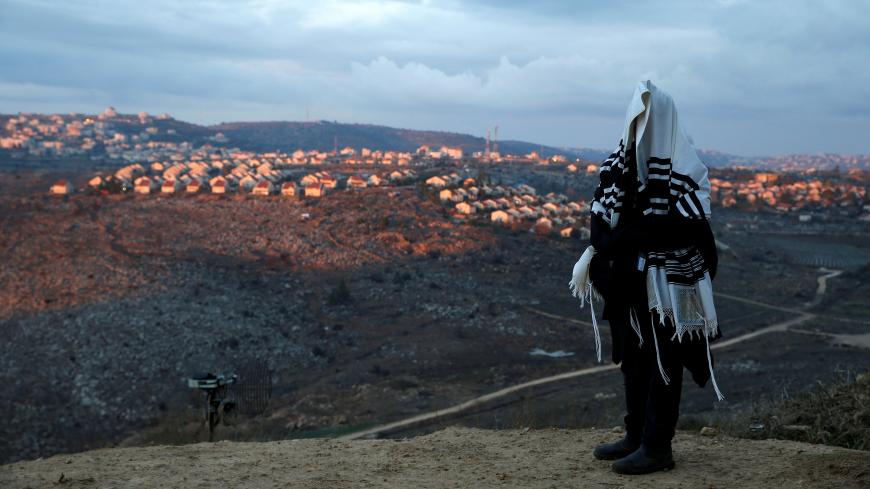 A Jewish man covered in a prayer shawl prays in the Jewish settler outpost of Amona in the West Bank, Dec. 18, 2016. - REUTERS/Baz Ratner

The clash between Israel and Iran in the Syrian arena Feb. 10 has sparked fears of an escalation into all-out war, and rightly so. The risk of thousands of precision missiles fired at Israel resulting in thousands of casualties and devastating the Israeli economy is prompting decision-makers in Jerusalem to step on the brakes. The regime in Tehran also has good reasons to exercise caution: War with Israel would play into the hands of US President Donald Trump and the Republican camp, both seeking to undo the 2015 nuclear agreement with Iran. Its end would result in renewed sanctions on Iran, dealing a severe blow to millions of Iranians.

When neither side has a rational interest in escalation, one can assume each will make every effort to avoid one. However, the same cannot be said when a group of self-appointed warriors of God holds sway over political decisions. Enlightened states hospitalize or incarcerate people who undermine national strategic interests for the sake of “sanctifying God’s name.” The State of Israel, on the other hand, caters to a fundamentalist group willing to sacrifice its sons and daughters for a piece of land. The Jews call them “martyrs," and for Muslims they’re “shahids,” an Arabic word that also means martyr. Jewish rabbis promise their dead a life in Paradise. Muslim clerics add a bonus: 72 virgins awaiting the shahids in Paradise.

On Feb. 5, Rabbi Itamar Ben-Gal of the West Bank settlement Har Bracha was murdered in a terror attack outside Ariel, another settlement. Eliezer Melamed, the rabbi of Har Bracha and founder of the rabbinical seminar located on the outskirts of the Palestinian city of Nablus, delivered a eulogy at his graveside. “Recently, Rabbi Itamar and his wife Miriam spoke about the possibility that one of them would be killed for the sanctification of God’s name, and agreed that they were prepared to courageously rise to the challenge,” Melamed said. This spiritual leader of a significant religious Zionist group, a community rabbi whose salary is paid by Israeli taxpayers, consoled the mourners by saying, “Blessed is one who merits dying for the mitzvah [godly command] of settling the Land of Israel.”

Ordinary people watching four children accompany their father to his grave see a human tragedy. For some, the murder of an Israeli citizen by an Arab is further proof that there’s no partner for peace. For others, it shows that the time has come to vacate the Israeli settlements. Melamed and his disciples view the death of a friend or relative at the hands of a terrorist as the realization of a divine mission. “The best revenge is to keep building, to build another neighborhood and another neighborhood, and to turn Har Bracha into a city,” Melamed exhorted the mourners.

The young widow also wishes to endow her husband’s murder with metaphysical significance by turning her sorrow into a tool with which to dig the foundations of additional settlement homes. "We trust you that in this case, as well, you will help us provide the real answer, which is the expansion and construction of Har Bracha," Miriam Ben-Gal told Sara Netanyahu, the wife of Prime Minister Benjamin Netanyahu, who came to pay a condolence call. The mother of four small children who will grow up fatherless in a hostile neighborhood explained to her visitor, “Our grip on this land is critical.” Quite right. Every settlement outpost is critical in the settlers’ struggle to scuttle prospects of a diplomatic agreement with the Palestinians.

The two-state solution — the only alternative to Israel's becoming a binational or apartheid state — would involve vacating isolated West Bank settlements such as Har Bracha, Itamar and Havat Gilad to make way for a Palestinian state. However, successive Israeli governments have taught the settlers that every murder of one of their own holds the potential for another outpost, for another obstacle on the road to compromise. For example, following the March 2011 murder of five members of the Fogel family from Itamar, their friends established a new outpost adjacent to the settlement, and the government approved the construction of hundreds of new housing units in the occupied territory. Thirty days after the terror attack, the cornerstone was laid for a rabbinical house of study in Itamar that would bear the name of the head of the family, Ehud Fogel.

Rabbi Raziel Shevach, a Havat Gilad outpost resident who was murdered in a terror attack last month, was interred in a new makeshift cemetery established the day after the attack, a clear sign of the intention to turn the outpost into a permanent settlement. Indeed, on Feb. 4 the government approved plans to make the outpost into an authorized settlement.

A new book by Neima Barzel, “Redemption Now: The beliefs and activities of the Jewish settlers in the West Bank and Israeli society,” illustrates the central role played by death and war in the messianic plans of national-religious Zionism. She cites remarks by Amnon Shapira, the former secretary-general of the religious Bnei Akiva youth movement, who said, “Judaism does not view life itself as the one and only supreme value.” The book also quotes Yisrael Hess, one-time rabbi of Bar-Ilan University, who pledged, “The day will come when we will all be called upon to carry out a holy war, the mitzvah war to obliterate Amalek,” a reference to the ancient people considered the archenemies of the Israelites.

At a Jan. 21 seminar held by Tel Aviv University’s Steinmetz Center for Peace Research to discuss Barzel’s book, writer Haim Be’er accused the settlers of violating three fundamental Jewish precepts that ban bloodshed, incest and idolatry at all cost. Be’er reminded his listeners of the Jewish Underground, the West Bank settlers who carried out violent attacks in the 1980s against Palestinians, arguing that the settlers had infected Israeli soldiers with violence and vulgarity. “This is a disgrace that I attribute to the control of another people,” said Be’er, himself a graduate of religious Zionist education. Noting the sin of forbidden sexual relations committed in recent years by a handful of rabbis within religious Zionism, he added that attributing sanctity to the biblical Land of Israel — today’s West Bank — was nothing short of idolatry.

When a limited clash with Iran threatened to drag Israel into a bloody war, Russian President Vladimir Putin came to the rescue and calmed both sides. But when a fundamentalist Jewish minority imposes on Israel a religious war to the end — or to the coming of the messiah, whichever happens first — no one comes to Israel's salvation. The latest contribution by the only man in the position to save Israel from the disaster of its 50-year occupation of another people, Trump, was advice for Israel to be “very careful” with the settlement enterprise. Despite his own advice, the president called his hasty, controversial Dec. 6 announcement recognizing Jerusalem as the capital of Israel his most important achievement since being sworn in.