Israel is looking to Russia to help dial back Iran's ambitions to expand its presence and influence. 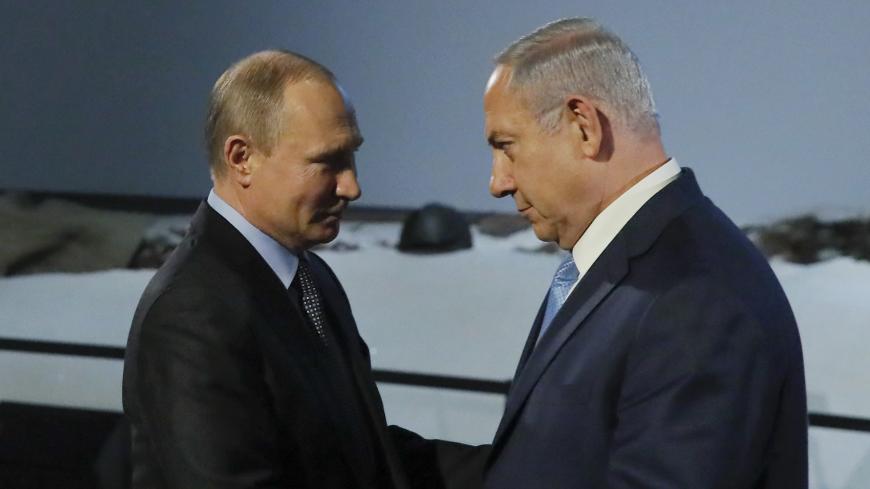 Russian President Vladimir Putin has been rather mum on aspects of his meeting this week with Israeli Prime Minister Benjamin Netanyahu, but the latter has made it clear they discussed concerns about Iran's bold actions in the Middle East in general and in Syria in particular.

Putin’s encounter with Netanyahu took place Jan. 29, a few days after the Israeli leader met with US President Donald Trump. Russia’s Kommersant newspaper, citing an unidentified source in Washington, suggested the United States and Israel want to persuade Russia to counter Iran not only in Syria but also on the Iranian nuclear deal. Israeli Ambassador to Russia Gary Koren told Kommersant that Moscow “shares the concern over the Iranian nuclear program and perfectly understands its most dangerous potential” — otherwise it wouldn’t have insisted on implementing the Joint Comprehensive Plan of Action with Tehran in 2015.

Upon his return to Israel, Netanyahu told journalists, “I told Putin that Israel is very serious about two emerging trends. One is the Iranian military presence in Syria. The other is Tehran’s attempts to set up manufacturing of precision weapons in Lebanon that will be used against the State of Israel. I told him we were not prepared to tolerate any of these attempts. And if we need to act, we will act."

The Russian party was represented by Foreign Minister Sergey Lavrov and Defense Minister Sergei Shoigu, as well as Deputy Prime Minister Arkady Dvorkovich. The Putin-Netanyahu tete-a-tete lasted an hour and a half — 30 minutes longer than planned.

A source in the Israeli delegation later told the Russian press that Netanyahu detailed to Putin “attributes of creeping expansion” by Iran across the Middle East and described associated threats.

Israeli Minister of Jerusalem Affairs Zeev Elkin, a native of the Soviet Union who always accompanies Netanyahu on his trips to Russia, also acts as his personal interpreter at negotiations with Putin. In a televised interview, Elkin said, “As usual, such meetings are very effective and, as usual, their efficiency is due to the content of their conversations always remaining between the two leaders.”

Their conversation was indeed highly confidential and apparently very engaging. Moscow is certainly concerned over Iranian plans in Syria, especially if they could upset reconciliation of the warring parties. Although Tehran and Moscow remain allies on a Syrian settlement, the divergence of their interests is evident on the ground. Russia, however, will not take any public steps against Iran and will continue to balance Israeli and Iranian interests. Moscow needs each party in its own way.

This is why we won’t find any public remarks by Putin on the Syrian situation following the meeting with Netanyahu. This is Russia's golden rule: Moscow doesn’t publicly discuss its partners in the presence of their enemies.

Netanyahu’s visit was officially devoted to Holocaust Remembrance Day and he went to the Jewish Museum and Tolerance Center in Moscow to attend the opening of an exhibit on the Sobibor (Poland) death camp. Putin and Netanyahu laid the memorial foundation stone for a future monument dedicated to “The Heroes of Resistance in Nazi Camps and Ghettos.”

As always, Moscow didn't accentuate Iran as a separate agenda item, trying hard to avoid any mention of its partner in the Syria conflict. Putin also didn’t mention Iran or Syria during his opening public remarks. His only reference to the conflict in Syria was his statement at the museum: “Our memory is an admonition against any attempts [at] world dominance, [to] declare, build or reaffirm one’s exceptionalism on the basis of race, nationality or any other superiority.”

Putin stopped short of developing further parallels between Nazism and modern-day terrorism, including Islamic State activities, though in the past he has made such comparisons. Netanyahu, however, took full advantage of the Holocaust tragedy to dwell on his most daunting concern: “I think that the main lesson of the rise of the Nazis and then their defeat is that we have to face murderous ideologies in time and with power. This is our mission today as well."

It's remarkable that in the wake of Netanyahu's visit, the Kremlin did say it had proposed discussing the Israeli-Palestinian issue. In Moscow’s view, it would be logical to touch on the matter, since in two weeks Palestinian President Mahmoud Abbas will be visiting Russia. Abbas is expected to bring new proposals on the negotiation format to replace the seemingly dead Oslo Accord. Among the likely formats would be a new international conference on the Middle East designed to ultimately recognize the independent State of Palestine. Palestinian authorities see Russia as a potential venue for such a conference.

Moscow is still silent on the idea. Russian diplomats, however, have repeatedly stated there is no alternative to direct negotiations between the Palestinians and Israelis. Moscow’s own proposal to host such talks in Russia is still in place. Russians, however, realize quite well that conditions aren't ripe for such talks to bear any timely productive results. So if the Palestinian issue was discussed at all, no one would dare reveal any details publicly.