Reporters for state-run newspapers in Egypt will now have to get permission from the government to travel to certain countries. 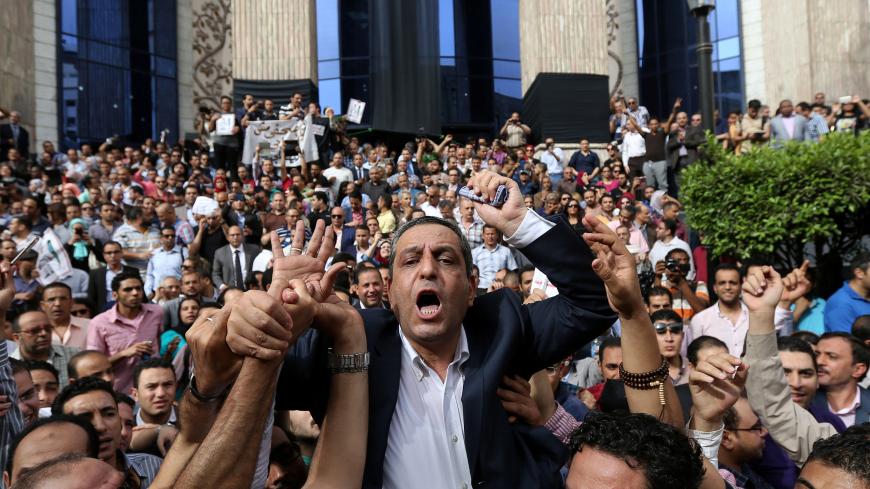 Journalists carry Yehia Kalash, head of the Egyptian Press Syndicate, during a protest against restrictions on the press and to demand the release of detained journalists, in front of the syndicate's headquarters in Cairo, May 4, 2016. - REUTERS/Mohamed Abd El Ghany

CAIRO — Egypt's National Press Authority (NPA) recently issued a travel restriction that some in the news business consider a blessing, while others see it as a curse.

The move obliges reporters, editors-in-chief and board chairmen working for state-run newspapers to get NPA permission before heading to seven "restless" countries: Lebanon, Syria, Palestine, Turkey, Sudan, Yemen and Libya. Before the mandate was issued, journalists needed only the approval of their editor-in-chief and board chairman to travel there for work. Journalists are still free to travel to these countries without formal approval on their own time.

"Many countries [have taken] such procedures to secure journalists who cover news in turbulent areas," Gabr said at a press conference, adding that the decision targets those working for state-owned outlets, since they are considered spokespeople of the country. The rule doesn't apply to other journalists.

Speaking to Al-Monitor, Jihan Sha'arawy, a senior member of Egypt's Press Syndicate who works for the state-owned Al-Ahram newspaper, lauded the NPA decision, saying it doesn't impose restrictions on journalists or hamper their work. "The decision helps the NPA take the required precautionary measures to protect journalists who cover news in areas that witness severe clashes," she argued.

"Journalism is a tough profession and journalists love adventure. Therefore, this step helps protect journalists from being lured by outlaw groups that exist in the countries plagued by political turmoil. … The NPA should be informed beforehand to follow the work of those journalists," Sha'arawy continued.

Claims that the NPA's decision is an encroachment on the Press Syndicate's role are groundless, she stressed, explaining, "There is integration between the roles of the two entities. In critical issues, the NPA should make the final decision since it is more powerful and has full authority."

The syndicate primarily regulates relations between journalists and their employers, she noted.

The NPA was formed following a decree by President Abdel Fattah al-Sisi in April establishing three bodies to regulate media affairs: the NPA, the National Media Authority and the Supreme Council for Media Regulation.

Since these groups were formed, journalists have expressed mounting concerns about freedom of the press. This latest decision has convinced many they were right to worry.

Writer and political analyst Ammar Ali Hassan told Al-Monitor the decision is politically motivated and has nothing to with journalists' safety. Such decisions, he said, are absurd and restrict the freedom of journalists to travel and cover the news.

"Journalists are the crucial source of information," he said. "Instead of encouraging Egyptian journalists to travel, cover news at hot spots and get a scoop, the NPA imposed further restrictions. The NPA should help the state-owned newspapers restore their pioneering role instead of running them into the ground with such decisions."

Hassan accused the NPA of focusing on certain countries, such as Qatar and Turkey, for political reasons. "They fear that journalists will travel to these countries and work for their newspapers and media outlets," he said.

Officials said some reporters who have traveled to Turkey and Qatar, in particular, are believed to be working for foreign outlets.