US touts military build-up against Iran in Syria

The Donald Trump administration’s stated goal of using US troops in Syria to contain Iran, while failing to offer a formal Syria policy, is irritating lawmakers. 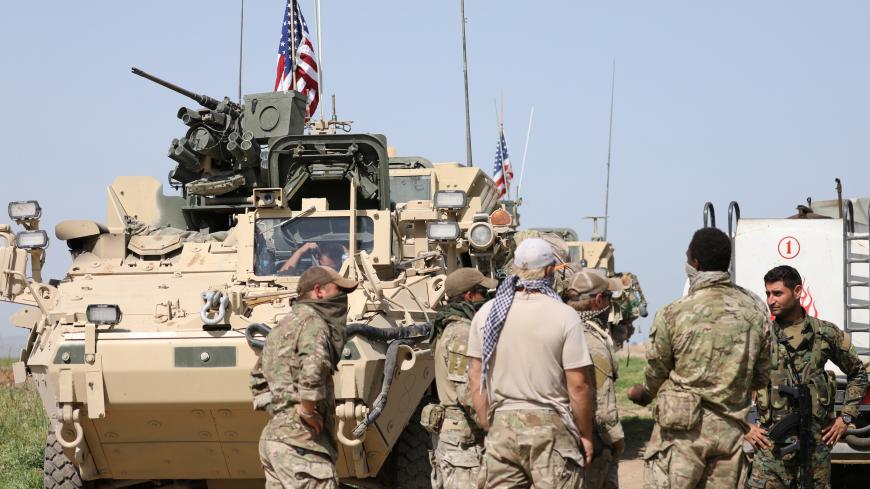 Kurdish fighters from the People's Protection Units (YPG) chat with members of US forces in the town of Darbasiya next to the Turkish border, Syria, April 29, 2017. - REUTERS/Rodi Said

With the Islamic State (IS) on the run across Syria, the Donald Trump administration has committed to using US Armed Forces in the country to counter Iranian influence.

Its refusal to publicly provide details — or a legal justification — for its military strategy, however, is raising bipartisan concerns in Congress that the United States could be drawn further into conflict with a wide array of actors in Syria’s complex civil war with no timeline for withdrawal.

Testifying before the Senate Foreign Relations Committee on Thursday, David Satterfield, the acting assistant secretary of state for Near Eastern affairs, outlined US goals in Syria as finishing off IS, stabilizing northeastern Syria and countering Iranian influence. But he declined to publicly disclose what activities US forces in Syria are engaged in outside of the counter-IS campaign, raising bipartisan alarm bells.

“That won’t pass muster,” committee Chairman Bob Corker, R-Tenn., interjected. “I’m sorry. You can generally state what the purpose of our military is beyond [IS] without getting into any kind of classified materials.”

Sen. Chris Murphy, D-Conn., who initially asked Satterfield the question he declined to answer, expressed concerns that eliminating Iranian influence from Syria entirely was a fool’s errand that could keep US troops tied up in Syria forever.

Satterfield testified that one of the conditions when weighing whether to start pulling out the 2,000 or so US troops in Syria would be “our broader assessment of where the political transition, where the Iranian trajectory of influence in and through Syria stands.”

“There is no specific calculus for this,” he told lawmakers. “There’s certainly not hard, quantitative numbers that can be attached. It is something … that we will review on a progressive basis over the time ahead.”

Responding to a question from Sen. Marco Rubio, R-Fla., on what would give the United States leverage to counter Iranian and Russian support for the Bashar al-Assad regime in a political settlement, Satterfield noted that “our military presence associated with the [opposition Syrian Democratic Forces] in a critical and very significant piece of Syrian territory is a factor.”

Sen. Ben Cardin, D-Md., the top Democrat on the committee, also voiced concern that the Trump administration does not have the necessary legal authorization from Congress to keep US troops in Syria beyond the defeat of IS.

“It’s hard to understand your response with even the most broad views of [the existing war authorization] covering anything close to what you’re saying,” Cardin told Satterfield.

Further complicating matters, the Iranian military presence and influence is concentrated in southern Syria, near the Israeli and Jordanian borders, rather than northeastern Syria, where most US troops are actually stationed, said Robert Ford, a former US ambassador to Syria under President Barack Obama and a fellow at both Yale and the Middle East Institute.

“It’s not clear to me that this troop deployment would meet the strategic objective of limiting Iranian influence in Syria in a way that is significant,” Ford told Al-Monitor.

“Some people in the government and outside the government think that by having US troops in eastern Syria, they will be able to compel Bashar al-Assad to make concessions in peace talks,” Ford said. “Having watched Bashar al-Assad in this conflict, he makes no compromises. He will take as long as he needs to win. It’s a hope; it’s not an analysis."

He added, “That again just leads me to conclude that this is going to be an indefinite deployment.”

The Pentagon acknowledged in December that the United States has some 2,000 soldiers in Syria, well above the approximately 500 soldiers it had previously acknowledged before Al-Monitor reported on the heightened troop levels in November.

Before the Pentagon publicly revised its troop tallies, Secretary of Defense James Mattis noted in November that the United States will maintain forces in Syria until there is progress on the UN-sponsored Geneva peace process.

A Pentagon spokesman told Al-Monitor that there is "not a set list of conditions tied to US involvement on the ground in Syria,” noting that there’s only a set of broad-based goals instead, such as progress in stabilization and the Geneva peace talks.

The Department of Defense further irritated Congress by refusing to send anyone to testify alongside Satterfield on Thursday, a point that both Corker and Cardin emphasized at the beginning of the hearing.

Two Democratic lawmakers on the committee told Al-Monitor that the Pentagon gave no reason for not sending anyone to testify. Corker, however, said the Pentagon informed him that they did not feel it would be appropriate to brief the Foreign Relations Committee on Syria before briefing the Senate and House Armed Services Committees, which have jurisdictional oversight over the Defense Department.

“They just felt that protocol was appropriate for them to brief [the Armed Services committees] first,” Corker told Al-Monitor. “But it took a while to get to that point. We wish they had been there today and that would have been very helpful.”

Corker noted that his committee would follow up with Satterfield in a closed-door setting to pursue further questions on the US military role in Syria beyond IS.

However, a congressional aide told Al-Monitor that the Senate Foreign Relations and Armed Services committees jointly submitted a request for the Department of Defense to brief both committees on Syria as far back as November.

“I’m aware of the criticism, and again, we’ll continue to work with the committees of authorization, as well as other committees, as well as other members to provide witnesses, briefings as we can,” Pentagon spokeswoman Dana White told Al-Monitor. White noted that the Department of Defense’s undersecretary for policy, John Rood, only joined the Pentagon this week — almost a year into the Trump administration.

For his part, Ford said the lack of transparency is likely proof that the Trump administration does not yet have a formal policy on US military objectives in Syria.

“David Satterfield is one of the foreign service’s best people on the Middle East,” Ford told Al-Monitor. “The fact that David didn’t talk about it suggests that there is not a fully approved policy document yet because David is extremely diligent and precise.”

Jack Detsch contributed to this report.