A new website allows Muslim worshippers to assess and rate preachers and find out where they will be delivering Friday sermons in the Gaza Strip. 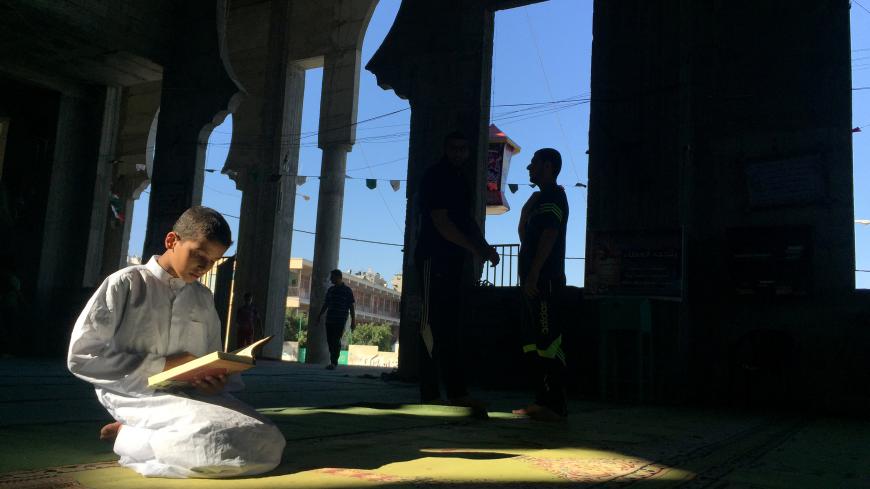 A Palestinian boy reads the Quran at a mosque during the holy month of Ramadan, Gaza City, Gaza Strip, June 17, 2016. - REUTERS/Suhaib Salem

GAZA CITY, Gaza Strip — As of this year, Gazans have been able to go online before heading to the mosque and find out where their favorite Islamic preacher will be leading Friday prayers. The Ministry of Religious Affairs enabled them to do so when it launched the platform Khotaba, which in Arabic means “preachers,”  on Jan. 2. The website also allows users to assess the performance of every preacher in the Gaza Strip and post feedback on his sermons. Preachers are evaluated using a system of one to five stars: unacceptable (one star), acceptable (two stars), good (three stars), very good (four stars) and excellent (five stars).

Yousef Farhat, general director of the Department for Preaching and Guidance at the Ministry of Religious Affairs, told Al-Monitor, “Previously the ministry’s Friday sermon schedule was distributed as hard copies specifying the name of the preacher, the exact date and the mosque where the Friday sermon is to be delivered. At the end of 2017, the ministry decided to shift to a 'soft copy.' The website informs the preacher at which mosque across the Gaza Strip governorates he will be preaching and allows him to see his assessment. … The website helps worshippers track their preferred preachers and locate the mosque in which they are delivering their Friday sermon. It includes a biography of each preacher indicating his certificates of Islamic studies.”

Farhat said, “The program — aimed at improving preachers’ performance — allows the Ministry of Religious Affairs to get an idea about each preacher and how the public is receiving the weekly religious sermons. When a preacher gets more than one negative feedback at more than one mosque, the ministry will form a special committee to follow up on the evaluation.” A ministry committee has already investigated the performance of several preachers, who then had to take courses in Sharia and the Islamic faith to improve their sermons.

“The program motivates preachers to improve their Friday sermons by interacting with worshippers, narrating religious events, using proper Arabic and refraining from talking about politics,” Farhat added. “When a preacher fails to deliver a strong, convincing sermon and gets negative feedback on the website, the ministry will surely let him go. We will not keep any unqualified preacher.”

A source at the Department for Preaching and Guidance in Gaza who requested anonymity told Al-Monitor, “There are 1,050 mosques in the Gaza Strip and 1,500 preachers. Seven hundred eighty mosques are affiliated with the Ministry of Religious Affairs, and the ministry sends a preacher to each mosque every Friday to give the weekly sermon. The other mosques are registered with the ministry but are managed by political parties, which dispatch preachers affiliated with them to deliver Friday sermons.”

Gazans have already criticized a number of Friday sermons that mixed political issues with religion. Preachers close to Hamas have accused the Palestinian Authority (PA) of betrayal of Palestinian nationalist values, in light of its security coordination with the Israelis.

Momin Awad, a Gazan with reservations about some preachers, told Al-Monitor, “A Friday sermon is supposed to provide religious lessons and tackle community issues with the purpose of facilitating a Muslim’s daily life. However, some preachers unfortunately deviate from this path and adopt a discourse of hatred [e.g., against Hamas opponents] despite awareness campaigns by human rights associations to curb hate speech in Gaza.”

“The website forces preachers to shoulder their societal responsibility,” Awad said. “It also allows worshippers to criticize sermons. This would improve sermons in the best interest of society in the Gaza Strip, amid [its] social and economic crises. We need sermons that instill social unity to deal with the difficult circumstances.”

Awad said that he will not hesitate to submit a complaint about weak or bad sermons. He also remarked that when he finds a sermon useful, he will provide positive feedback to the preacher and ask his friends to visit Khotaba to say good things about the preacher and improve his online assessment.

Local resident Ahmed Muhanna said that although many Gazans are willing to rate preachers, they would not do so under their real names out of fear. He noted that the practice of lodging complaints is not common in Gazan society, where it is considered disrespectful to criticize preachers and religious authorities.

“Mosques in the West Bank are also criticized [on social media] because their preachers are close to the PA,” he told Al-Monitor. “Criticism has been leveled at a Friday sermon airing on Palestinian state television every Friday and delivered by the PA supreme Sharia judge, Mahmoud al-Habbash, at presidential headquarters in Ramallah. During several sermons in the presence of President Mahmoud Abbas, Habbash has lashed out at the government in Gaza.

Mohammed al-Najjar, another Gaza resident, has noted an improvement in the last two Friday sermons at his neighborhood mosque in Sheikh Radwan, in Gaza City. “The last two sermons were very conciliatory and humanitarian,” he told Al-Monitor. “This reflects changes brought about by the Khotaba platform. I hope for more patriotic and conciliatory religious workshops, seminars and sermons.”

Ramez al-Halaby, a preacher, praised Khotaba to Al-Monitor. He had on several occasions on the radio criticized the political discourse at Friday sermons. Because worshippers have different political orientations and affiliations, he believes they should not be forced to accept or have to listen to the preacher’s personal perspective on politics.

“A Friday sermon must seek to bridge differences of opinion and tackle humanitarian, religious and social issues of interest to all citizens,” he told Al-Monitor. “A preacher delivering a politically biased Friday sermon could get carried away and fail to choose appropriate terms and vocabulary. This would annoy worshippers, who above all head to the mosque to hear the words of Allah.”

Halaby concluded, “Since the beginning of the year, it seems all preachers tasked with delivering Friday sermons have reached a consensus to focus on the steadfastness and resilience of the Gaza Strip residents in facing their multiple crises and predicaments.”