IRGC commander says 'former official' may be involved in protests

The head of the IRGC hints that a former government official was involved in sparking the protests, with some believing it was a reference to former President Mahmoud Ahmadinejad. 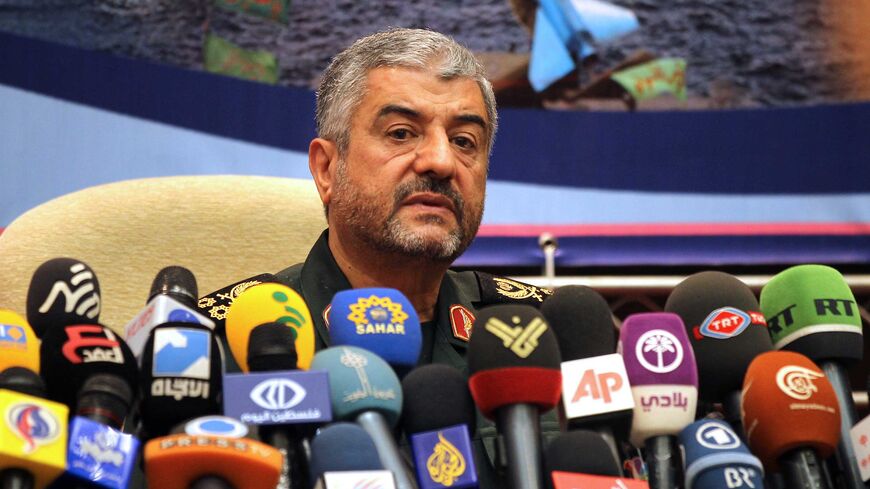 Maj. Gen. Mohammad Ali Jafari, commander of the Islamic Revolutionary Guard Corps (IRGC), spoke to reporters Jan. 3 about the protests that have rocked Iran in the last week and hinted that a former government official may have been involved in initially starting the protests that quickly spiraled out of control.

When asked by reporters whether it was true that a “former official” was involved in sparking the protests that started in Mashhad, Jafari said, “This call [to protest] started with a website that is linked to an individual who has opened his mouth in opposition to the values and principles of the system.” Jafari continued, “Security officials are investigating this matter, and if they see interference by this former official, certainly he will be confronted by law enforcement.”

Jafari did not specify which former official he was speaking of, but speculation by some analysts leads to former President Mahmoud Ahmadinejad, who has been in a constant public battle with Iran’s judiciary over corruption cases involving his former Cabinet members. In the last few months, Ahmadinejad has released numerous videos threatening action if the judiciary did not disclose all of its documents relating to him and his Cabinet.

Since the protests started, Ahmadinejad has been silent. The website that is affiliated with him, Dolat-e Bahar, however, did publish a letter reportedly by a group of Tehran University students demanding that President Hassan Rouhani resign and immediately hold elections.

Regardless of how the protests started, it is undeniable that they quickly spread to other provinces with very little control or coordination. Jafari said that according to the IRGC’s calculations, a total of 15,000 protesters were involved in the demonstrations across the country and that the largest single protest was attended by approximately 1,500 people. He said the IRGC was directly involved in quelling protests in the provinces of Hamedan, Esfahan and Lorestan.

Jafari acknowledged the economic grievances of the protesters but also indirectly criticized Rouhani’s policies of wanting to link Iran’s economy to the West. “Some feel that a friendship with America will improve the economic situation, but these people should look at a country such as Egypt, which has sacrificed everything for friendship with America,” Jafari said.

In response to the protests across the country, officials held pro-government rallies. Fars News wrote, “Today, in many of the country’s provinces, the revolutionary nation of Iran's roar was heard above the insults of the rioters and the enemies of Iran against sanctities.” The article continued, “The people of Iran once again proved they are always supportive of their revolution and will not tolerate insults against sanctities for one moment.” Some of the pro-government rallies took place in Qom, Kermanshah, Hamedan, Khorasan, Esfahan and Lorestan, all provinces that experienced protests in their smaller cities.

One international consequence of the protests is that French Foreign Minister Jean-Yves Le Drian decided to postpone his upcoming trip to Tehran. The decision was made after Rouhani and French President Emmanuel Macron spoke on the phone.

While it appears that protests are dying down across the country, there were fears that the security situation would deteriorate into something similar to what happened in Syria. Iranians started tweeting with the hashtag “We will not become Syria” and expressed worries that the protests might degenerate into more violence. Others who supported the protests responded with the hashtag “We will become Tunisia.”