Why Iran protests matter for Iraqis

The Iranian protests could have an impact elsewhere in the region, potentially weakening Iraqi Shiite parties loyalty to Tehran. 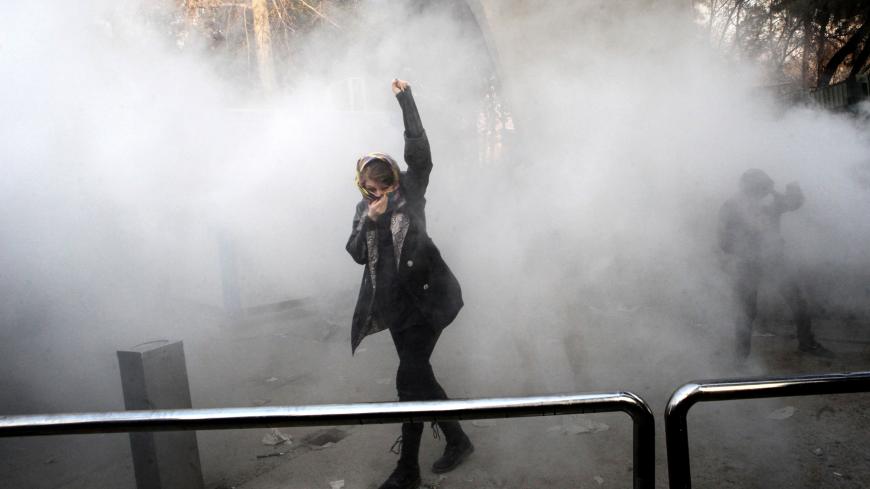 An Iranian woman raises her fist amid tear gas at the University of Tehran during a protest driven by anger over economic problems, Tehran, Iran, Dec. 30, 2017. - STR/AFP/Getty Images

In light of Iran’s growing influence in the region, the Iranian protests are no longer seen as a domestic affair. What is happening will have repercussions on Iran’s allies and its rivals, especially in countries like Iraq, where Iran is engaged in a power struggle with rivals.

While these protests have put pro-Iranian Shiite parties in a critical position, they have created a glimmer of hope for those who are dissatisfied with Iran’s role in Iraq, especially Sunnis and Kurds.

“Iran won an overwhelming victory determined by its own people under the leadership of the late Imam [Ruhollah] Khomeini," said Iraqi Vice President Nouri al-Maliki in a Jan. 3 statement. "We are confident that the Iranian people and the wise leadership represented by the great Ayatollah [Ali] Khamenei will curb all foreign plans [to undermine Iran].”

Maliki tried to downplay the significance of the protests, labeling them a “domestic affair while Iran’s enemies at home are trying to stir up confusion.”

Following in the footsteps of Khamenei and other Iranian officials, Maliki blamed foreign parties such the United States, Israel and Saudi Arabia for the ongoing protests, turning a blind eye to the domestic reasons that triggered them. “The collaborators at home and Iran’s enemies abroad will fail,” he said.

In a similar remark, Sheikh Jalal al-Din al-Saghir, a prominent leader in the Islamic Supreme Council, said Jan. 3 that “the current Saudi, American and Israeli obsession in Iran led to rebellion in some of the corners of the country.”

He added that these protests will not affect Iranian influence in the region, stressing that “the Shiite tide is on the rise in the region and will continue to rise culturally and politically, leaving no chance for others.”

Meanwhile, independent Shiite parties distanced themselves from the protests in Iran, considering it to be a domestic affair that would not affect their positions on Iraq's domestic affairs, regardless of the outcome of the protests.

The spokesman for prominent Shiite cleric Ali al-Sistani did not address the protests in any statement. Similarly, Muqtada al-Sadr also remained silent on the events.

At the official level, the presidency and parliament did not make any statements to this effect, despite their different sectarian affiliation, in order to avoid being caught in the struggle between the major powers in Iraq, especially Iran, the United States and Saudi Arabia.

However, this did not stop Sunni parties from gloating in front of the Shiite parties allied with Iran.

“What is happening in Iran will weigh heavily on the parties linked to the Iranian regime and that adopt the concept of the velayat-e faqih,” said Atheel al-Nujaifi, former governor of Ninevah and a prominent Sunni leader, in reference to the Dawa Party, the Islamic Supreme Council and the Popular Mobilization Units.

Nujaifi called on Shiite parties to seize this opportunity to "recalculate their position and recognize that the Iraqi Sunnis are better [allies] to them than Iran.”

He also described the Sunni parties that are close to Iran as opportunistic, expecting them to turn on Iran as soon as its role in Iraq is weakened. “I am sure that the Sunnis who are after their personal interests by supporting the Iranian influence in Iraq will quickly change positions to this effect,” he added.

The protests will not affect the situation in Iraq and will not make any major change in the near future because of the ongoing Iranian influence in Iraq through different mechanisms. However, what is happening in Iran will undermine the Iranian position and that of its allies in Iraq in the long run.

The pro-Iranian Shiite parties have always called on the people to vote for them in order to create a mode of the velayat-e faqih in Iraq at the economic, social and security levels.

One ought to mention that the recent protests blemished the bright image of Iran as a developed, ever-growing and powerful state in the eyes of Iraqi Shiites. The protests showed the people’s anger and discontent due to poverty, deprivation and resentment toward the Iranian intervention in the region at the expense of the well-being of Iranians.

Amer Ibrahim, an Iraqi journalist, told Al-Monitor, “It is only normal that the escalation of the protests in Iran weakens the argument of the pro-Iranian camp in promoting the model of velayat-e faqih in Iraq, which is portrayed as a divine and shining example.”

The protests also emerged following the publication of articles in the Iranian budget allocating funds to non-elected political and cultural parties, and in some cases to parties linked to non-Iranian institutions. Thus, it will be difficult for the Iranian regime to continue spending generous amounts on its allies in Iraq, Syria, Lebanon and Yemen, among others, which will affect the political influence and stability of pro-Iranian parties.

Ibrahim stated that “the public outrage over the role the Iranian regime has been playing in the region will echo in Iraq, which affects pro-Iranian parties in Iraq as well as armed groups affiliated with religious parties. These protests may also affect the flow of financial and military support to these parties.”

Although the protests are not expected to bring about radical change in Iran's influence over Iraq, this could be the beginning of the end for the ever-increasing Iranian influence since the fall of the former regime.