Some Turks have complained about the ramped up security around New Year's Eve, but the authorities have every reason to go into prevention overdrive after last year's nightclub massacre. 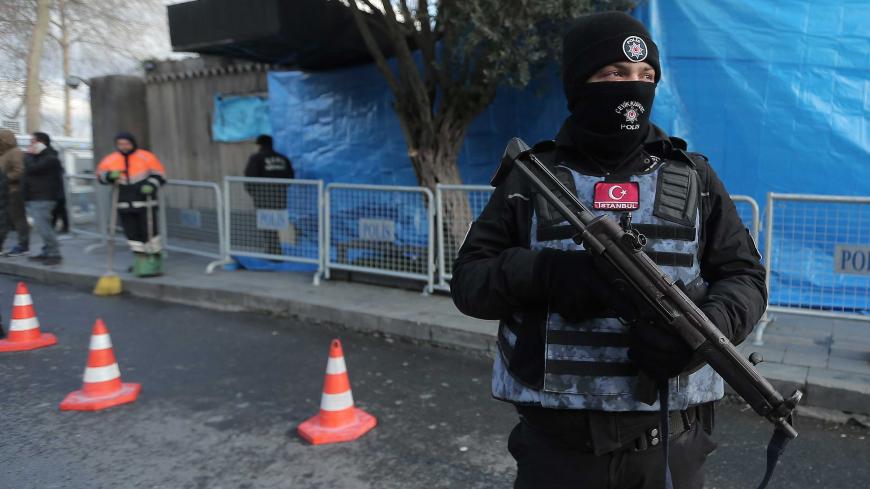 Turkish police stand guard outside the Reina nightclub after an attack by a gunman, in Istanbul, Turkey, Jan. 1, 2017.

As New Year’s Eve approaches, Turkish counterterrorism units have intensified their hunt for suspected jihadis in a bid to pre-empt carnage like that unleashed by an Islamic State (IS) shooter at an Istanbul nightclub during holiday reveling last year.

Police detained a total of 120 individuals, including Syrian and Iraqi citizens, suspected of links to IS. The sweeps stretched from Istanbul and as far east as Van on the Iranian border, where 22 people were detained and materials purportedly exposing their ties to the jihadis were seized, Hurriyet Daily News reported.

Last year, 39 people, many of them Arab tourists, died when a lone gunman rained bullets on them at the elite Reina nightclub on the Bosporus. The trial of a total of 57 suspects, including the confessed assassin, Uzbek-born Abdulkadir Masharipov, began on Dec. 11 and adjourned on Dec. 16. It's set to resume March 26.

Istanbul Gov. Vasip Sahin assured citizens that this time around, all necessary measures had been taken “for our citizens to spend New Year’s Eve in the best way possible.” He said 37,000 police officers and 4,000 gendarmerie personnel would be deployed across the megalopolis to ensure that celebrations were peaceful. They may also be somewhat less joyful, as authorities banned celebrations in the city’s central plaza Taksim, where oft-inebriated revelers traditionally congregate to ring in the New Year.

The Sisli district, which is run by the pro-secular Republican People’s Party and is home to many members of Istanbul’s miniscule community of non-Muslims, has followed suit. Festive lights and ornaments strung up across buildings and public spaces have also been dismantled, prompting grumbles. “Is there an expectation of a terror attack on lights?” asked journalist Engin Bas in a characteristically caustic tweet. Many secularists believe that Turkey's Islam-rooted government is only too happy to squelch New Year's festivities, which are frowned on by Islamists for being "Christian."

But the authorities have every reason to go into prevention overdrive. IS operatives are believed to maintain a presence in Turkey, which has an 800-kilometer (500-mile) border with Syria and until 2015, when the authorities began cracking down in earnest, was the main transit route for foreign fighters crossing into their now collapsing caliphate. Turkey has erected a forbidding cinder block wall that runs nearly the length of the border to keep Islamist and Kurdish militants out. With the help of Western governments, it has also installed sophisticated equipment to snare would-be illegals on the border.

Still, the seepage continues, according to a recently published investigative report by Mike Giglio for the online news portal BuzzFeed. Giglio wrote, “Smugglers working in the human-trafficking networks that run between Syria and Turkey say that, for much of the last year, a steady stream of [IS] members and their families managed to sneak into Turkey," and "One of the smugglers said they had forged Syrian passports for some of the [IS] men to enable them to travel deeper into Turkey.”

This week, the Times of London claimed based on its interview with a Syrian Kurdish official that some 300 UK-born fighters had crossed into Turkey from Syria. British tabloids eagerly swooped on the story to make further sensational claims about how these “sleeper cells” would probably target British tourists.

One of the biggest challenges facing Turkey is that it is home to over 3 million Syrian refugees, making it that much easier for the militants to melt into their midst. And it is no secret that until 2015, when Turkey decided to formally join the US-led coalition’s battle against them and to open its air bases to coalition operations in Syria, IS recruiters operated relatively unhindered across Turkey.

Still, for all the darkness descending on Turkey, literally and otherwise, secular-minded Turks are apparently determined to have some fun and are getting ready to don red underpants on New Year’s Eve, a widespread tradition that is meant to bring the bearer good luck. According to the president of Turkey’s Undergarments Industrialists Association, business is booming this year. “The underwear sector is preparing very actively for this New Year, as every year,” declared Osman Alyuz in an Oda TV interview.

And they're not just for the ladies. Shop windows in the Black Sea city of Samsun boasted male mannequins sporting crimson G-strings with white bows naughtily perched on the center. Store owner Nurcan Goncal was quoted by the mainstream daily Sozcu as saying men’s interest in red underwear has been growing every year.