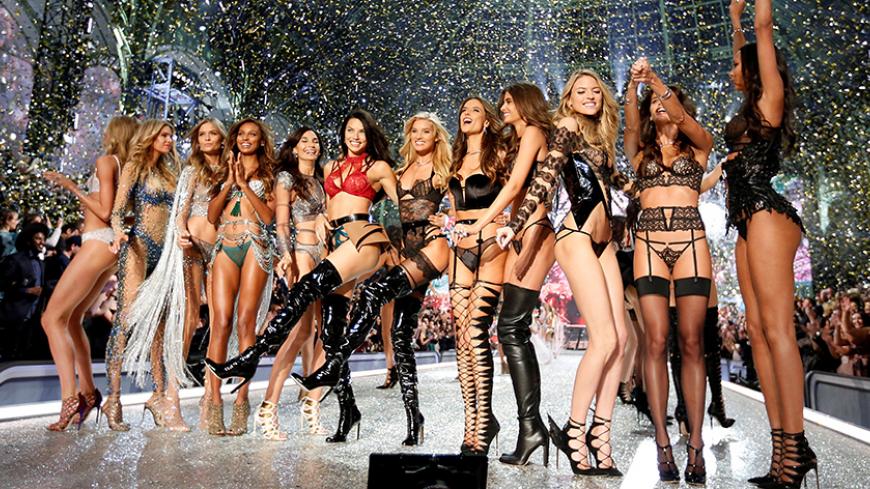 Models celebrate at the end of the 2016 Victoria's Secret Fashion Show at the Grand Palais in Paris, France, Nov. 30, 2016. - REUTERS/Charles Platiau

With their panties apparently in a bunch, Turkish regulators want to shove Victoria's Secret back in the closet.

The Radio and Television Supreme Council (RTUK) recently fined NTV and Star TV channels for running the lingerie maker's annual fashion show as part of their New Year’s Eve programming in a time slot when youngsters were likely to be watching. The RTUK was particularly concerned that such shows could harm children's “physical, psychological and moral development.”

The fines came after an Ankara city employee, Muhammed Mahmud Otegen, lodged a complaint with authorities, describing the show as disturbing to children and families. “This show, with Victoria’s Secret models with their outfits and dances, is inappropriate.”

But the RTUK said it was also concerned about the country's image. Before the show started, the stations had run a short commercial in which the models were shown dancing to Middle Eastern tunes and a commentator said, “Tradition continues: Victoria’s Secret New Year’s Eve fashion show.” In explaining its decision, the RTUK wrote, “The commercial, with its use of traditional tunes and models in lingerie, [made it look like] watching lingerie shows on New Year’s Eve is a Turkish custom.”

For decades, there was debate over whether belly dancers could appear on TV. In the past couple of years, the cultural arguments shifted and became no longer about propriety, but about whether traditional belly dancers or the angels of Victoria’s Secret were the better way to welcome the New Year.

Social media users were perplexed by the RTUK's decision, since shows of this type have been a tradition for almost two decades in Turkey, with the Victoria's Secret fashion show itself running for 13. Several commentators argued that the shows have indeed replaced traditionally shown belly dancers.

Turkey's lingerie traditions run much deeper than Islamists in the ruling Justice and Development Party (AKP) would have people believe.

For example, wearing red underwear on New Year’s Eve has become a common urban tradition in Turkey for both men and women. Although no one seems to know why and how the trend began, Al-Monitor set out to investigate by visiting the lingerie district in Istanbul between Covered (Grand) Market and Spice Market, a shopping district known for its wholesale connections where each street specializes in one product. Ali, a 50-year-old shopkeeper, said, “Every December we specifically order red underwear. Even women older than me now come asking for it. It is not just for themselves, but also for men. Exclusively for December, we bring in men’s red boxers. I think it is superstitious. However, we even have veiled customers asking for the red underwear for New Year. They believe it will bring love and joy.”

This shopping district attracts people from all over Turkey who are observing landmark events of life: henna nights, engagements, weddings and circumcisions. As friends and I sip tea in Ali’s store, eight women come in together. They appear to range in age from about 20 to 70. Soon, we learn this is a shopping trip for an engagement party. They are here to get lingerie for the bride-to-be, which will be paid for by the mother-in-law and other female members of the groom’s family.

Ali’s daughter explained the situation after the women left. “Initially, both sides are shy. They look at really conservative bras and undies. Then someone breaks the ice, and I introduce more appealing and exciting options. We sell a good amount of babydolls [peignoirs]. G-strings used to be quite fashionable in the 1990s; that isn't the case anymore. Sometimes, the brides will say 'yes' to their prospective mother-in-law’s choices, then after the wedding, they bring in the goods to exchange them for items more to their own tastes. Rarely do the elders say 'Please pick whatever you prefer' to the brides."

Another lingerie vendor, Osman, whose brother is in the business of henna nights and engagement parties, told Al-Monitor, “The latest trend [includes] Viagra, special condoms, [aphrodisiacs] and even hair-growth shampoos. As men are getting married for the second or third time in their 40s or 50s, we see really bold choices.” Osman added that sometimes in polygamous settings, a first wife assumes the role of mother-in-law to help the second wife experience the wedding ceremony. Polygamy is not legal in Turkey, but members of the burgeoning Islamic upper class are able to buy a traditional wedding ceremony without the legal marriage certificate.

Although the RTUK might argue that the Victoria’s Secret fashion show is not a Turkish tradition, undergarment production is a crucial part of Turkey's textile sector, particularly for export. For example, a detailed official report from 2005 ranked Turkey as the world’s No. 3 lingerie producer. This includes stockings and bathing suits as well as undergarments. Of Turkey's textile production, 36% falls under the category of underwear and about 80% of exports are to the world’s major brand names, including Victoria’s Secret. In a 2014 report, Turkey ranked No. 10 among undergarment-exporting countries. In 2016, government publications bragged about Turkey's fast-developing undergarment sector.

Al-Monitor spoke with three more upscale designers and vendors, most of whom have been in the business for three or four generations. In the past decade, these vendors concurred, the hashema — or burkini, a bathing suit that meets Islamic dress codes — has gained incredible popularity. One vendor said, “We did not even know what it was 15 years ago.” In line with the hashema came other conservative female bathing suits — those with little skirts and cuts that emphasize more coverage than cleavage. But with underwear, conservatives have “always been more extravagant and willing to splurge,” a designer said. “They are more willing to try new styles — explore warm and vibrant colors.”

These vendors were not surprised that the RTUK fined the channels for airing the Victoria’s Secret fashion show, and they believe restrictions will only become tighter. Their experiences with billboards have shown them in the past decade that, progressively, lingerie and swimwear billboards have become imageless. You can no longer have a woman in a swimsuit posing for a brand. One of the designers said, "Only the images of an almost 80-year-old pop singer [Ajda Pekkan, 71, known as the Turkish Cher] were found acceptable to be displayed in swimsuit commercials inside the store.” Indeed, these upscale vendors say younger generations either shop online or abroad.

In the meantime, we see further restrictions and bans on petty issues, as the number of regulations on cultural, personal and private matters increases at a head-spinning rate. Sexy lingerie, just like alcohol and taverns, is not officially banned but gets pushed out of the public's eye.

It's not surprising that the origin of the complaint was a city worker from AKP-controlled Ankara. In 1994, Ankara Mayor Melih Gokcek notoriously removed the statue of a naked woman from a public exhibit while uttering one of the most haunting sentences in Turkish cultural politics: “I spit on such art.” Gokcek is still mayor, and since 1994 his administration has continued to spit on Turkish art and culture while redefining what is acceptable in Turkish customs and traditions. So their judgment of what is "traditional" should be taken with a grain of salt.