Torture is still rampant in Tunisia 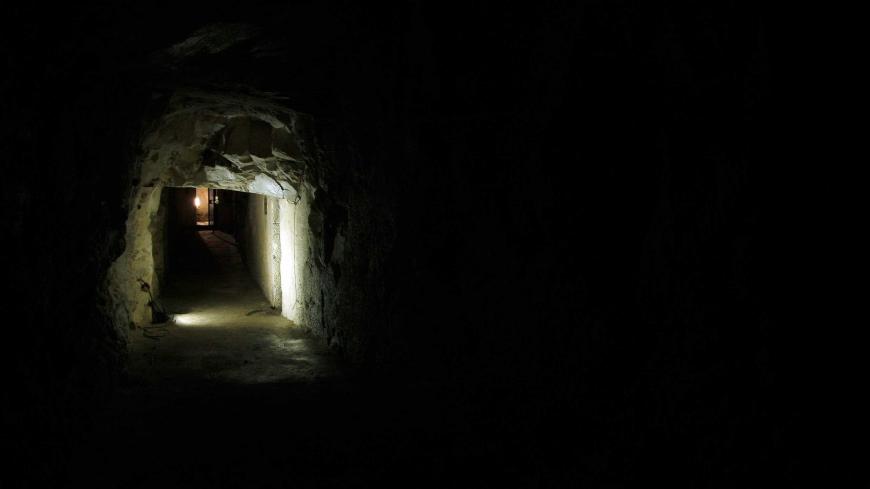 A view of one of the caves located inside the notorious prison of Ennadhour in Bizerte, Tunisia, April 29, 2012. - SALAH HABIBI/AFP/GettyImages

On Dec. 11, only one day after the 69th anniversary of the UN General Assembly proclaiming the Universal Declaration of Human Rights, a young man who was held at the Tunisian National Guard Center, a semi-military apparatus in El Aroussa town in Siliana governorate, faced a horrible death. The Ministry of Interior issued an official statement Dec. 11, saying, “The victim committed suicide [by strangling himself] with a thread from his coat.”

Despite the statement, the incident sparked wide protests in the town and led to clashes between the inhabitants and policemen. It seems torture is far from dead in Tunisia since the Jan. 14, 2011, revolution.

Monzer al-Sharni, the general secretary of the Tunisian Organization Against Torture, told Al-Monitor, “The horrible death at the Tunisian National Guard Center in El Aroussa proves that torture persists in Tunisia. Witnesses said the victim was tortured before his death. We do not know if he committed suicide or died after being tortured. The autopsy will show the results, but he was certainly beaten. The witnesses gave written testimonies to the judiciary and said they would hear the victim calling for help. We recorded other cases in Kram suburbs, north of the capital, and in Raf Raf city in the north also.”

In a related context, Fathi Jaray, the director of the National Prevention Against Torture Authority (INPT), a state institution, said in statements to the local radio station Jawhara Dec. 14, “The mistreatment and torture practices are ongoing in jails and detention centers.”

Mokhtar al-Tarifi, the vice president of the World Organization Against Torture, an international alliance of nongovernmental organizations, told the Tunisian Mosaic station Oct. 4, “Torture has resurfaced in Tunisia with the impunity of guilty people. Despite numerous complaints, the Tunisian judiciary has not issued any verdicts admitting to torture. Chapter 101 of the Tunisian Criminal Code punishes any civil servant who tortures another individual with eight years in prison, should they remain in their position.”

Sharni added, “As rights organizations, we have documented many torture cases in detention centers, and we are sure that mistreatment, torture and violence continue to happen in these centers. The government is not doing enough to stop this dangerous phenomenon. Impunity and refraining from holding the implicated individuals accountable are rampant. Such cases have sparked angry public protests, as people no longer accept human rights violations. This is a clear message to the authorities to stop the abuses and punish those responsible.”

He continued, “I think that the numerous rights organizations in Tunisia condemning torture have curbed the phenomenon to a large extent. But these organizations are fighting campaigns from government-affiliated media outlets that want to distort their work. The battle for human rights and restoration of citizens’ dignity is a long one, and we will keep fighting.”

It seems that the state of emergency in the country in place since November 2015 — in the wake of a bombing that targeted a presidential security vehicle in the capital of Tunis, killing 12 security officers and wounding 14 others — has given wide privileges to the security institution as per the law organizing exceptional states of emergency. Civil society concerns about the situation of freedoms and human rights have only multiplied ever since.

Meanwhile, the Ministry of Interior proposed in 2015 a bill on the “repression of offences against armed forces” to be discussed in parliament. The bill gives the security forces the right to use lethal force against potential attackers. Amnesty International considered this bill “a dangerous step toward institutionalizing impunity in Tunisia’s security sector.” Human Rights Watch, for its part, called on the Tunisian parliament to abort the bill.

However, during a meeting with INPT members, presidents of similar committees from 17 countries, and representatives of international and regional organizations active in the field of human rights and rejection of torture, Tunisian President Beji Caid Essebsi said Dec. 15, “Systematic torture no longer exists in Tunisia. The documented cases result from individual errors that authorities will follow up on, regardless of the abuser’s identity. We are willing to fight torture, which existed in the past.”

In the recent past, before the fall of Zine El Abidine Ben Ali’s regime in 2011, Tunisia was among the countries that violated human rights the most. Hundreds of torture cases were documented in its prisons, and dozens of people were killed.

Sharni noted, “In fact, forms of torture before the revolution were more savage and included whipping, iron combing and nail clipping, but today, they are restricted to beating, psychological terror and intimidation. Also, people have more freedom to talk about torture and expose its practices. We can now lodge complaints that the judicial authorities accept. Unfortunately, many cases remain uninvestigated, and we are not pleased with the accountability process. Impunity is rampant, and the verdicts against those accused of torture crimes are rare.”

Despite the miles that Tunisia has crossed in the fields of human rights, gender equality — especially after the approval of laws allowing Muslim women to marry non-Muslims and equality in distributing the inheritance — freedom of the press, freedom of expression, and promotion of economic, social, environmental and democratic rights, relations between the security forces and citizens remain shaky. Although torture, mistreatment, and physical and verbal abuse in jails and detention centers have relatively decreased, they still go on seven years after the revolution.

The government is facing a key challenge to reform the security institution. The current failure to reform the security sector constitutes the worst setback in the transitional process from a dictatorship to a pluralistic democracy after Ben Ali’s 2011 departure and might have serious repercussions for the social situation. Citizens now enjoy a wider space of freedom to protest against violations, especially torture, and they will not settle for the role of the silent victim anymore.