With the help of Turkish trainers, the first batch of policewomen graduated from the opposition’s National Police and Public Security Forces in the areas liberated during Operation Euphrates Shield in the countryside of Aleppo. 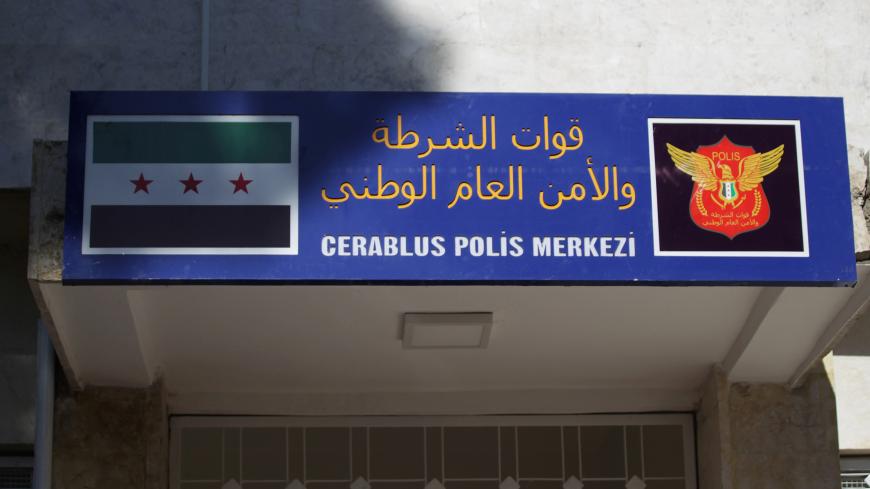 A sign showing the Free Syrian Army flag (L) and a logo of the "Free Police" is seen in the border town of Jarablus, Syria, Jan. 24, 2017. - REUTERS/Khalil Ashawi

ALEPPO, Syria — Women wishing to join the opposition police in the areas liberated during Operation Euphrates Shield will be offered a second training course early December in the city of al-Bab, Mahmoud Ahmed, a police officer at al-Bab police station, told Al-Monitor.

The opposition’s National Police and Public Security Forces in the liberated areas announced Oct. 22 the graduation of 90 policewomen who completed a 21-day training course in a police camp near the city of Azaz, close to the Syrian-Turkish border in the liberated areas, which are under the control of the Free Syrian Army (FSA).

As soon as their graduation leave was over on Nov. 1, these female officers started working in police stations across Azaz, Marea, Suran and Akhtarin.

Ahmed Zeidan, the Azaz police chief and director of the women's police training center, told Al-Monitor, “This is the first batch that graduated in the liberated areas. We started accepting women on Aug. 1 because we are in dire need of policewomen in these areas. Women between the ages of 18 and 35 took a medical and fitness test, and they received a 21-day intensive training course in the detection of criminal offenses, thefts and drug-trafficking operations. They were taught also how to use weapons and search people.”

He added, “We resorted to Turkish police trainers to benefit from their techniques and have them share their expertise with the women. It was a successful experience despite the short period of time the women were given.”

Zeidan noted that Turkey supervises the National Police and Public Security Forces in the liberated areas, and it pays the salaries of the police officers and its members. It provides them with weapons and armored vehicles, and it covered the cost of the women's police training course in Azaz.

Since the beginning of 2017, Turkey has trained and covered the salaries of more than 5,631 policemen in Syria.

“The involvement of women in the police and security forces is paramount at the security and Sharia levels, as these women can help us avoid potential security breaches by [other] women. There have been cases where people dressed in female clothes managed to escape from the police because according to Muslim customs, traditions and religion, men are not allowed to touch or search women,” Zeidan said.

The National Police and Public Security Forces were established in early 2017 in the liberated areas under the auspices of Turkey, which trained these forces on its territory. The first batch of police forces entered the FSA-controlled city of Jarablus Jan. 24, followed by other batches that spread to cities in the liberated areas.

On March 1, a police force started working in Azaz after receiving a training course in the Turkish city of Mersin, and a police force entered al-Bab on April 26. But none of these forces included women.

Amani Mohammed, 20, is a veiled police officer who graduated from the women's police training course. She joined the traffic police department in Azaz after she finished the course. Like her colleagues, Mohammed wears a gray coat and carries a handgun.

“I did not expect to like this profession the way I do now. It has turned out to be very suitable for me despite some downsides that include night shifts. I joined the police because I love this profession, which allows me to offer a great service to the community,” Mohammed told Al-Monitor.

“We search women at checkpoints and centers affiliated with the traffic police department, and we refer them to prison if need be,” she added.

Mohammed married when she was 18 and has a daughter. However, her marriage only lasted a few months and she got divorced a year and a half ago. While looking for a job, she heard about the women's police and she applied.

“This job offers me a good income to provide for my little girl. I do not need my father's or my ex-husband’s help to raise her. My job here has helped me socialize and it helped me get over the experience of a failed marriage,” Mohammed noted.

Zeidan told Al-Monitor that in early 2018, the police command will grant a military rank to policewomen who have a bachelor's degree and who are ready to join the officer training course.

Muna Sheikho, a policewoman who works in the criminal police department, told Al-Monitor at the police department in Azaz that she aspires to receive a military rank and is looking to take part in more training courses, even if this requires her to travel to Turkey to undergo specialized training.

Wael Khatib, the head of the traffic police department, told Al-Monitor, “We take into consideration the conditions of married women who work in the police force — they are offered a convenient schedule and are granted maternity leave.”