Two engineers from the Gaza Strip are preparing to launch an app where patients can communicate with doctors from the Palestinian territories and other countries. 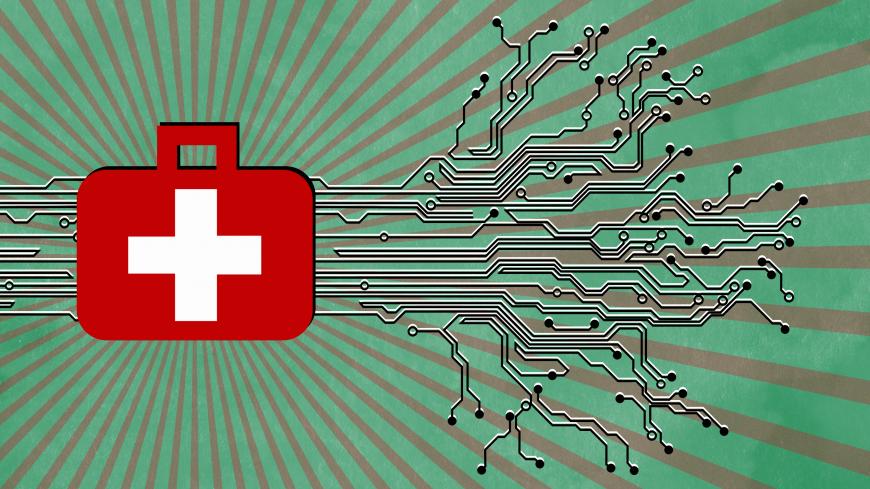 GAZA CITY, Gaza Strip — Engineers Suleiman al-Lawh, 25, and Tasneem al-Sheikh Khalil, 24, are about to launch an online medical consultation app called Al-Mosheb (The Scientist). The app allows patients to communicate with specialized doctors in the health and psychology fields online in return for a fee.

A pilot app was launched Nov. 1 on Google Play for smartphones, allowing its subscribers in the Gaza Strip to communicate with 120 doctors in the fields of psychological and physical health through text messages, video calls or voice calls, and to attach medical tests or prescriptions.

Lawh, who came up with the idea, told Al-Monitor that the program aims to facilitate communication between patients and doctors through technology, allowing patients to contact any doctor of their choice from the list and get a medical consultation without the need to be present at the clinic or hospital.

“We have contracted 120 doctors from the Palestinian territories, Egypt and India, who have at least 20 years of experience in their field of expertise. Each of them pays our company $20 [per month] to be featured on our list. The doctor then determines the price of his consultations, taking into account that we take [a commission of] 16% per consultation — to which the doctor agrees in advance,” he said.

According to Lawh, some doctors charge $20 per consultation, while others ask for less.

He noted, “Al-Mosheb is an Arabic word meaning the scientist who knows three sciences and excels in all three. [Persian scholar Muhammad ibn Musa] al-Khwarizmi is an example in Islamic history, as he excelled in geography, mathematics and astrology. Consultations in this program are restricted to the medical field. In the future, we will provide a platform for legal consultations.”

Lawh said, “The participating doctors in the program came up with and answered 10,000 general medical questions that they themselves determined based on their experience, and they will be included on the research list of the website gradually at the beginning of the year. The official launch of our online version with paid services will start in January 2018.”

He noted that PayPal and points of sale at the different call centers will be available in early 2018, which will allow participants to buy a program balance that pays for the consultations electronically.

Lawh, who has launched two pilot apps in the past — an encyclopedia app for Palestinian poets and an app for weight loss diets — is in the process of obtaining a permit for his online company from the Palestinian Ministry of National Economy and the Ministry of Telecommunications and Information Technology. He said that the website does not support ads and will make a profit from the monthly $20 subscription fee for doctors and the 16% patient consultancy fee.

While Al-Mosheb’s key team is Lawh and Khalil, who developed the general idea and oversaw the programming, the company relied on 200 others to help with development in two stages. The first stage was the inception and preparation of the pilot app and the consultation with international technology investment experts. The first phase lasted four months.

Lawh said, “The second phase lasted five months, during which the medical consultants were pooled and the general questions were set. We then launched the pilot version on Nov. 1, which allowed subscribers to give their feedback. We took this into consideration when developing the final version, which we will launch in January 2018.”

The general feedback of the pilot version on Google Play praised the application and considered it an optimal way to get medical advice without the need to book an appointment at a clinic or hospital, wasting time and effort. It also allows subscribers to communicate with Arab doctors from Egypt and India, for instance, to show their test results, X-rays and the medication they take to get a recommendation, especially when Gaza’s doctors do not have the expertise due to lack of capacities.

Most assessors of the pilot version rated the app 4 or 5 out of 5, which Lawh considered satisfactory in order to continue working on the online paid version and avoid mistakes related to the search for doctors and frequently asked questions on the app.

Dermatologist Iyad al-Mbayed, one of the doctors listed in the program and who works at Quds Hospital in Gaza City, told Al-Monitor, “The app allows me to communicate with patients faster and it is similar to an e-clinic, minus the patient queues.”

He added, “Many patients — especially women in Gaza — are embarrassed to see a dermatologist if they catch an infection in a sensitive part of the body or if their injury causes social shame, such as scabies. The app has a high level of privacy as people can ask questions anonymously and it allows patients to check back with the doctor without having to visit the clinic.”

Mbayed said, “There is a global inclination to offer all services online, and the online consultancy market is known around the world. I am excited to be a part of Al-Mosheb program app to try this new type of online service in Gaza and offer my medical expertise to a large number of subscribers.”

Although there aren’t many electronic apps for consultative services in the Gaza Strip, Lawh and Khalil are betting on people’s needs for such apps. Al-Mosheb resembles a health facility without the need to book a ticket or wait in line for hours.