Trump’s Jerusalem proclamation: A blessing or a curse?

With the erosion of US deterrence under Donald Trump, Prime Minister Benjamin Netanyahu is taking a huge risk by gambling on him for Israel's security. 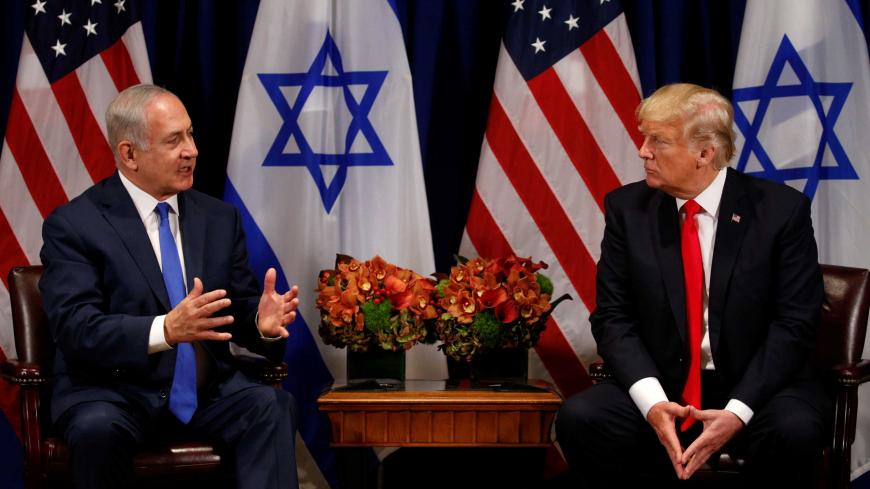 “Benjamin Netanyahu has chalked up a genuine diplomatic accomplishment,” opined a senior Haaretz pundit about Israel's prime minister after US President Donald Trump’s Dec. 6 declaration recognizing Jerusalem as Israel’s capital. Not only has the focus shifted from the police investigations embroiling Netanyahu, he noted, “It has moved to the prime minister’s comfort zone: the political-security arena.” As the headline for a report of Trump’s pronouncement, News 1 proclaimed, “Tremendous achievement. Netanyahu knew what he was doing.” A respected journalist at Globes waxed poetic, proclaiming, “Netanyahu’s Jerusalem of gold.” She also wrote, tongue-in-cheek, “Despite being suspected of corruption, the prime minister hasn’t stopped working and won’t let anyone take away his credit on Jerusalem.”

Netanyahu rushed to leverage the presidential prize, calling on other countries to follow Trump’s lead, stating, “The president's decision is an important step toward peace.” How, exactly, one might ask, is a unilateral move on such a controversial issue a boon for peace? “It connects everyone to reality,” the peace expert explained.

Not only did no major international players follow in Trump’s footsteps, 14 of 15 UN Security Council members voted against him. European Union foreign policy chief Federica Mogherini suggested to Netanyahu that he forget about a change in the EU’s position on Jerusalem as long as Israel does not reach agreement with the Palestinians regarding the city’s status. On Dec. 21 in the UN General Assembly, 128 members voted to reject US recognition of Jerusalem as the Israeli capital. Only seven non-influential countries — Guatemala, Honduras, the Marshall Islands, Micronesia, Nauru, Palau and Togo — voted with the United States and Israel against the resolution.

The sweeping rebuff of Trump’s proclamation reflects the failure of Netanyahu’s diplomacy in his dual role as Israel’s prime minister and foreign minister. The futility of his attempts to turn Asia into a base of Israeli support as an alternative to Europe has been exposed.

Barely six months after Netanyahu took a friendly walk on the beach in Haifa with Indian Prime Minister Narendra Modi, and a month before Netanyahu was due to take a break from police questioning and pay a reciprocal visit to India, New Delhi voted for the Jerusalem declaration at the United Nations. Just nine months prior, Netanyahu had traveled to Beijing and declared that Israel and China were a “match made in heaven.” China, too, voted in favor of the UN resolution. Less than a year after Netanyahu began a visit to Singapore by describing the two countries as “kindred spirits,” the city-state also turned its back on Israel at the UN.

The UN votes were primarily intended as a poke in the eye for Trump. The man on whom Netanyahu is betting Israel’s security is losing the trust of world leaders. Since his inauguration almost a year ago, Trump has validated the adage, “With friends like this, who needs enemies.” Investing Israel’s strategic assets in Trump is as risky as investing in bitcoin. The Jerusalem declaration torpedoed the “ultimate deal” touted by the Trump administration to revive Israeli-Palestinian negotiations on a two-state solution to the Palestinian-Israeli conflict and accelerated Israel’s disastrous slide into a binational Jewish-Arab state or an apartheid regime.

Netanyahu is obviously not concerned about the prospect of Israel having to choose between its Jewish identity and democratic principles. On the contrary. The announcement by Palestinian President Mahmoud Abbas that he was pulling out of the peace process is simply additional fodder for Netanyahu’s claims that the Palestinians are the ones who don’t want peace. At the weekly Cabinet meeting held Dec. 24, Netanyahu cited Trump’s assertion that “the root of the general conflict in the Middle East does not lie in Israel, but in Iran and in radical Islam and the terrorism that it inspires.” Anyone with integrity and powers of observation cannot deny this distinction, according to Netanyahu.

In a clear reference to Netanyahu and some of his associates, former Defense Minister Moshe Ya’alon said at a Dec. 23 anti-corruption demonstration in Jerusalem that corruption “is a bigger danger than the Iranian threat, Hezbollah, Hamas or [the Islamic State].” The threat of violent fundamentalism spreading from Iran to Israel’s close neighbors should not be discounted, but how does our friend Trump put Iran in its place? He hands the hot potato to Capitol Hill. Where were Netanyahu’s friends in Congress on Dec. 12, the day on which US lawmakers were supposed to propose new sanctions on Iran? Netanyahu’s buddies “forgot” about it. Perhaps they were busy swearing allegiance to Jerusalem.

The series of UN defeats and the Palestinians' blatant rejection of a US diplomatic role in the region are additional indications of the erosion of US deterrence under Trump. They join the ongoing provocations by North Korea and the Russian and Iranian takeover of what is left of Syria. America’s enemies in the battle for global hegemony, among them Russia and China, are celebrating the United States' downfall in the international arena. The world powers that signed the Iran nuclear deal have already announced they will stand by the 2015 agreement even if Trump makes good on his threat to walk away from it.

Israel’s utter devotion to a president with an itchy trigger finger whose gun is loaded mostly with blanks also erodes Israeli deterrence. To whom will Israel turn if Trump and the US Congress decide to ignore the Iranian threat and adhere to the nuclear agreement? Will it turn to India or China? To Moscow or Singapore? Well, there’s always Micronesia. We will always remember Guatemalan President Jimmy Morales, who last week ordered that his country’s embassy be moved from Tel Aviv to Jerusalem. In a worst-case scenario, Israel could withdraw from the International Atomic Energy Agency, and if the United Nations fails to mend its ways, Netanyahu may be forced to leave that organization, as he did last week with UNESCO.

The next time Trump decides to give Netanyahu a gift like the Jerusalem declaration, let’s not rush to pop open the champagne. Let’s first carefully remove the wrapping paper and closely examine the contents of the package. It could turn out to be a bomb.