Could settlers stay in a future Palestinian state?

The violence by settlers against Palestinian farmers indicates why settlers cannot stay and live inside a future Palestinian state. 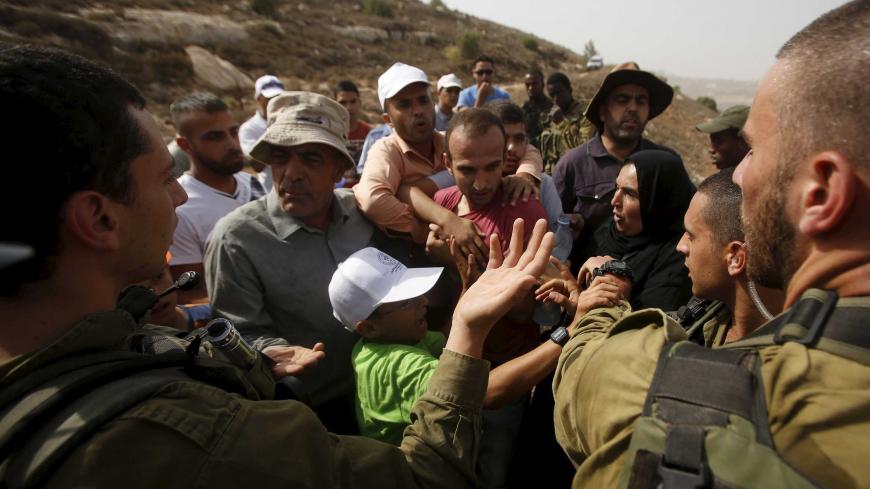 Palestinians argue with Israeli soldiers after Palestinian farmers said they were stopped by Israeli army and settlers from working in their farm land in Halhul town near Karme Tzur settlement, north of the occupied West Bank city of Hebron, Sept. 11, 2015. - REUTERS/Mussa Qawasma

The New York Times reported Dec. 3 that the new peace plan being hammered out these days by the White House would include an option enabling Jews to live under Palestinian sovereignty. US President Donald Trump already said back in February that as far as he’s concerned, “I am looking at two-state, and one-state, and I like the one that both parties like.”

Israeli Prime Minister Benjamin Netanyahu has occasionally demanded in his speeches that Israel’s West Bank settlements be left in place within the framework of a permanent arrangement with the Palestinians, and the issue has even been brought up in negotiations with the Palestinians. Even the leader of the opposition Zionist Camp faction, Avi Gabbay, said, “If you make a peace deal, you can find solutions that do not require evacuating settlements.” If Arab villages can exist in the heart of the State of Israel, the political right argues, why should the future Palestinian state be “Judenrein” (free of Jews, in German)? So, in fact, why not one state for Jews with a Palestinian minority and another state for Palestinians with a Jewish minority?

The tragic Nov. 30 incident in the northern West Bank provides a relevant answer to this logical question. Several dozen residents of the Palestinian village of Kusra hurled stones at a group of two dozen Israeli youths and armed adults accompanying them who were marching on the outskirts of the village, slightly injuring two of them. One of the escorts opened fire and fatally wounded Kusra resident Mahmoud Zael Odeh.

Clashes broke out between Palestinians and Israeli troops following the shooting. Two soldiers and six Palestinians were injured. The head of the Kusra village council, Abed Alazim Wadi, told Haaretz that settlers took advantage of the troops’ presence to damage property and homes in the village. It should be noted that the word “settler” is not synonymous with “violent.” For example, following is a report received by Ossim Shalom, a pro-peace organization of social workers, from Moris Shoshana, a resident of the settlement of Migdalim, adjacent to Kusra:

“I have been living here for 27 years. I have gone into the village hundreds of times and nothing has ever happened to me and I never sensed danger. Some four years ago, during a terrible snowstorm that cut off all roads and power, our friends from Kusra came with snow plows and opened up the roads for us. Even at the time of the [second] intifada [2000-2005] we lived in relative peace. This morning, some youths from the settlement of Yitzhar showed up, accompanied by a few armed adults. They decided to undertake a bar mitzvah 'hike,' going armed into the village with only one goal in mind, to create a provocation.

“I read in the news that the youths were attacked by 'terrorists.' This is a complete lie. It pains me to see good people, with whom we enjoy such good neighborly ties, depicted as monsters because some radical 'hilltop youths' [nickname for radical-right youth settlers] entered their home with the sole intention of setting off war. It’s too bad that good people suffer because of warmongers. This is an amazing area and it’s a pity that radicals are destroying the quiet life enjoyed here by both Palestinians and Israelis.”

Indeed, many among the Jews who live in the West Bank live peacefully with their Palestinian neighbors. They rail against those who disrupt their “quiet lifestyle” in the pristine nature where they have chosen to raise their children. This lifestyle is similar to the relationship between a horse and its rider. Will the resident of Migdalim still want to remain in that “amazing area” if the rider and horse change places and the settlement is handed over to Palestinian sovereignty?

Kusra made headlines because the latest clash there resulted in a fatality. However, such conflicts are routine. The only ones who assiduously document them and make them public are the researchers of the UN’s Office for the Coordination of Humanitarian Affairs. Their latest report, spanning the period Nov. 7-20, provides an idea of the “coexistence” between Palestinian West Bank residents and the Jewish minority whose devotion to the biblical Land of Israel is stronger than their allegiance to the modern-day State of Israel. Following are some incidents the report describes:

A group of Israeli settlers threw stones at Palestinian farmers from Urif village who were harvesting their olives, injuring two in the head. Following the incident, another 40 Palestinian families farming in the area were ordered to leave their fields. In two other incidents, settlers reportedly harvested olive trees belonging to Burin Palestinian village farmers and stole a donkey belonging to farmers from the village of Jit. A number of additional incidents involving stone-throwing by settlers at Palestinian farmers were also reported. Groups of Israeli settlers entered, under the protection of Israeli forces, religious sites in Palestinian areas, triggering clashes that ended without injuries.

Following the shooting death of the Palestinian resident of Kusra, Defense Minister Avigdor Liberman wrote on Facebook that “the use of weapons for self-defense is a moral value protected by the law in every democratic society.” When these democratic values apply to an independent Palestinian state, the Palestinians will be the ones to decide whether they want armed Israelis wandering among them with weapons. Absent the right to bear arms, it would seem that even the Liberman family from the West Bank settlement of Nokdim would prefer to emigrate to the Jewish state.