Erdogan draws red line over US Embassy's move to Jerusalem

Turkish President Recep Tayyip Erdogan is threatening to sever ties with Israel if the United States moves its embassy to Jerusalem, positioning himself as a global defender of Islam at the risk of further tension with the West. 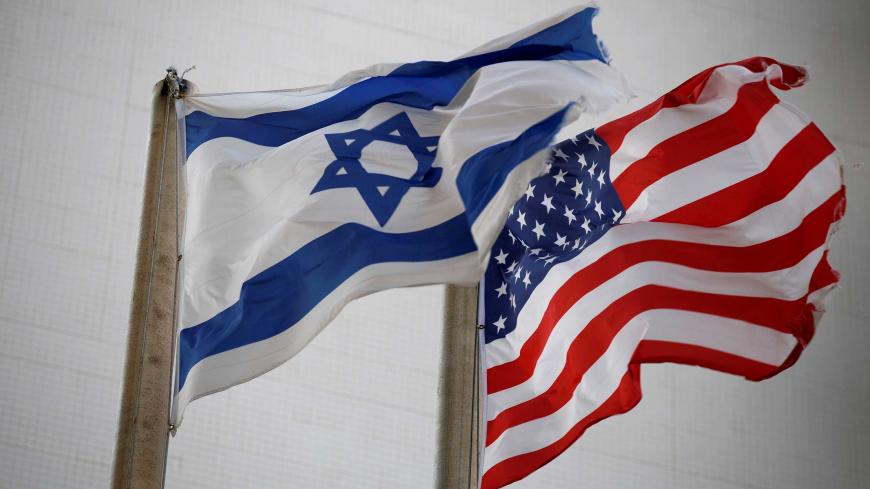 The American and the Israeli flags fly outside the US Embassy in Tel Aviv, Israel, Dec. 5, 2017. - REUTERS/Amir Cohen

Turkey’s president has threatened to sever ties with Israel if the United States recognizes Jerusalem as the capital of the Jewish state. Recep Tayyip Erdogan warned President Donald Trump against following through with electoral pledges to move the American embassy to the contested city. “Mr. Trump, Jerusalem is the red line of Muslims,” Erdogan stated in a televised address today, saying Turkey would consider breaking off ties with Israel altogether.

The comments prompted swift reactions from Israeli leaders. Education Minister Naftali Bennett, a senior partner in Prime Minister Benjamin Netanyahu’s coalition government, said, “Erdogan does not miss an opportunity to attack Israel. Israel will advance its goals, including the recognition of united Jerusalem as the capital of the state of Israel. … It's better to have a united Jerusalem than Erdogan’s sympathy.”

The war of words is likely to escalate should Trump, as some administration officials have suggested, announce tomorrow that the United States is relocating its embassy in Tel Aviv to Jerusalem, which the Palestinians claim for their own.

In a rare instance of solidarity with Erdogan, Turkey’s main pro-secular opposition Republican People’s Party (CHP) has also aired its misgivings. Ozturk Yilmaz, a CHP lawmaker who briefed reporters after meetings with White House officials, said that he had conveyed his party’s concerns about a “new intifada.”

Whatever the outcome, Erdogan seems eager to seize on the affair to shore up his credentials as a global defender of Islam even at the risk of further tension with the United States and putting relations with Israel back on ice.

Soner Cagaptay is the director of the Turkish Research Program at the Washington Institute for Near East Policy and the author of “The New Sultan: Erdogan and the Crisis of Modern Turkey.” He told Al-Monitor, “Erdogan’s base is saturated. He barely reached 50% in the referendum [on replacing Turkey’s parliamentary system with an executive presidency]. He will use this to stoke his conservative Islamist base and to project himself as an international actor who rallies global Islamic opinion behind him.”

Before Erdogan and his Islam-based Justice and Development Party shot to single-party rule in 2002, Turkey and Israel were close allies. They held joint military drills, Israeli fighter pilots would train over the Konya plain in central Anatolia and Israeli tourists would flock to Turkey.

Erdogan began to steadily chip away at the once thriving alliance and relations collapsed altogether in 2010, when Israeli commandos stormed the Mavi Marmara, part of a flotilla of ships carrying aid to the Gaza strip in defiance of an Israeli blockade. Nine Turkish activists were killed in the ensuing violence. Relations were downgraded and ambassadors withdrawn.

It took six years for the rift to end, with plenty of nudging from the Barack Obama administration.

Another row with Israel will only further diminish Turkey’s rapidly shrinking standing in Congress, where the imprisonment since October 2016 of American pastor Andrew Brunson on outlandish charges of seeking to overthrow the Turkish government has provoked an outcry.

A delegation from the US Commission on International Religious Freedom, a bipartisan federal commission, was allowed to meet Brunson a year after his incarceration in Izmir’s Kiriklar jail. The commission's vice chairwoman, Sandra Jolley, reported that Brunson, who spent 24 hours a day in solitary confinement, had lost over 50 pounds and “lives in a world of psychic and physical dislocation.” A congressional staffer speaking on condition of strict anonymity told Al-Monitor, “If Brunson dies in a Turkish cell, all hell will break loose.”

But will the increasingly erratic Erdogan care?

Cagaptay warned that if Trump moves forward with his pledges, “The optics could get really ugly. There will be lots of burnings of American and Israeli flags inside Turkey but also by thousands of members of the Turkish diaspora in Europe who support Erdogan.” Cagaptay concluded, “It will be another step in Turkey’s drift away from the West.”