Democratic lawmakers made clear they will oppose any move to slash assistance to countries that vote at the United Nations to criticize the president's position on Jerusalem. 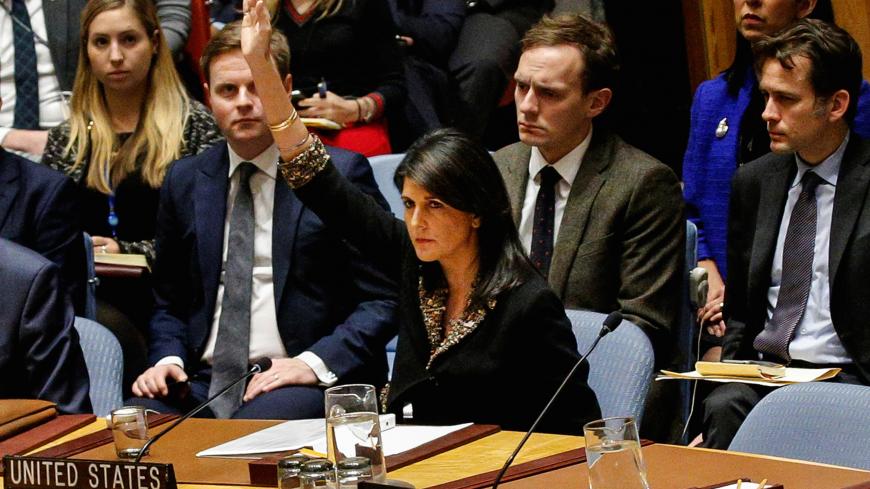 US Ambassador to the United Nations Nikki Haley vetoes an Egyptian-drafted resolution regarding recent decisions concerning the status of Jerusalem, during the UN Security Council meeting on the situation in the Middle East, including Palestine, at UN Headquarters in New York City, Dec. 18, 2017. - REUTERS/Brendan McDermid

US President Donald Trump’s threat to cut foreign aid to countries that criticize his position on Jerusalem at the United Nations is drawing fierce condemnation from key Democratic lawmakers, raising doubts that Congress would allow him to carry it out.

Trump suggested today that any country voting in favor of Thursday's nonbinding resolution opposing the US recognition of Jerusalem as the capital of Israel could lose US foreign assistance, potentially putting vulnerable US allies in the Middle East at risk. US Ambassador to the UN Nikki Haley, after sending letters to UN members warning them of consequences if they vote the wrong way, followed suit today with a tweet endorsing the president's statement of "Let them vote against us, we'll save a lot."

“The effort by President Trump and Ambassador Haley to threaten nations who might dare to express disagreement in the United Nations is not a wise or sustainable tactic, and it will make cooperation more difficult in the future,” said Rep. David Price, D-N.C., a member of the House panel overseeing foreign aid spending.

Even members of Congress who support recognizing Jerusalem as Israel’s capital have raised concerns about the administration’s diplomatic approach.

"I support the American position that this resolution shouldn’t be passed, but the way the president handled the announcement makes it much more difficult to get the type of vote that we would like to see at the United Nations,” said Sen. Ben Cardin, D-Md., the top Democrat on the Senate Foreign Relations Committee.

“We don’t always win United Nations votes, but we’ve been coming closer on a lot of these votes,” added Cardin. “I think the way the president handled the announcement will isolate Israel even more and the United States more.”

“All of our allies on the Security Council supported a similar resolution,” Connolly told Al-Monitor. "Shall we cut off all diplomatic relations and pull in the drawbridge while we’re at it?”

“It is no surprise that our allies and partners strongly disagree with his actions,” said McCollum. “I oppose any attempt to weaken our relationships with governments that object to President Trump’s decision.”

Several Arab states, Turkey and other countries in the Organization of Islamic Cooperation called for a rare emergency UN session after the United States vetoed a similar resolution in the Security Council earlier this week. The United States ended up being outnumbered 14-1 on that vote, prompting Trump to threaten US aid cuts.

“We’re watching those votes,” Trump said during a Cabinet meeting at the White House today. “This isn’t like it used to be where they could vote against you and then you pay them hundreds of millions of dollars.”

From the outset, the Trump administration has sought steep foreign aid cuts across the board as part of its “America First” agenda. Ironically, the preponderance of US aid to the Middle East and North Africa consists of military aid earmarked for beneficiary states to buy US-made military equipment.

Congress earlier this year overwhelmingly rejected aid cuts proposed in the administration's State Department budget request. Instead, lawmakers stipulated that aid levels for Jordan, Egypt, Tunisia and Morocco — all countries likely to vote against the United States at the UN — should remain “at or above current levels.”